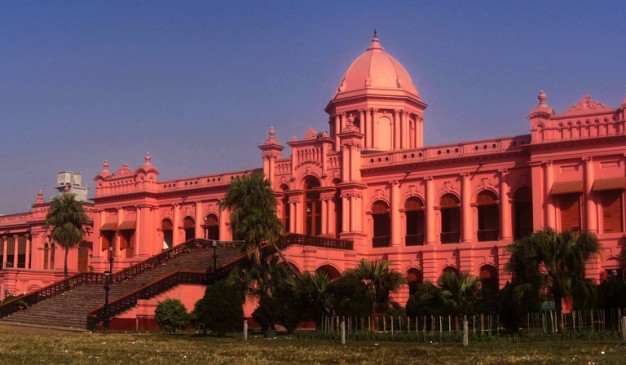 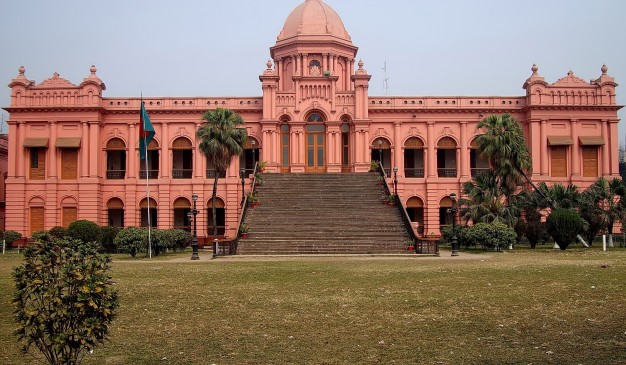 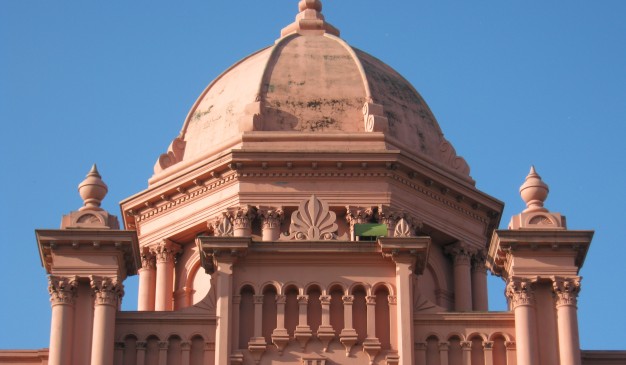 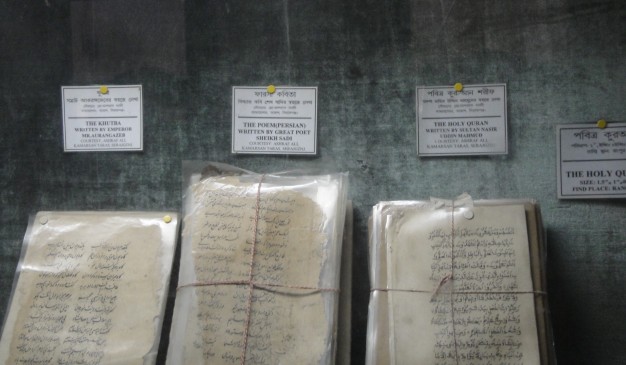 Ahsan Manzil (আহসান মঞ্জিল, Ahsan Monjil) was the official residential and seat of the Dhaka Nawab Family. This magnificent building is situated at Kumartoli along the banks of the Buriganga River in Dhaka, Bangladesh. The construction of this palace was started in 1859 and completed in 1872. It was constructed in the Indo-Saracenic Revival architecture. It has been designated as a national museum.

In Mughal era, there was a garden house of Sheikh Enayet Ullah, the landlord of Jamalpur porgona (district), in this place. Sheikh Enayet Ullah was a very charming person. He acquired a very big area in Kumortuli (Kumartuli) and included it in his garden house. Here he built a beautiful palace and named it “Rongmohol”. He used to enjoy here keeping beautiful girls collecting from the country and abroad, dressing them with gorgeous dresses and expensive ornaments. There is a saying that, the foujdar of Dhaka (representative of mughal emperor) in that time was attracted to one of the beautiful girls among them. He invited Sheikh Enayet Ullah in a party one night and killed him in a conspiracy when he was returning home. That girl also committed suicide in anger and sorrow. There was a grave of Sheikh Enayet Ullah in the north-east corner of the palace yard which was ruined in the beginning of 20th century.

In that time, the French became very wealthy by doing business here in competition with the English and other European companies. They made a big palace and dug a pond for sweet water in the newly purchased property. The pond still exists in the compound of Ahsan Manjil which was called “Les Jalla” in that time. In the English-French war, French got defeated and all their properties were captured by the English. In the 22nd June of 1757, the French left the trading house with a fleet of 35 boats from the river station of Buriganga in front of Kumartuli.

In 1785, the French transferred the property to a French tradesman named Mr. Champigni, and retaken it at 1801. According to Paris agreement of 1814, the French claimed all their left properties at Dhaka, and in 1827 the property was again returned to the French. For the increasing power of the English, the French was forced to left subcontinent. They decided to sell all their properties in Dhaka. So in 1830, the trading house of Kumartuli was purchased by the established landlord of Dhaka Khwaja Alimullah.

After some renovation work, the trading house became the residence of Khwaja Alimullah. In his time, a stable and a family mosque was added in the compound. After his death, his son Khwaja Abdul Gani made a great flourish to the property, and named it “Ahsan Manjil” on his son Ahsan Ullah. In the east side of the old building, he made a new building with a different design, and also done great renovation work to the old building. Since then, the old building was called “Ondor Mohol” and the new building as “Rong mohol”.

In the evening of 7 April 1888, a devastating tornado hit Dhaka city causing great damage. Ahsan Manjil was severely damaged and abandoned. An English engineer from Kolkata arrived here to examine the palace. He gave opinion that except the “Rangmahal”, all other parts of the palace have to reconstruct. So Khwaja Abdul Gani and his son Ahsanullah turned their full attention to rebuild the palace. Both of the building was reconstructed during that time with a new design and supervised by the local engineer Gobinda Chandra Roy.

The old French building was reconstructed to a two storied building keeping similarity to the Rangmahal. A gangway was made with wood connecting the first floor of two building. The most beautiful thing made in this time was the dome, which made the palace so beautiful. After the death of Khwaja Ahsanullah in 1901, the glory of Ahsan Manjil was ended. His successors couldn’t continue the glory because of the internal family quarrel. They rented different parts of the palace to tenants, who actually made it a slum. In 1952, govt. acquired the property and left in supervision of the Dhaka Nawab court. In 1985, Dhaka National Museum acquired the property and made it a museum.

Beside enjoying the enchanting view of the Ahsan Manjil, you can go for a boat trip from the Shadarghat boat terminal which is a few minutes away. If you feel like knowing about the Bangladesh history you can always got to the liberation war museum or the national museum. Capture the priceless moments by taking photos and enjoy the natural beauty and the historical presence.

Mahatma Karamchand Gandhi, the father of India, was the pioneer of the liberation movement of India from the British Empire. He visited Noakhali in 1946 and the place he lived is now turned into a memorial complex situated 25 kilometers away from the Noakhali District.

The very brief history of India: In 1946, just before the liberation of Pakistan from India, there were some social anarchy began in the undivided India. At that time, he decided to visit different places where the massacre started. According to his plan, he visited Noakhali and gave a peace speech. Gandhi was interested to set up a technical training institute at "Joyag" area for the rural uneducated people because he believed that only education can change the mind of a man and keep themselves away from being involved in crimes like killing/looting etc. At that time, a local lawyer, named Hemanta Kumar invited him to stay at his home. Hemanta was believed as the first barrister in this region on that time. He donated his land and building to Gandhiji and Gandhiji was pleased to him too. Gandhi used to drink only goat milk and he always carried a goat with his team. One night, the goat of Gandhi was stolen from the complex. After that he returned to Bihar (India) but willing to come again to continue the activities of the vocational training center. After that, Pakistan got independence from India. In 1948, Mahatma Gandhi was assassinated by fire and never managed to came back to Noakhali before his death. That was his only visit. In 1971, the east part of Pakistan declared themselves independent and named Bangladesh. Noakhali belongs to Bangladesh now. The Institute is now running autonomously in collaboration with the Bangladesh government.

Current Condition of Gandhi Ashram Trust: After his death, the Pakistani government tried to destroy his memories and work. The Pakistanis always hated Gandhi and all the Hindu people. During the period of 1947-1971, Pakistani people and their supporters forced Hindus to settle in India and destroyed their properties. After 1971, the Independent country Bangladesh began to preserve his history. The Vocational instituted was then named "Gandhi Ashram Trust" and started to serve local rural people. But now after 2000, the training activities started to decline. People are much more interested to move towards to a city now. Now the building is converted into a museum where lots of photos of Gandhi's earlier life is found.

The Ashram Trust is located in Joyag, Sonaimuri, Noakhali district. It is actually situated at Noakhali - Ramganj (Laksmipur) highway. There are some other branches of Gandhi Ashram are established to achieve the mission of Mahatma Gandhi in many different districts of Bangladesh. But actually the historical place where Gandhi resided in Bangladesh is in Noakhali.

MAG Osmani Museum is a museum in Sylhet, Bangladesh. The ancestors’ home of Bangabir General Muhammad Ataul Gani Osmani, the Commander-in-Chief of Bangladesh Forces (12 April 1971 - 7 April 1972) has been transformed into today’s famous “Osmani Museum”. It is situated at the heart (Dhopa Dighir Par) of the Sylhet City Corporation area in renowned Sylhet Division of Bangladesh.

It is about 12 km from the Sylhet Osmani International Airport and 3 km from the Sylhet Railway Station. Maintained and organized by the Bangladesh National Museum, this museum has been established to pay rich tribute to the great hero of Bangladesh for his outstanding accomplishments. This will surely act as a stimulus to the future generations. The foundation stone was laid on 16 February 1985 and it was inaugurated on 4 March 1987 by the then president of Bangladesh H M Ershad.

‘Nur Manzil’ is by and large a tin shade building having few rooms and other amenities including an exquisite piazza in the front. One has to cross few meters from the main gate to reach the Museum. A huge portrait of the General, placed in the center of the entrance hall greets the visitors. Receptionist welcomes the guests. One has to write name and address in the register placed in the reception. A befitting sitting place is also available in the lobby.

This historic museum comprises three galleries, where personal belongings of General Osmani and a good number of historical photographs are preserved befittingly. On both western and eastern side of the building there exist two small rooms, where Assistant Keeper and Care Taker’s office are situated.

Our National poet Kazi Nazrul Islam was born in Churulia of Burdwan(বর্ধমান) district, West Bengal on May 25, 1899. He spent a year of his boyhood in Kazir Shimla (কাজীর শিমলা) and Darirampur (দরিরামপুর) in Trishal, Mymensingh. He studied at Darirampur High School when he was in Class Seven and lodged at the house of Bechutia Bepari (বিচুতিয়া বেপারী) at Namapara, as his school was far from Kazir Shimla. In that regard, Namapara is given more importance than Kazir Shimla, say locals. Later, Kazi Rafizullah, a sub-inspector of police, took Nazrul to his village home at Kazir Shimla in 1914.

Nazrul memorabilia housed at the two center owns gramophones and records (released by His Masters Voice Company); manuscripts in Bengali, English, Hindi and Urdu and some rare black and white photographs of the poet. The memorabilia can be seen on the second floor of the center. The memorial centres also house a library with books authored by Nazrul and literary works on Nazrul by other writers.

Though the memorabilia collection is meagre, visitors flock enthusiastically to have a view. As every year, there has been a rush of visitors to the two Nazrul Smriti Kendra (memorial centres) at Kazir Shimla village and Darirampur in Trishal just ahead of the birth anniversary of the National Poet. The Postal Museum was inaugurated in 1985 but it… 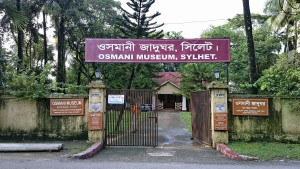 MAG Osmani Museum is a museum in…