Alexander Castle is one of the most amazing and renowned structure in Mymensingh District. It was built by Maharaja Suryo Kanta Acharya Chowdhury(মহারাজ সুর্যকান্ত আচার্য চৌধুরী) in 1879 in the memory of the 1st zilla magistrate of Mymensingh Mr. N .S Alexander at the time of Jubili festival. It covers an area of 27.155 acres.

It is a nice small archaic building having two Greek statue at both sides of the front gate. Though the arms of those statues are currently broken, but still those looks great. The whole building is placed over a high plinth, probably to avoid the flood from the nearness river.

It cost 45000 taka at that time. Alexander Castle is a two storied building made by metals and woods in a high concrete base. This building was used as a rest house for the guests of Maharaja Maharaja Soshi Kanta Acharya Chowdhury. Many great personalities of the world stayed at this castle when visiting Mymensingh city. Nobel Laureate poet Rabindranath Tagore arrived in Mymensingh around the midday of 15 February 1926. He stayed in the Alexander Castle as a guest for 4days. Mahatma Gandhi also stayed in this castle in 1926.

Lord carzon, Chittaranjan Das, Nawab Sir Salimullah, Kamal Pasha also visited Alexander Castle. This house was decorated by royal furnitures and items at that time. There is a big field in front of this house. You can see two fascinating silver statue which makes the place more beautiful. There is also a big garden and a pond still remains behind the castle. It is said that Maharaja used to keep big cats in his garden so he surrounded the garden with big still cages.At present this house is being used as library of teachers training college(male) in Mymensingh.

It is located at the main city, also near to the great river Brahmaputra(ব্রহ্মপুত্র নদ). Any visitor staying in the town can easily visit this area by having a walk or using a rickshaw. It is currently being used as a library of Teacher’s Training College (Male). it is also very near to the Town hall mor(মোড়)of the town.

A traveler can enjoy the architectural beauty of this unique structure. There is a complex of old buildings around this feature, which shouldn’t be missed while traveling here.

There are so many hotels and restaurants available in Mymensingh Town. You may check any of those.

Chittagong has two railway stations. One is new and another is old, which was built by the British Government. There is a highway beside the station which is called station road. This old railway station is very near from the hotel "Golden Inn". Basically it’s not a tourist place but its old red structure can lure you to visit the station.

This station is not function for long road journey. Some local train take a stoppage here. Also some goods caring trail used to load or unload their goods at this place.

Boro Kuthi is located in Shaheb bazar of  Rajshahi town. An attempt was taken by Rajshahi City Corporation for turning the historical Dutch building into a heritage sight. There are 12 rooms here and it is 2 storied. Dutch and British traders used it for trading silk. After demise of Nawab Sirajud Dowla in 1757 it was bought by East Indian Company. Later it was sold to Robert Watson and Company. After 1947 partition Government used it as their supply center. In 1953 it was taken over by Rajshahi University. Chittagong has two railway stations. One is… 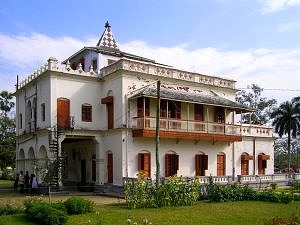