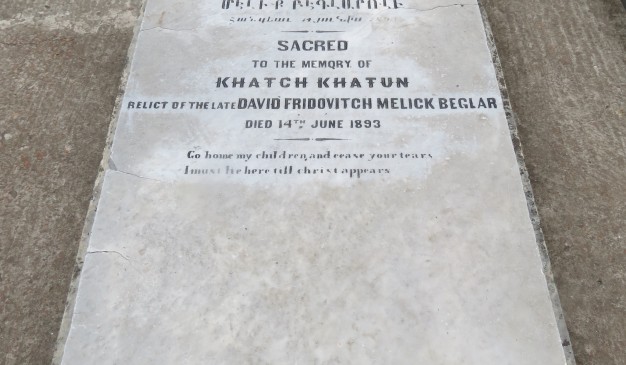 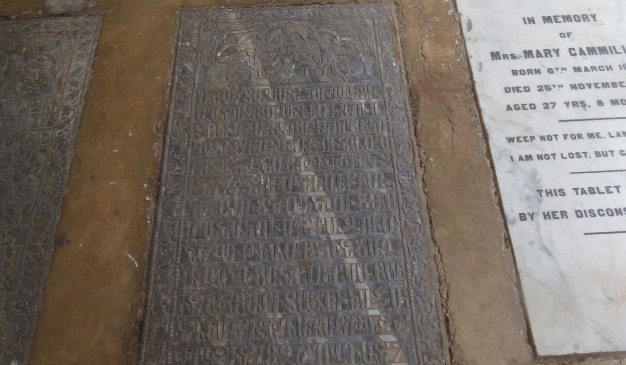 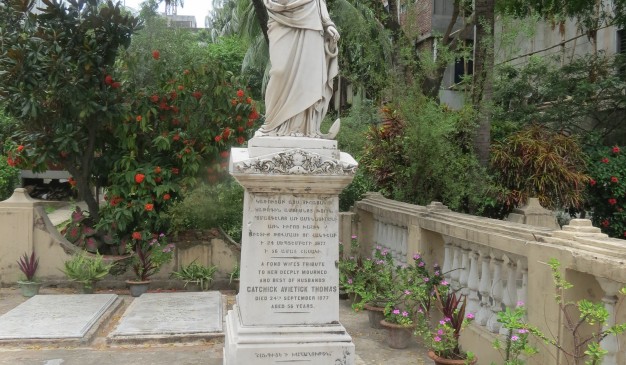 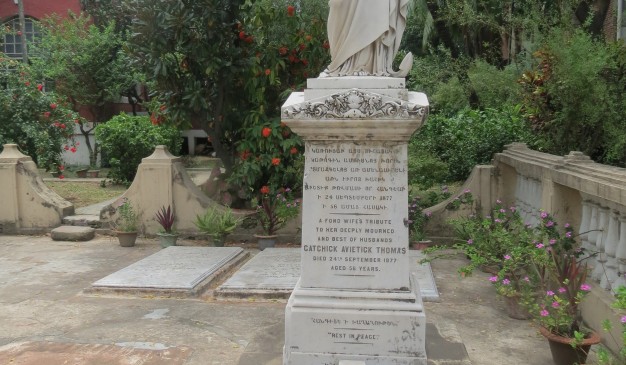 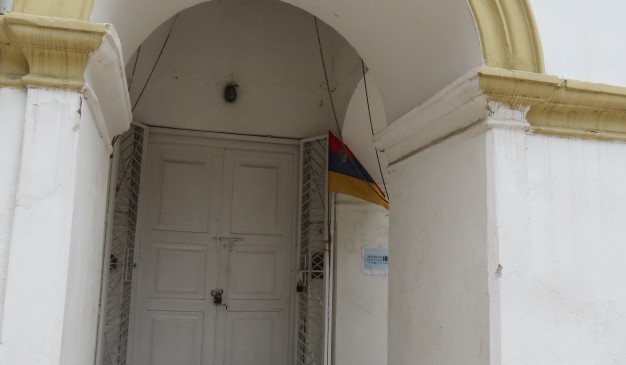 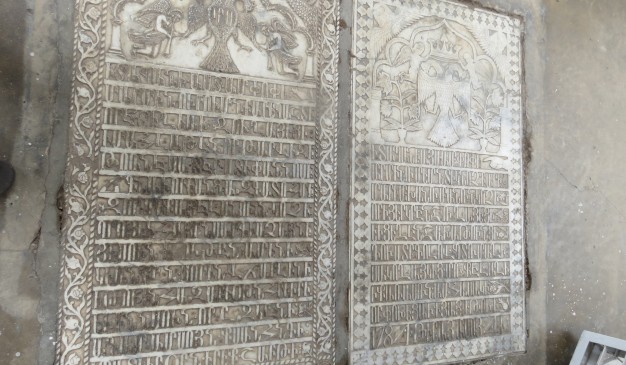 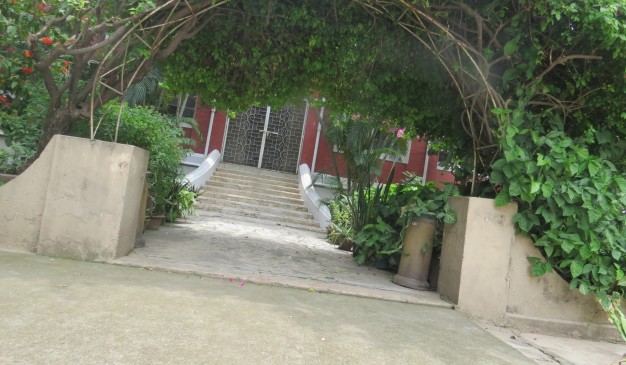 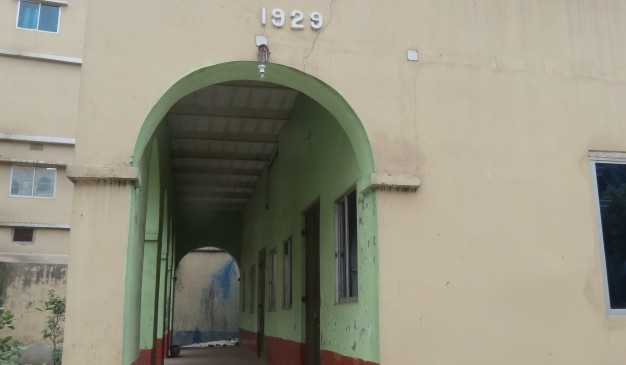 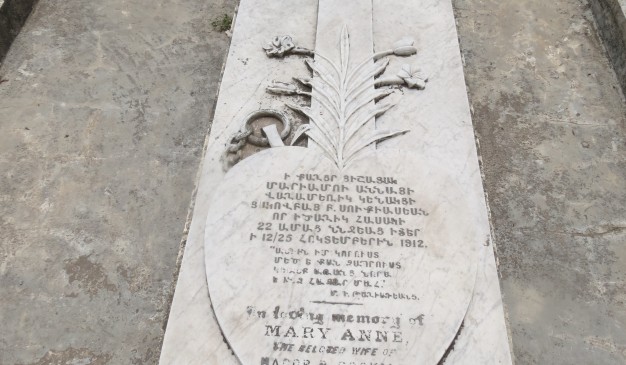 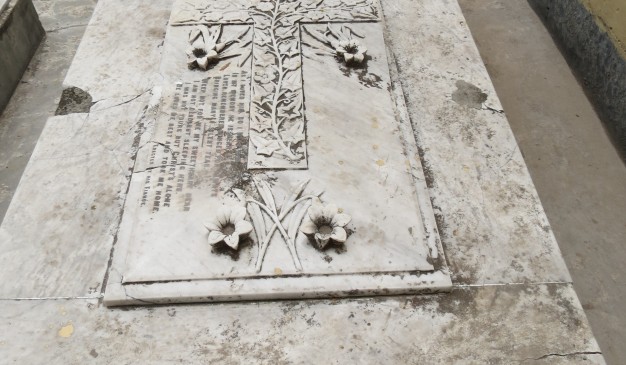 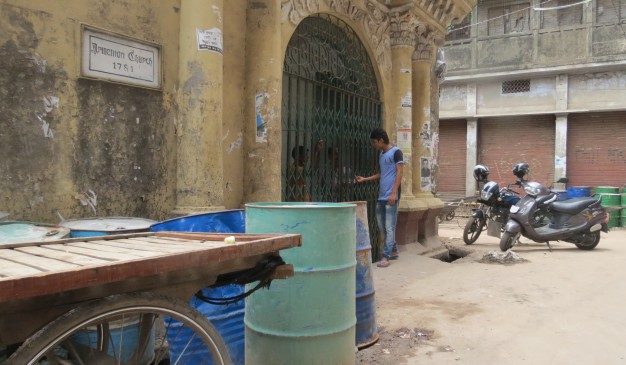 The evidence says about Armenian community in the region during 17th to 18th century and their existence. Armenian Church was build in 1781 on Armenian Street in Armanitola. The site was an American graveyard before before the church built. Agaminus Catachik, an Armenian, gave away the land to build the church. Michel Cerkess, Okotavata Setoor Sevorg, Aga Amnius, and Merkers Poges helped build the church.

Mother Teresa stayed in this church during a visit to Dhaka.

In the old graveyard, among the 350 people buried there, a statue stands at the grave of Catachik Avatik Thomas, portraying his wife. The statue was bought from Kolkata and the grave is inscribed with the words “Best of Husband.” Following the domination of their homeland by Persian powers of the time, Armenians were sent by their new rulers to the Bengal region for both political and economic reasons. Although the Armenian presence in South Asia is now insignificant, their presence in Dhaka dates back to the 17th century. Armenians came to Dhaka for business, and have been acknowledged for displaying a passion for trade comparable to that of the Bengalis of the time. In Dhaka, Armenian merchants traded in jute and leather, and profitability in these businesses convinced some to move permanently to Bangladesh. The area where they lived became known as Armanitola.

In the fifty years following the church’s construction, a clock tower was erected on its western side. Allegedly, the clock could be heard four miles away, and people synchronized their watches with the sound of the tower’s bell. The clock stopped in 1880, and an earthquake destroyed the tower in 1897. The Armenian played a prominent part in the jute trade in Dhaka and are reputed to be the pioneers of that trade in the second half of the 19th century. Today, the last Armenian that takes cares of the church is Mikhail Hopcef Martirossian (Micheal Joseph Martin). He was also one of the Armenian who was in the jute trade.

This place is known as American Apostolic Church of the Holy Resurrection, located at Armanitola, Old Town Dhaka. Take local transports to visit this holy place.

Referred to where to eat in Dhaka, click here.

Holy Cross Church is located is at Lakkhibazar (laxmibazar/lokkhibazar). It’s a small one but very easy to locate it. It’s exactly between the St Gregory's High School and St Francis Girls High School. You can enter the church from the both side of the school.

This is very small one, and it is written at the church gate "only Christians are allowed to enter". Anyway the gate was locked. But you can watch the church from outside. The style of the church is a bit older one. Don't know when it was built, but for sure it was built somewhere around the birth of the school.

Saint Thomas Church is an Anglican Church which is also known as The Church of Bangladesh. The church premise was in an area of lush greeneries with the famous Bahadur Shah Park at a stone’s throw distance on the south. The north-south axial Nawabpur Road/Johnson Road, the most important commercial street connecting the old part of the city with the new, is on the west and separated the area from the court, Bank, DC's office and Jagannath University buildings across it. In fact the church overlooking the greens is a major focal of the city Centre in the nineteenth century.

This church was built in 1819, and inaugurated by Bishop Reginald Heber of Kolkata (Calcutta) on the 10th of July in 1824 while he was on a visit to Dhaka. The church is serving as a cathedral church since 1951. It is said that the convicts from Dhaka Jail gave their labor to build this church as well the church of Bangladesh continues the history of the movement of Protestants into India early in the 19th century. The Protestant community in what is now Bangladesh has been dominated by the Baptists, but the Church of England and the Presbyterians were also active. In 1947 Bangladesh became the eastern province of bifurcated nation of Pakistan, but in 1972 it officially separated as an independent nation. In 1970, the Presbyterians and Anglicans in Bangladesh united (as part of the general union of Christian in Pakistan) to form the Diocese of Dhaka of the Church of Pakistan. The creation of Bangladesh involved a civil war and the development of harsh relation between two countries. Although officially continuing as a Diocese of the Church of Pakistan for some years, the church in Bangladesh began almost immediately to function as an autonomous organization which gradually emerged as the independent Church of Bangladesh (St Thomas Church). The church is led by most reverend Paul S. Sarkar who in January 2003 became the third bishop of the church of Bangladesh. The 71 parishes are divided into 2 dioceses. The church has approximately 15,600 members (2005). It has been a member of the World Council of Churches since 1975 and functions as part of the larger worldwide Anglican Communion.The photo was taken by Mr. Fritz Kapp in 1904.

The attraction of this building, built after the style of east churches, with a square clock tower with arch windows on its walls. A small porch leads to the entrance of the church supported on four columns which are of perpendicular gothic design on top of the entrance. Small square parapets are used on the roof. There are two columns at the back of the rectangular nave which leads to a pulpit through an arch. The pulpit is rectangular and has a brass cross on the wall at the back. The altar is constructed of wood and also has a brass cross on top of it. The location of the altar is at the east end. There are elegant curved chairs for congregation. A stone font on the back of the nave. The walls of the church are adorned with stone tablets commemorating some of the members of the church. The roofs of the verandas are set upon sloppy korhikath.

The rectangular hall room is very much tidy and two piers with grooves are easily visible surpassing other things and these piers do not carry any weight. The roof used wooden battens on iron joists; the floor have tiles. The delicate stone and brick works of this white plastered building are still as immaculate as it has been for nearly two centuries. Even most of the thick teak furniture, altar, and ablution bowl (for baptizing) in marble are still unblemished and in good working condition. However, the open colonnades around two sides of the nave (central axial hall) were walled up later. In 2005 the church authority has undertaken a massive renovation of the building. Though the church is small in size, it is one of the most attractive ones in Bangladesh. The rectangular flat-roof steeple rises above the roof in two stages. ) [2] => Array ( [name] => {:en}Patharghata Catholic Church{:}{:bn}পাথরঘাটা ক্যাথলিক গির্জা{:} [post_id] => 7030 [post_link] => http://offroadbangladesh.com/places/patharghata-catholic-church/ [thumb_link] => http://offroadbangladesh.com/wp-content/uploads/2015/04/Patharghata-Catholic-Church3-240x300.jpg [post_content] => {:en}

This church has a graveyard inside it. People left their beloved person at this grave, and each of the tomb is epitaph by the word from their heart. When you'll read those notes from the tomb, it will just touch your emotion.

Most interesting thing from the church is, it has a grave and where "Sir Henry Leland Harrison" lied. The grave was made by white Marble Stone. Local says, it is an exceptional grave of the church, as the tomb has stairs as passageway inside.

Henry Leland Harrison was a writer, and his book's name is "Bengal Embankment Manual, Containing an Account of the Action of the Government in Dealing with Embankments and Watercourses." It was first published from Calcutta, Bengal Secretariat Press in 1875. From the tomb of the Harrison, it was found that the fellow was died after suffering from a Cholera at 5th May 1892. Henry Harrison was born at February 5th 1837. He was only 55 years of old when He died.

Hasnabad Holy Rosary Church is considered as one of the oldest Christian establishments of Dhaka, was established by Portuguese missionaries before the advent of British colonial rulers in India. Traders came to Bengal in 1579 after getting farman a royal decree from Mughal Emperor akbar (1556-1605) for trading, preaching of Christian religion and building of churches there freely. By 1580, a Portuguese settlement including trading houses and places of worship was developed in Dhaka City.

The Portuguese catholic Augustinians constructed two churches named Holy Rosary at Hijli in the 16th century. The Portuguese followers of St. Augustine also built up Churches in Chittagong in 1601, Baleshwar and Rangamati in 1640, Bakergonj (Barisal) in 1764, Hasnabad in 1777 and Tejgaon (Dhaka). This church is located at Hashnabad, 40 kilometres south-west of Dhaka. It is the seventh church in Bengal area.

There is a big open space in front of the church. If someone watches it from the opposite of the ground, it seems like a painted picture. While entering into the compound, firstly visitors will notice Amal Ganguly memorial hall. 'Theotonious'-the servant of God, it highlights on the board in large letters. Opposite of memorial, there is a hostel for sisters named St. Eufrejis Convent. The main church building is adjoining the convent with two minarets. It is such a beautiful art of architecture by the Europeans in Bangladesh.

There is a graveyard at inner side. A big pond is also located in the east. A lot of blooming roses welcome the religious people from the garden. The statue of crucified Jesus Christ reminds how he established his religion and sacrificed his life for the welfare of human kind. The whole church is decorated on the special occasions like Christmas and Star Sunday. In those days, visitors From different places gather there in large number to celebrate. Holy Cross Church is located is at… Hasnabad Holy Rosary Church is considered as one…