In Bangladesh, the Brahmaputra (ব্রহ্মপুত্র) river is joined by the Teesta (তিস্তা) river (or Tista), one of its largest tributaries. Below the Tista, the Brahmaputra splits into two distributary branches. The western branch, which contains the majority of the river’s flow, continues due south as the Jamuna to merge with the lower Ganges called as Padma river. The eastern branch formerly the larger, but now much smaller is called the lower or old Brahmaputra.

Mymensingh (ময়মনসিংহ) district stands just beside the old Brahmaputra river. It curves southeast to join the Meghna River near Dhaka. The Padma and Meghna converge near Chandpur and flow out into the Bay of Bengal. This final part of the river is called Meghna.

The Brahmaputra enters the plains of Bangladesh after turning south around the Garo Hills below Dhuburi, India. After flowing past Chilmari, Bangladesh, it is joined on its right bank by the Tista river and then follows a 150 miles (240km) course due south as the Jamuna river. South of Gaibandha, the Old Brahmaputra leaves the left bank of the main stream and flows past Jamalpur and Mymensingh to join the Meghna river at Bhairab Bazar.

There are lot of bridges over this river at several districts. Near the Mymensingh town, you’ll find two bridges. One is for the road transports, and other one is only for railway service. From one bridge other one can be seen and a traveler can enjoy the whole view of river while walking through a passage just beside the river.

Mymensingh city/town just stands beside the river Brahmaputra. You can enjoy view of the river while walking through the passage just beside the river. Besides, you can also enjoy the beauty of river from Bipin Park ( Boro Bazar Road), Jaynul Abedin Park and the botanical garden of Bangladesh Agricultural University (BAU).

For nature loving traveler it’s an appropriate place to spend leisure time. You can also enjoy the breeze which will certainly make you feel refreshed and relaxed.

In Mymensingh city there is a plenty of options for Hotels and Restaurants. A traveler can find a good one in according to his/her demand.

Mighty river Meghna's branch is located eastward to the Narsingdi Sadar. It is used as a river ghat to move in various directions from Narsingdi District. If someone pays a visit there at the Ghat, he/she may observe a cluster of wood made engine boats awaiting for passengers. It is a place largely of gatherings all the day long. The launch terminal is just steps away from this Ghat.

Pang Thu Mai Village is a bordering village. It is located in Gowainghat district. This village looks fabulous under the hills of Indian state of Meghalaya. Many hills and waterfalls from Meghalaya form the river Peain. The land for agricultural works is very large inside the village. The Barahill falls is located actually in between Bangladesh-India border. The waterfall belongs to India and the lake belongs to Bangladesh. The atmosphere of this place is electric. You can see the range of Meghalaya hills with thick green vegetation. It is indeed a unique destination for tourists of all tiers.

Baulai River (বওলাই নদী), it is a river near the Tanguar Haor. It’s a very calm & charming river. Both banks of the river have a series of beautiful trees which has the survival capabilities under water. In winder season, you have to Tanguar Haor through the river.

Birds like White Egret (সাদাবক), Pankouri (পানকৌরি), Common Seagull (গাংচিল), Kingfisher (মাছরাঙ্গা), are seen in the winter season. Baulai River (বওলাইনদী) is the only way for transporting for the local People. Sometimes, you’ll see no people around the river for 2-3 miles. Meghalaya hill of India is the place of origin of this river. It flowed between the Tanguar Haor and joined with Surma River afterwards. 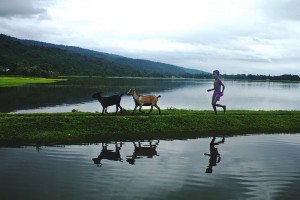 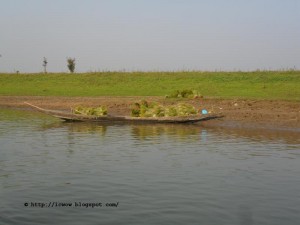