Chowk Bazar Shahi Mosque also known as Chowk Mosque is one of the oldest Mosques in Dhaka. It is located in the Chowk Bazar area of the old town of Dhaka, south to the current city center.

The mosque was constructed in 1676 by Subahdar Shayesta Khan (সুবাহদার শায়েস্তা খান). It is called ‘Shahi Mosque’ as it is founded by Subahdar Shayesta Khan. The mosque is built above a raised platform. The three domed mosque above the platform, now transformed into a multi-storied structure was originally a copy of Shayesta Khan’s another three domed mosque at the Mitford Hospital compound near the Buriganga River. Some square shaped rooms may be built for Imam and for students of the Madrashah. As a result of several renovation & reconstruction work, this mosque has lost its ancient original view.

History: This Mosque was constructed in 1676, as noted by an inscription in the Persian language over a gateway. The inscription attributes the project to Subahdar Shaista Khan. So far, this is known as the earliest dated mosque in the History of Muslim Architecture in Bengal, built on a high vaulted platform. Its architectural design was perhaps influenced by Tughlaq Architectures; such as Khirki Masjid or Kalan Mosque of Delhi. Influenced by this structure, some other mosques were built in Dhaka and Murshidabad.

Architectural Properties: The western half of the 3.05 meter high vaulted platform (28.65 meter from north to south and 24.38 meter from east to west) is occupied by the original three-domed mosque. It measures, inclusive of the four octagonal towers on the exterior angles, 16.15 meter by 7.92 meter. There are three four-centered archways in the east, all opening out under half-domed vaults. The half-domed vault of the central archway still contains beautiful Muqarnas works in stucco.

Corresponding to the three eastern entrances, there are three Mihrabs inside the west wall, all now redesigned. The central mihrab still has a semi-octagonal aperture, while its flanking counterparts are rectangular in design. The mihrabs are now all studded with lustrous pieces of enamel. The rectangular frames enclosing the mihrabs are now topped by rows of painted cresting. The floor of the mosque is now laid with marble.

Three bays divides interior view of this Mosque- the central one square shaped and the side ones are rectangular. All these bays were covered with domes, the central one being bigger than its flanking counterparts. This can be deduced from the newly built three-domed prayer chamber exactly above the original one, where the central dome has been kept larger than the side ones.

The vaulted rooms, all round underneath the platform, are either square or rectangular in shape. Many of them are now let out to shopkeepers and others are still being used as accommodation. The under ceilings of these rooms are flat on the top and barrel-shaped at the sides.

Very uniquely designed and Space utilized Madrasa & Mosque: The promenade around the three domed prayer chamber, since there was no separate structure for study purpose, might have been used for open-air classes and the vaulted room with book-shelves on their walls underneath the platform may have been designed to provide residential accommodation for those who used to teach and study here. In that perspective, Chawk Mosque may be regarded as the first known example of Residential Madrasa Mosque.

It is an ingenious way of accommodating two structures-a madrasa and a mosque in a single building which not only saved space but also a considerable amount of money.

From Gulistan Bus stop it is near about 3 Km south-west. You can ride on Rickshaw or auto-rickshaw to reach there. If your first destination is Lalbagh Fort, then it is just 1.3 km south-east ward from the Fort.

As soon as you get there in the Mosque, try to figure out the real picture of this old Mosque and Madrasa. Experience the artistic beauty of Mughol architecture. If you are kind of food lover, then there are so many options awaiting for you.

Referred to where to eat in Dhaka, click here

Atkandi Nilkuthi Mosque (আটকান্দি নীলকুঠি মসজিদ ) is situated in the Atkandi village of Raypura upazila, Narsingdi. It was built by a man named ‘Alim Uddin’. Alim Uddin built this Mosque just beside the grave yard of his wife ‘Sadetunnesa’. To build this Mughal stylistic Mosque he brought some masons from far land Mohishur, India. Some even compare it with Tajmahal, given its architectural style and the emotions behind it.

Alim Uddin completed his education on Islamic religion from Deobond and later worked as Teacher in a madrasa, conducted by Khawaza Family in Dhaka. Later in 18th century, he built this Mosque, however the exact date of founding this Mosque could not be determined.

It is a rectangular shaped Mosque. Which can be divided into three specific spatial context. We can exemplify it as below- 1. Inner zone 2. Exterior Corridor zone 3. Exterior Porch zone (under open sky)

Inner Zone of this Mosque contains three domes, and a Mihrab. Among these, three bulbous domes, among which the middle one is the biggest. The inner zone contains two entrances.

Exterior porch zone of this mosque was built considering the large gathering which take place. It’s a square shaped plastered floor, with one feet high bordered wall all around the porch. It contains a main gateway to enter into the Mosque.

In different kind of public occasions, like in the eve of Eid-festivals and in common vacations people from different parts of the country come here to visit this place. On the southern part of this Mosque there is an old Ghat (in the edge of a river) which has stepped down to the branch of Meghna river. So far we know, it was built by G.P. Wize when this region was a place to plant indigo in a massive scale.

Present condition of this Mosque is not so consistent in a sense of building strength. It is in very sensitive condition, where it is randomly being used without any treatment of conservation & preservation. That’s why we can observe some deterioration in the brick building both in Exterior & interior part.

In the northern part of the Mosque there are some ruins of buried structure. Some outer portion of that buried structure is seem like spherical shape. Which demands more exploration and systematic archaeological excavation to reveal the history behind this region.

The Shat Gombuj Mosque has existed for nearly for 6 centuries. It is also referred to as sixty Dome Mosque. It is one of the largest historical mosques in the Bangladesh. People in Indian subcontinent praise it for architectural beauty. Khan Jahan Ali built the Shat Gombuj Mosque. The walls are unusually thick, made from tapered brick. 77 low domes are located inside and one dome on every corner.

Many aisles serve as divisions in its interior. Most of its parts were decorated by terracotta. The structure looks like a fortress, three smaller mosques can be found near it. They are Bibi Begni’s Mosque, which is found on its western side; the Chunakhola Mosque, located half a mile northwest of Bibi Begni’s Mosque; and the Singar Mosque, which is a single-domed mosque like the Chunakhola, located nearly half a mile southeast of Shat Gombuj Mosque.

Dasbari Mosque is located close to Ompur in between Sona mosque and Kotowali Dorja. Generations of local people say it as Dasbari. It is an abandoned place now. According to an inscription in 1497 during the reign of Sultan Shamsuddin Yousuf this mosque was built.

No explanations are found regarding how this mosque was named. It is modeled after the Chamchika mosque in India. Like Dasbari this mosque is built with terracotta bricks. Its circumference is so thick that during the month of Chaitra when it is so hot outside but it remains cool inside. The main dome here looks pretty attractive. North to the mosque there is a Dighi whose volume is 60 bigha. 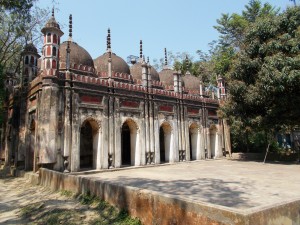 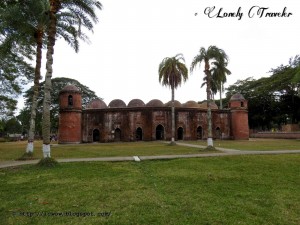 The Shat Gombuj Mosque has existed for… 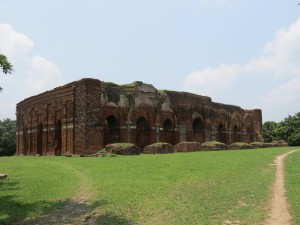