Gouri Moth (a sacred place dedicated to the culture of Krishna lifestyle) was established in 1943 in Barodia, Kalia, Narail. After a couple of renovations, it is still there to welcome the devotees of Lord Srikrishno. There are some other Gourio moths in entire Bangladesh too. The most prominent one is in Dhaka at Narinda/Wari area.

In 1943, Turyaswami established the original temple after which he put the idol of Radha-Krishno in it. In 1971, during the liberation war of Bangladesh, Pakistani Army destroyed almost everywhere temple in Bangladesh but luckily the Narail area was a base of Bangladeshi Freedom Fighters so that they did not manage to destroy the temple. However, the temple needed renovation, so another Guru (religious preacher) Santo Goswami made a reconstruction of the temple complex.

25 years ago, from Rajstan (India), a White Shiv Lingam has bought in here. Now it is a Shiv Temple too and people come to worship the lingam. It is made of White Marble which is only one of the tenth of its entire criterion in Bangladesh. To see another marble made white Shiv lingam, you need to visit the Rajshahi Barenda Museum or Khulna Divisional Museum.

Few years back, idol of new Radha-Krishno was brought into this temple as well. So, now the temple looks almost as a new structure but many people did not know that it is a historical place and also a heritage sight of Bangladesh especially for the hindu religious people. It is basically a Krishna Temple that means they worship Krishna mainly. In every year during the eve of Krishna’s Birthday (Jonmastomi) they arrange a three days program to celebrate it. About 1000 local Hindu people attends the dinner (bhog/prosad) and they sings the holy krishna songs for the entire night.

The moth is Situated at Kalia Upazila. The means it is a bit far from Narail Sadar. Easiest way to reach there is to use the Mongla highway. Otherwise, anyone can reach there from the sadar by local auto-rickshaw.

How To Reach: Narail district

Narail lacks high quality accommodation facilities and requires improvement in this sector. However, some of the places, you may consider staying in are listed below for your assistance.

If you are a Hindu devotee then you might worship the Linga. Otherwise you see the Very Large Pan to cook food of hundred people.

Referred to where to eat in Narail, click here

It is one of the places where you will see a White Shiva Linga. To see other Marble made lingam you need to go to the Rajshahi Museum or Khulna Museum.

Ram Thakur was a Hindu saint from Bengal, who had followers mostly from East Bengal; now Bangladesh and Tripura. He worked among people of various castes and faiths. He is also known as Shri Koibolyonath to his followers. He was born in the Bramhin Bidyalankar family at Dingamanik(Naria), in Shariatpur district, Bangladesh, on 2 February 1860 to father Radhamadhab Chakrabarty and mother Kamala Devi. Ram Sadhur Asram was named by Ram Thakur. It is the most favorite Hindu Structure in Shariatpur.

Vatodara Shiv Mandir (ভাটোদাড়া শিব মন্দির) is located in Dighapatia near the Dighapatia Rajbari. This temple was established near a 100 years ago, as the local says. Whereas, Vatodara Kalibari, mainly uses for worshipping in various occasions, was built recently. In various occasions like Durga Puja or Kali Puja, people from Hindu religion of this locality greatly celebrate their rituals here. Although, Vatdara Shiv Mandir remains almost dysfunctional and out of care, people of the area largely come and worship in Kalibari.

There are two Shib Mandir (শিব মন্দির) available near the village Chandrabati (চন্দ্রাবতী) that is around 6 kilometer apart from the Kishoreganj (কিশোরগঞ্জ) town. One of those are shorter in size. These temples are related with many stories of Chandrabati (চন্দ্রাবতী) and her life. It is believed that the temples were built during the 16th century, contemporary to the poet's birth.

It was around 3:00 at the afternoon when I have reached there. So I was the only traveler or tourist there that time. There are few sitting places available near the temple. Authority built those for the visitors. Probably during the holidays or at afternoon lot of visitors use to gather here. Ram Thakur was a Hindu saint from… 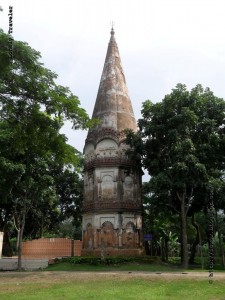