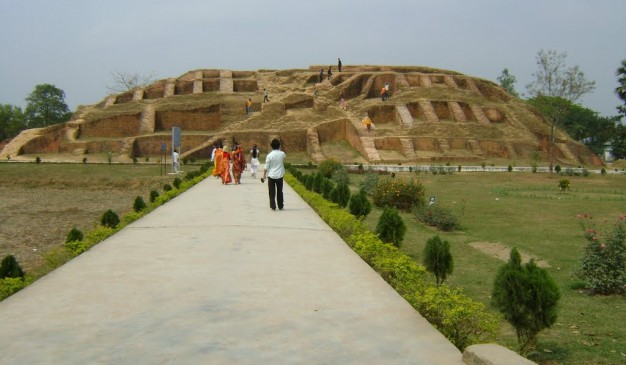 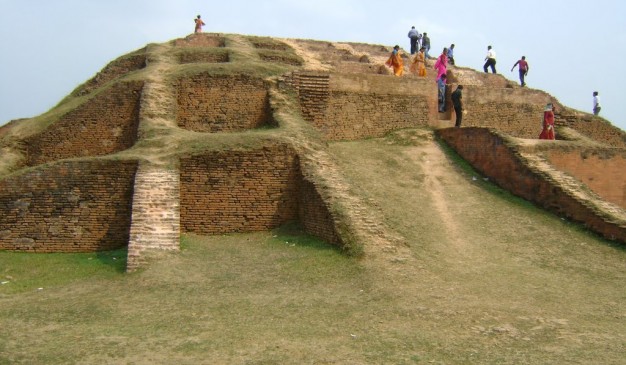 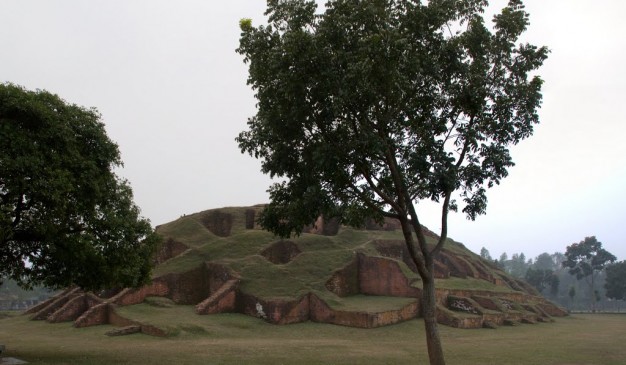 The name Lakshindarer Gokul Medh is taken from famous folk tale Laksinder and Behula. It was excavated in 1934-1936 and it exposed the antique of a temple. It has a high podium and it can hold 172 rectangular blind cell of different types. Terracotta plaques and other objects were found while digging during the Pala period (6th-7th) century.

The mound derived its name from the popular romantic folk tale entitled Behula and Lakshindar. Connected with the same story is found another smaller mound, locally known as ‘Netai Dhopanir Pat’, situated to the close east of the Medh.

The mound is situated on the west of village Gokul which is about 2km to the southwest of Mahasthangarh. It was excavated in 1934-36 and has revealed the derelict relics of a temple. The remarkable feature of this temple is its high plinth accommodating 172 rectangular blind cells of various dimensions. They rise in tiers and packed solidly with earth, so as to form a lofty massive podium, crowned originally either by a shrine or a stupa, now lost.

This novel device, functionally comparable to our modern piling system, liberally used in Bengal during five centuries preceding the Muslim conquest, was found particularly suitable for the alluvial soil of Bengal by the builders to erect their sacred buildings to an imposing height much above the flood level. However, the cellular construction is not confined to Bengal only but parallel examples occur far to the west at Ahichhatra in the Bereilly district of U.P.

Terracotta plaques and other associated objects unearthed during the excavation, which are ascribed to the late Gupta period (6th-7th century A.D.), indicate that originally this stupendous ruin at the Medh constituted an imposing terraced sub-structure of a roughly cruciform plan surmounted with a central shrine of complex outline, dedicated probably to the Buddhist Faith. Over the sub-structure is an octagonal plinth which, as mentioned, may originally have carried a stupa, but now completely gone. This stupa was replaced by a square shrine ( 8.17m square outside) and porch during the Sena period (11th-12th century A.D.).

A grand staircase on the west gave access to the shrine, but the doorway of the shrine and porch was later blocked and the floor level raised to an unknown height. The excavation inside the shrine revealed a small intrusive cell containing human skeleton-probably of an anchorite-and underlying that was found a circular brick-paved pit of 3.86m in diameter. A stone-slab of 51.2cm × 46.1cm was discovered at the center of the shrine which bore 12 shallow holes with a larger hole in the center containing a tiny gold left, about an inch square. However, nothing note worthy was discovered underneath the stone-slab.

Referred how to reach Bogra from Dhaka, click here. Lakshindarer Gokul Medh is 3km away from Mahasthangarh. So from Mahasthan a traveler can go there by taking rickshaw or cng auto rickshaw.

Observe the mountain and beautiful scenes of nature.

There are no eating facilities here. A traveler to suffice his/her hunger has to search for or restaurants or fast food shops nearby. A tourist may also carry personal food.

Array ( [0] => Array ( [name] => Tagore Lodge [post_id] => 22089 [post_link] => http://offroadbangladesh.com/places/tagore-lodge/ [thumb_link] => http://offroadbangladesh.com/wp-content/uploads/2015/10/P_20151017_112341_1_p-300x169.jpg [post_content] => In 1895, Rabindranath Tagore came to Kushtia main town to set up his business. At that time, common Hindu families tend to set up family businesses among the partnership of family members. Tagore patronized his family business and established a private company named  "Tagore and Company". At that time Millpara was the industrial and commercial area to run businesses. So he set up this duplex building as the office of his business named as Tagore Lodge. This building was elongated to the east-west. The main gateway is in the north. Iron made spiral staircase is in the west. At the beginning the business growth was significant. But later he failed to make revenue and gave up. Now this building has renovated and newly painted by both the governments of Bangladesh and India. A metal made statue of Ravindranath Tagore has been placed there. But the building opens occasionally, when people comes here with reference or guest from government official invitation can visit this lodge. ) [1] => Array ( [name] => {:en}Arpara Munshi Bari{:}{:bn}আড়পাড়া মুন্সীবাড়ি{:} [post_id] => 5967 [post_link] => http://offroadbangladesh.com/places/arpara-munshi-bari/ [thumb_link] => http://offroadbangladesh.com/wp-content/uploads/2015/03/Arpara-Munshi-Bari-Gopalganj-011-300x225.jpg [post_content] => {:en}

Arpara Munshi Bari (আড়পাড়া মুন্সীবাড়ী) is located near at Arpara (আড়পাড়া) of Gopalganj district. This is situated beside a man-made straight canal named 'Beel Route Canal'. This is mainly a two stored building and not that much older. But due to lack of care (and also the owner shifted to new place) it is a haunted house now a days.

The windows of this house are missing, doors are gone; trees have grown over this building and started covering it. You can hear lot of chirping sounds of birds; but it is actually a hideout for the bats. Thousands of bats you can see hanging upside down from the roof, and lot of them are flying randomly around and making the noise. It looked slight scary, but an amazing thing to watch.

Probably it’s around 50-60 years of old building and built by a rich family having family/surname Minshi (মুন্সী). They are still powerful, and prominent there by status and wealth. There are few other buildings available near this one and people are living there. Possibly they have shifted from here.

There is a picnic spot located at the village near Ronojitpur (রণজিতপুর). It is based on a house named Chondro Mohol. It was probably built by someone named Saiyad Amanul Huda Selim, who was a naval officer. Chondra (চন্দ্রা) is the name of his wife and the name of the house is given after her. Lot of local visitors use to come here every day. It was free once upon a time, but now a days they have put an entry fee to enter. Its 20 Taka these days. Apart from the house, the area is nicely decorated with flowers. Also it has symbolic sculptures to depict the lost culture of our Bangladesh. It has a mini zoo at one corner, and has several ponds around.

The house Chondro Mohol (চন্দ্র মহল) is surrounded by water and to reach there you have to go through an underpass that goes under the water. Inside the house, they have placed few stuffs which probably are the collected things from several part of the world (as a hobby, or during their traveling). 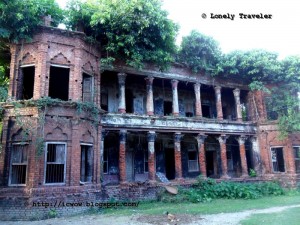 There is a picnic spot located at…