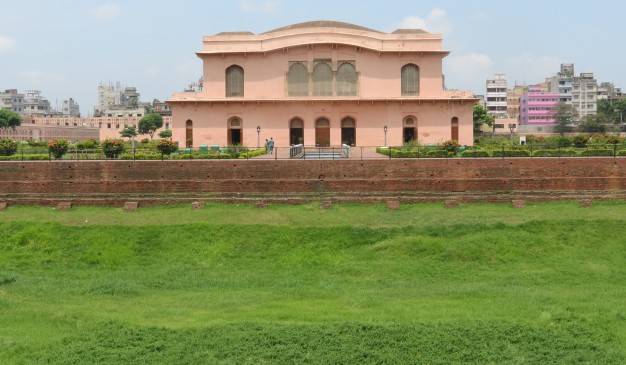 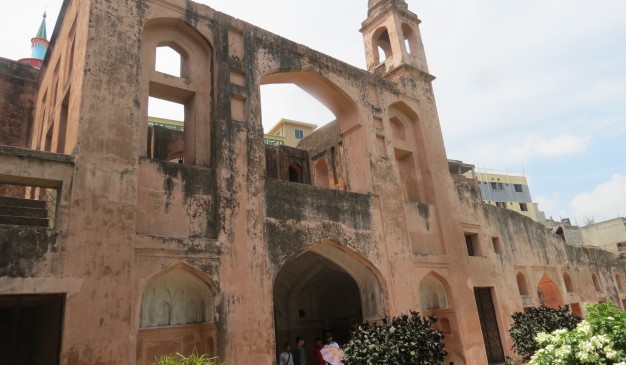 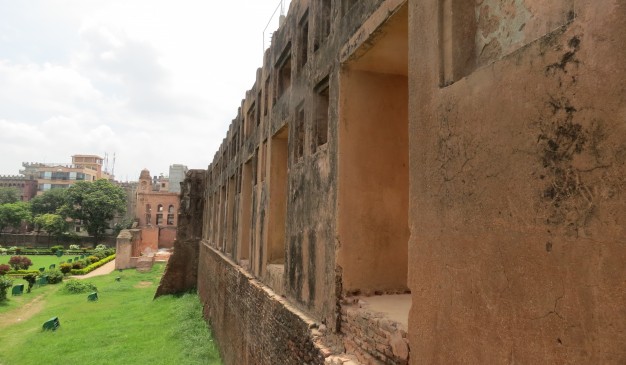 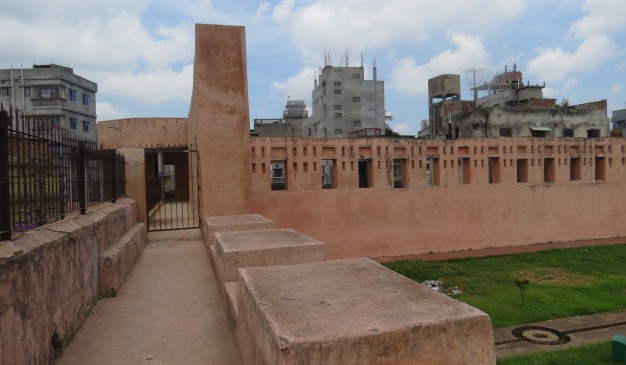 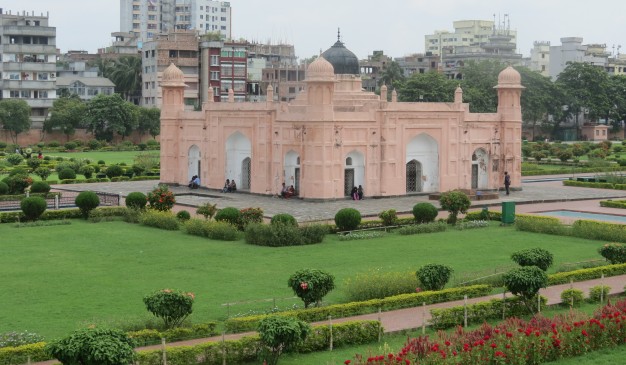 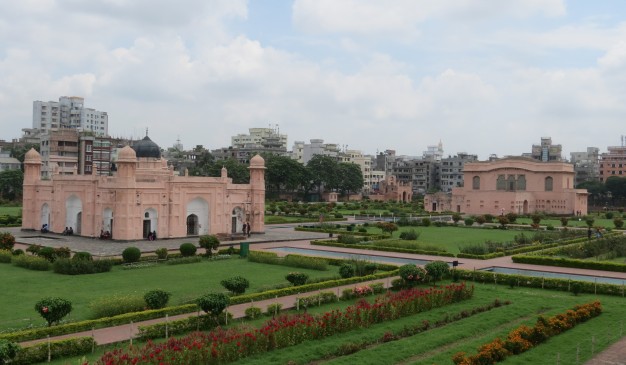 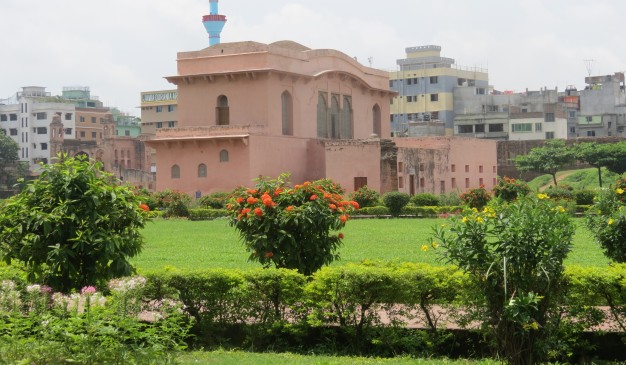 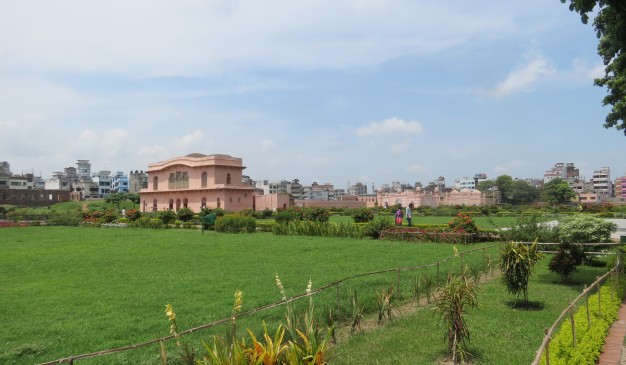 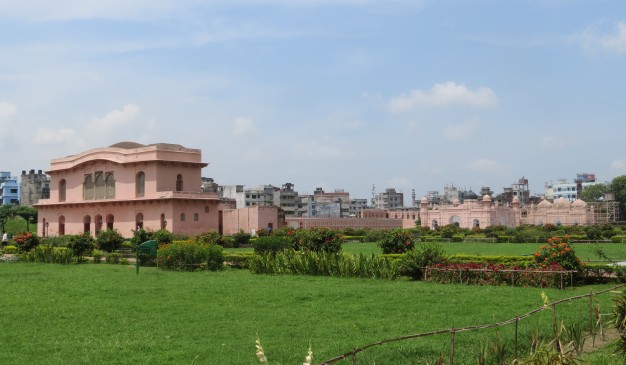 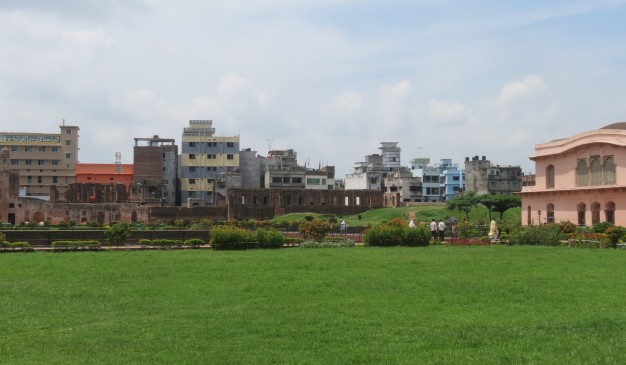 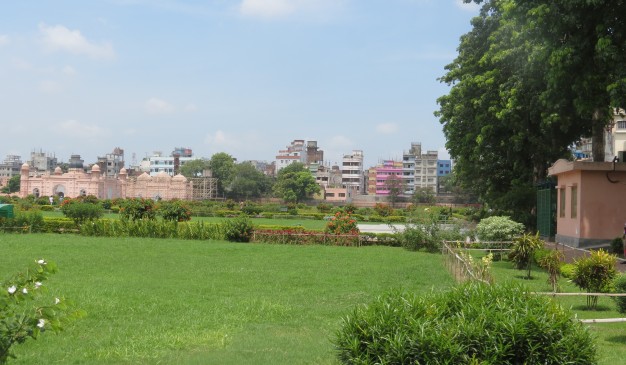 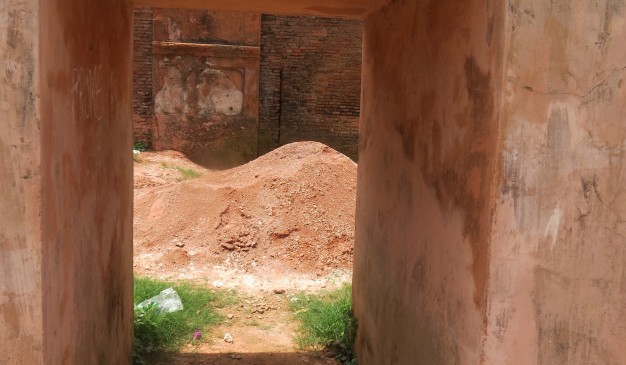 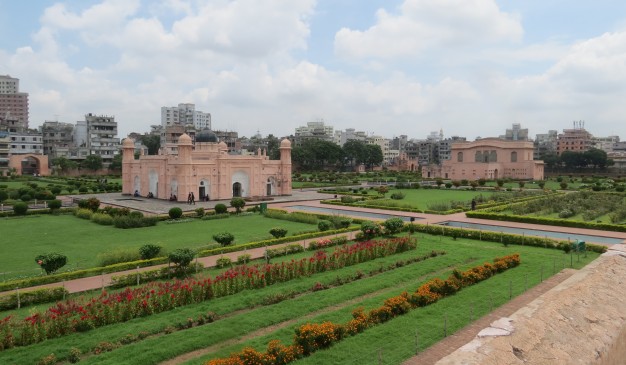 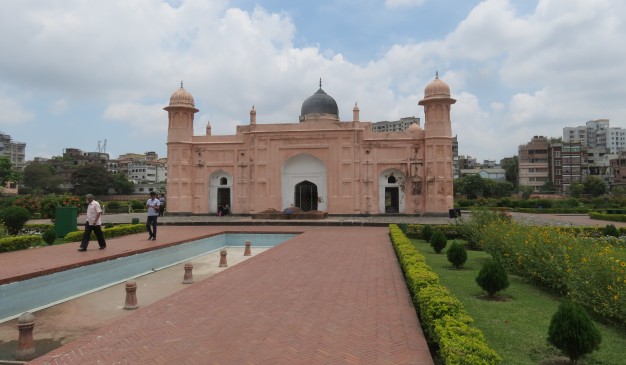 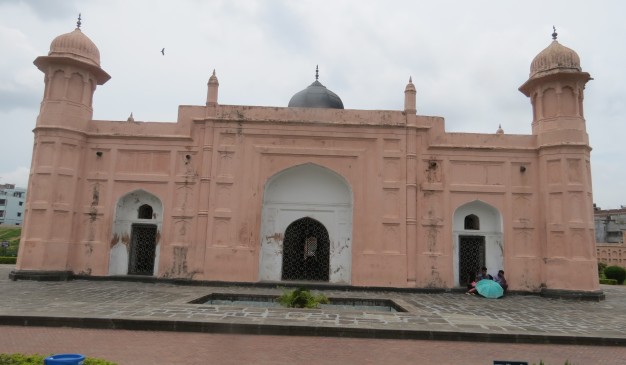 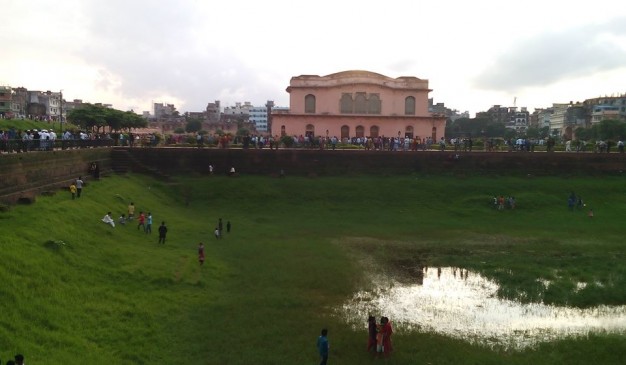 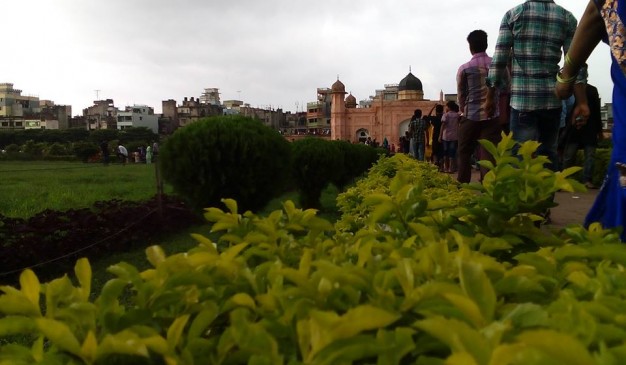 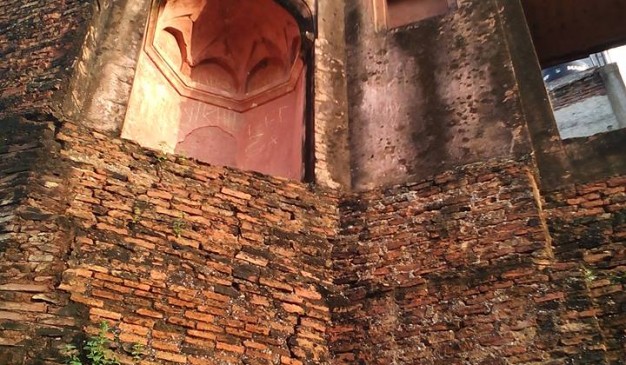 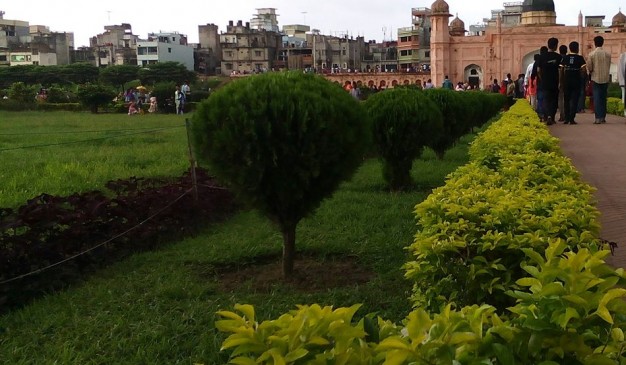 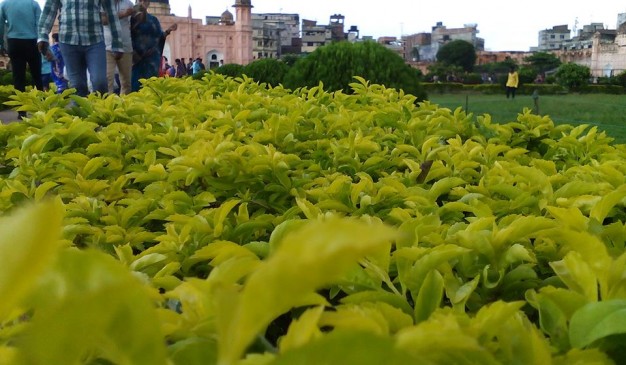 Lalbagh Fort (also Fort Aurangabad) is an incomplete 17th century Mughal fort complex that stands proudly before the Buriganga River in the southwestern part of Dhaka, Bangladesh. The construction was started in 1678 AD by Mughal Subahdar Muhammad Azam Shah who was son of Emperor Aurangzeb and later emperor himself. His successor, Shaista Khan, did not continue the work, though he stayed in Dhaka up to 1688.

Mughal prince Muhammad Azam, third son of Aurangzeb started the work of the fort in 1678 during his vice-royalty in Bengal. He stayed in Bengal for 15 months. The fort remained incomplete when he was called away by his father Aurangzeb.

Shaista Khan was the new subahdar of Dhaka in that time, and he did not complete the fort. In 1684, the daughter of Shaista Khan named Iran Dukht Pari Bibi died there. After her death, he started to think the fort as unlucky, and left the structure incomplete. Among the three major parts of Lalbagh Fort, one is the tomb of Pari Bibi.

After Shaista Khan left Dhaka, it lost its popularity. The main cause was that the capital was moved from Dhaka to Murshidabad. After the end of the royal Mughal period, the fort became abandoned. In 1844, the area acquired its name as Lalbagh replacing Aurangabad, and the fort became Lalbagh Fort.

For long the fort was considered to be a combination of three buildings (the mosque, the tomb of Bibi Pari and the Diwan-i-Aam), with two gateways and a portion of the partly damaged fortification wall. Recent excavations carried out by the Department of Archaeology of Bangladesh have revealed the existence of other structures.

The southern fortification wall has a huge bastion in the southwestern corner. On the north of the south fortification wall were the utility buildings, stable, administration block, and its western part accommodated a beautiful roof-garden with arrangements for fountains and a water reservoir. The residential part was located on the east of the west fortification wall, mainly to the south-west of the mosque.

The fortification wall on the south had five bastions at regular intervals two stories in height, and the western wall had two bastions; the biggest one is near the main southern gate. The bastions had an underground tunnel. The central area of the fort is occupied by three buildings – the Diwan-i-Aam and the hammam on its east, the Mosque on the west and the Tomb of Pari Bibi in between the two – in one line, but not at equal distance. A water channel with fountains at regular intervals connects the three buildings from east to west and north to south.

Diwani-i-Aam: Diwan-i-Aam is a two stored building. A single stored hammam is attached on its west. The hammam portion has an underground room for boiling water. A long partition wall runs along the western facade of the hammam.

A water tank: A square shaped water tank (71.63m on each side) is placed to the east of the Diwan-i-Aam. There are four corner stairs to descend into the tank.

Tomb of Bibi Pari: The tomb of Bibi Pari, the daughter of Shaista Khan, is in the middle of the complex. There is a central square room. It contains the remains of Bibi Pari covered by a false octagonal dome and wrapped by brass plate. The entire inner wall is covered with white marble. Eight rooms surround the central one. There is another small grave in the southeastern corner room.

No trip to Dhaka city is fulfilled without a trip to the Lalbagh Fort or also known as the fort of Auranagabad which was built in 1678 AD by Prince Mohammad Azam who was the Viceroy back then. The fort represents the dream of the Mughal Prince which stayed unfinished. So the whole fort has a sense of history and mystery entwined in the very bricks of the foundation. The Lalbagh fort falls under the Dhaka Division/subdivision and Lalbagh Thana.

The fort is structured in three levels with towers donning the south gate. The fort is filled with hidden passages and a massive mosque.  It also has a fortified perimeter with a number of magnificent monuments. Among the notable monuments in the fort are the tomb of Pari Bibi and the audience room and bathing room of Nawab Shaista khan which is now being used as a museum.

It is better to go there early in the morning as the light provides better viewing and a more pleasant experience due to bad lighting later in the day.

Idrakpur Fort situated at Munshiganj proper, now on the west bank of the canal running through the town, and on the eastern vicinity of Deobhog village. This water fort was originally built at a strategic point on the junction of the river Ichhamati (now dried up) and the Meghna. The location of the fort had earlier been named as Idrakpur. The development of the township in the locality with the name Munshiganj is a later innovation. Still there is a village named Idrakpur in the suburb of the town. The surroundings of the fort are now filled with earth, and in some places the silt has risen up to the level of the parapet.

The erection of the fort was intended to check the advance of the Magh and Portuguese pirates proceeding towards the Mughal capital city of Dhaka. It was probably built by the Mughal subadar Mir Jumla in about 1660 A.D.
This brick built fort, quadrangular in size, runs from north to south measuring 86.87 meter in length and 59.60 meter in breadth. It consists of two main parts: i) the wider open area surrounded by curtain walls crowned by machicolated merlons, with engaged rounded corner bastions also crowned by merlons and pierced by musketry, and ii) the smaller area containing a round drum of huge dimension surrounded by another series of similar curtain walls. An approach to the drum is provided from the bigger court.

The most striking feature of the fort is the existence of an elevated rounded platform of 32.5 diameter and 9.14 meter high on the eastern part of the fort, which can be reached by a staircase. Another striking feature of the fort is the existence of a staircase leading to an underground room at the foot of the drum. Tradition goes that the staircase is a part of the provision for an underground tunnel meant for emergency exit of its occupants to some safe destination. But virtually the staircase simply leads to a secret underground chamber which was the magazine or storehouse for arms and explosives.

The main entrance gate of the fort is on the north with a high rectangular bastion crowned by machicolated merlons which served as a guard room.

12th of May 2015, A typical day for the workers who were employed for the renovation work of this Mughal fort. As the Dept. of Archaeology decided to make a museum & a cultural center inside the fort earlier.For the last 300 years there have been several renovations conducted there. But, this time something very interesting discovered while the workers were removing floor's plaster. All on a sudden they observed there have been a significant numbers of pitchers were placed in row & Column beneath the outer surface of floor. Initially, It's presumed that these pitchers is nearly 350 years old as this fort was built in 1660 AD.

Some of the researchers from Dept. of Archaeology interpreted that these vessels were used for keeping cool inside of the fort and some are opposing this interpretation. They said further investigation needs to be conducted to find out the reason of using these vessel. These kind of feature has been discovered very first time in Bangladesh. It's a unique Medieval architectural feature. After finding these pitcher, Dept. of Archaeology decided to hold on the renovation work as it might destroy very important spatial context.

Bhitargarh Fort was formed a part of the chain of early medieval mud-forts erected mostly by the Muslim rulers at different times to defend their territory against the incursion of their northern Hindu neighbors. The territory east of the Karatoya River was for some time a part of the Ahom kingdom. In the 15th century, this area was included in the Tibeto-Barman Khen dynasty's territory and served as a sort of buffer state between Assam and the Muslim Kingdom of Bengal. 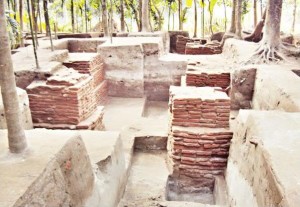 "The existence of fifteen garhs (fortifications) has hitherto been traced of which the most noted are Bhitar Garh, Hosain Garh, Mir Garh, Rajan Garh and Deven Garh. Panchagram is named after these five garhs. Amongst these fortification Bhitargarh is still vigilant archeological site. Total Garh is bounded by both manmade and natural canal and fort like wall."-Banglapedia.

Bhitargarh fort city, established in the sixth or seventh century, had a sovereign administration. Built on important trade routes, the fort city had trade links with Tibet, Bhutan, and China as well as with West Bengal, Bihar, Sikkim and Punhdrabardhan of India.

The entire fort city is bordered by two rectangular wall- inner and outer wall or fortifications. There are two villages inside the wall- Bhitargarh and Maharajar Hat, with village market (Bhitargarh bazar). Most interesting feature is the Maharajar Dighi is a large pond, the most attractive place inside the fortification. It is really beautiful during rain. Probably the Maharaja (king) of Bhitargarh, dug the canal for supplying sweet water inside the fort. The pond might be connected by drainage network.

This is known as Jungle-bari Durgo (জঙ্গলবাড়ী দুর্গ), Isha Khar Bari (ইশা খাঁর বাড়ী), etc. to the local people. There is a dilapidated building is still available there. A portion of that building is still being used by the decedents from Isha Kha (ইশা খাঁ).

An archaic mosque is available just beside the Jungle-bari (জঙ্গলবাড়ী) fort. It’s a small rectangular shaped mosque having three domes at the top and four minarets at the four corners. A large pond is available at the eastern side of the mosque.

Most of the Zamindar Bari (জমিদার বাড়ী) from Bangladesh are in a very poor condition. That time the owners were facing difficulties for religious upheaval and other adverse situations, thus they have sensed an urgency to leave this country for their own safety. But fortunately, here they are still living with pride, may be they were too much friendly with the peasants.

(We could't reveal more information about this. If you know more, Please feel free to cooperate and share with us) 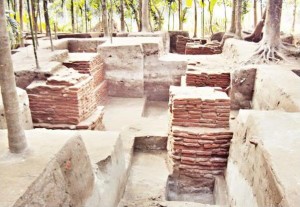 Bhitargarh Fort was formed a part of… 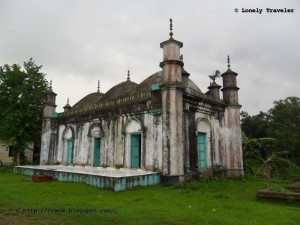