Mir Mosharraf Hossain (মীর মশাররফ হোসেন) was a famous Bengali language novelist, playwright and essayist in 19th century. He is popular among the people for his famous novel Bishad Sindhu (বিষাদ সিন্ধু). It is a novel based on the tragic death of the grandchildren of Holy Prophet Mohammad. The incidents behind “Ashura” is being well written in here. He is considered as the first novelist to emerge from the Muslim society of Bengal. He was born and brought up at Lahinipara in Kushtia District.

Though he was born in the village of Lahinipara (লাহিনিপাড়া) in Kumarkhali (কুমারখালী), Kushtia in 1847, but after that he spent most of his life in Padamdi in Baliakandi Upazila under Rajbari District. He was born in a Muslim aristocrat family.

The original house at Kumarkhali being demolished almost 130 years ago. In the year 2008, government established an auditorium in that place along with a primary school.

That place is used as a museum too, which is named as Mir Mosharrof Hossain Memorial Museum. Inside the Museum, visitors may not discover a significant number of collections. But, a few collections will make the visitor remember the lifestyle of this great novelist. There are only some agricultural tools, chairs, glasses and some armors used by Mir Mosharraf Hossain is being displayed for the visitors. There are some rare and historical photographs too.

Mir Mosharraf Hossain died in 1912 in Padamdi. In 1999, Government of People’s Republic of Bangladesh decided to build a memorial complex in his family graveyard in Padamdi, Rajbari. Which make the traveler confused as two of these structures are almost in similar pattern concentrating on the memories. But a traveler has to keep in mind that one is in Kushtia and another one is in Rajbari.

From “Chourhash” you need to take a local Auto / CNG heading to Kumarkhali.
Drop down at the place called “bridge” where Mir Mosharraf Hossain bridge starts.
Then you will find road sign directed to the memorial complex.

How To Reach: Kushtia District

You can travel to Kushtia from Dhaka by bus. Some of the bus services have been listed below for your assistance:

There are some hotels in the district where you may consider staying in. Some of them have been listed below for your assistance:

You may enjoy the exhibition inside the Museum and several adjacent features along with that.

Lalon Bus stand is just five minutes away from the Museum’s place. You may find hotels and restaurant at Lalon Bus Stand very near to Lahinipara, Kumarkhali.

This Place remains closed on Sundays.

Mymensingh Museum (ময়মনসিংহ জাদুঘর), formerly known as Momenshahi Museum (মোমেনশাহী জাদুঘর) is located at the bagan bari (garden house) of Zamindar Madan Babu at 17 Amrita (অমৃত) Babu Road, Mymensingh, Bangladesh. The museum, which began as an important regional institution for preservation of locally collected historical evidence, lacks proper preservation. Its objective is to preserve the rare and unique relics of local architecture, sculpture, metal works,utensils, handwritten scripts on paper and leaf, and commercial products. Collected from the palaces of Mymensingh District Zamindars, the museum's initial collection included 214 articles. They are housed in three rooms within the museum.

The museum was established in 1969 at the initiative of the-then Deputy Commissioner of Mymensingh. Initially run by the Mymensingh Municipality. The Department of Archaeology, Cultural Affairs Ministry took charge of the museum in 1989. By 1995, it was enlisted in the gazette. The collection includes manuscripts and coins, though many are not on display due to insufficient showcase space. A peacock mummy comes from Mymensingh Medical College. Bamboo and cane items, preserved birds, photographs and pottery were damaged during a renovation in 1999–2001.

Natural history items include a tiger head, two deer heads, and the head of a wild bull. Elephant heads, a sofa set, Italian statues, and a huge shade used during hunting come from the Gouripur(গৌরীপুর) zamindar palace. A rhinoceros hide and a table with a marble stone top were acquired from the Atharabari (আঠারোবাড়ি) zamindar palace .The museum contains many paintings of rural Bengal.

It was the parental Zamidari house of Rabindranath Tagore. It contains belongings of the famous poet such as dishes, bathtubs, hookahs, piano, sofa, metal vessels etc. The musical instruments present there such as piano are damaged and not used now. It is now used as a museum. It is frequently visited by many. There is lack of space and no parking facilities. There are a lot of cracks in the building which might be a source of concern for the tourists.

Shajadpur Rabindra Kachari Bari is a two-storied building situated in Shahjadpur of Sirajgonj district. The building itself is historic structure due to its relation with Novel levrest Rabindra Nath Tagore. A number of objects belonging to Tagor's personal life are now on its display. After the liberation war in 1971, a complete military… 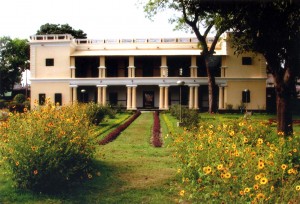 It was the parental Zamidari house of…