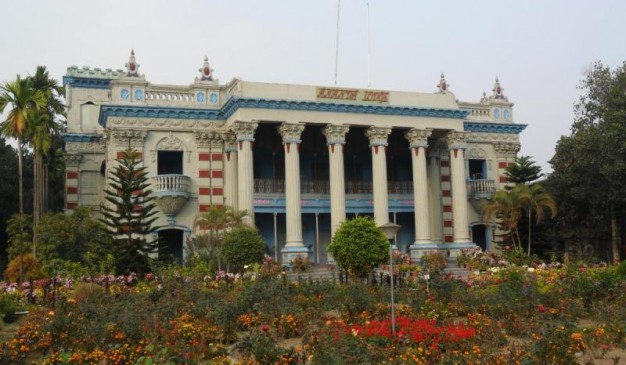 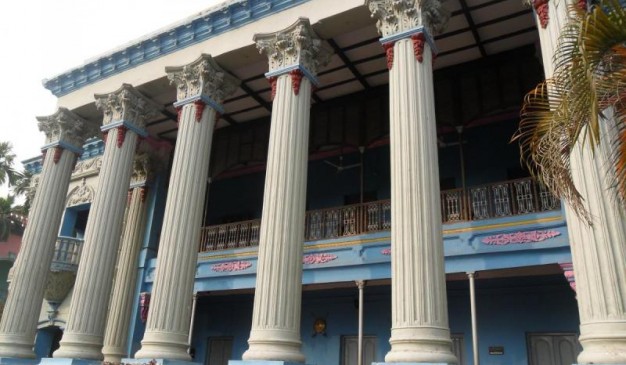 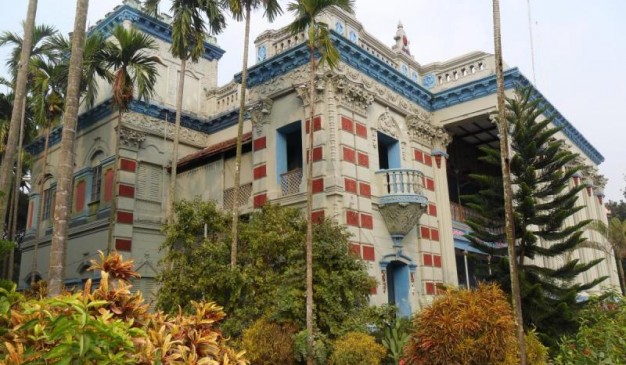 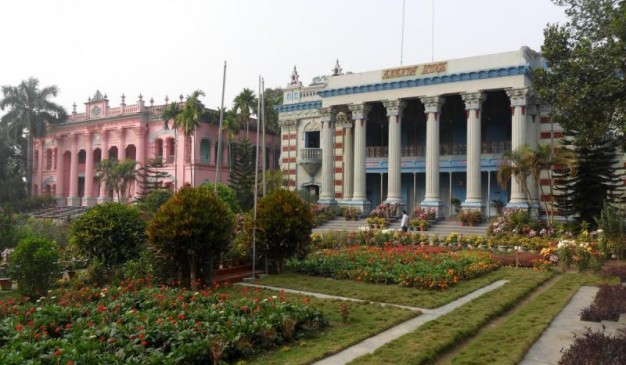 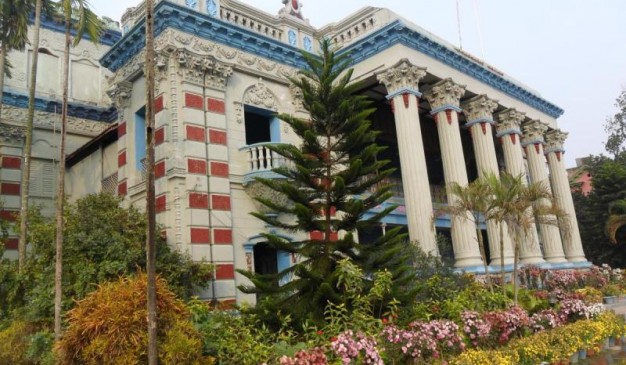 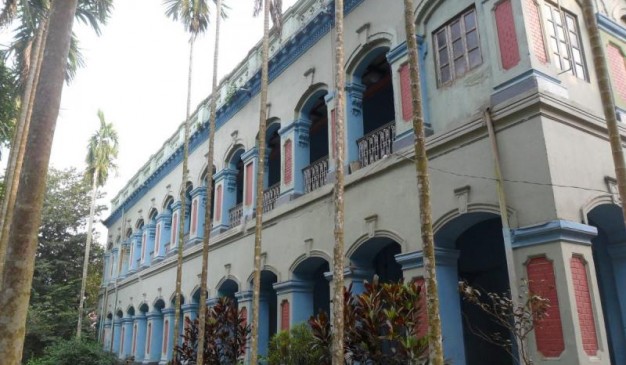 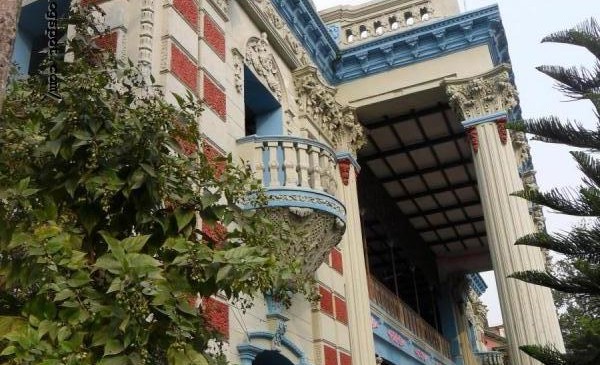 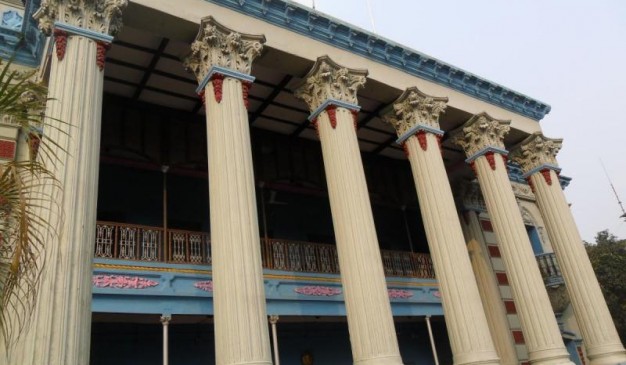 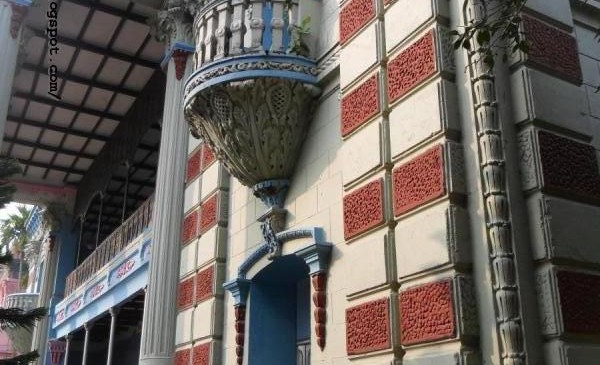 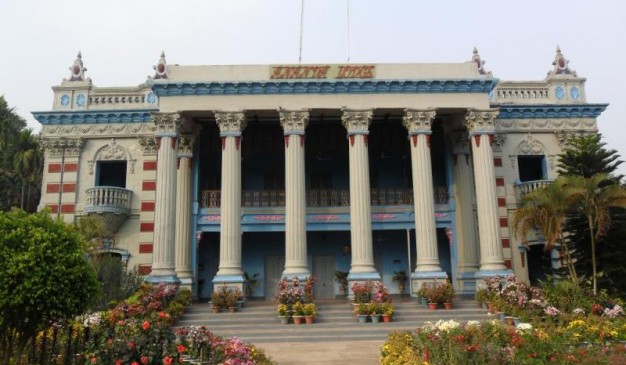 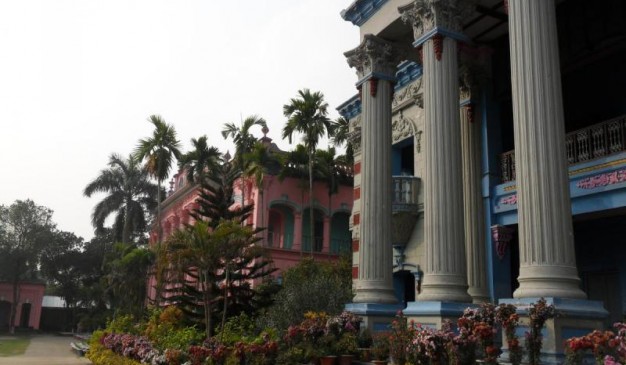 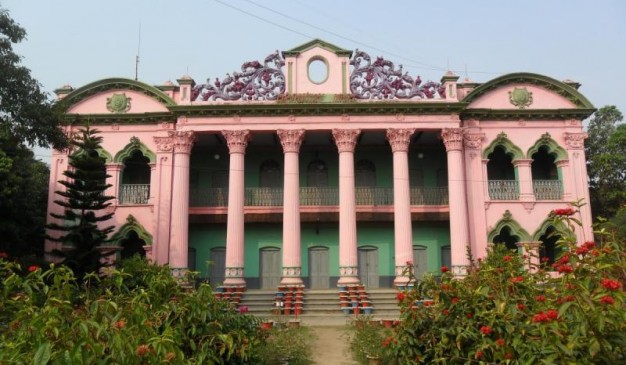 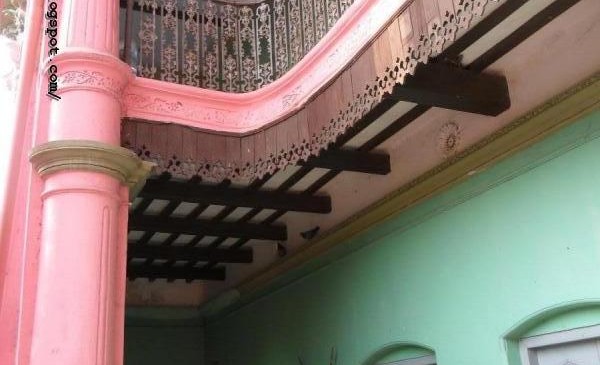 It is not sure but people believed that they have started their Zamindari somewhere around 1890. First Zamindar (জমিদার) was Kalichoron Shaha (কালিচরণ সাহা). Beside their Land Lordship, they have conducted trading related to Jute and Salt. They were the owner of huge land properties from different part of Bangladesh. During country division and war, most of them moved into India. Only very few are living at Tangail. Their attractive edifices are now become a tourist spot. Since they were rich, people says they have built those building before establishing their Zamindari (জমিদারী). Mohera Zamindar Bari has several main buildings. Each of those are presented below with short description.

Chowdhury Lodge (চৌধুরী লজ): After entering the Zamindar mansion premise through the main gate, Choudhury Lodge is the first building that you’ll find. It’s a pink colored building having Roman/Greek styled pillars at the front side. The rich ornate building is having corrugated at the roof from inside.

Its a two stored building having a garden in front of it. This building is beautiful from the back side too. There is a playground for the kids available there.

Moharaj Lodge (মহারাজ লজ): This is a pink colored building having byzantine design. Similar to other buildings it has 6 columns at the front side. The stair in front of the building has a curved railing which just increased its beauty.

Similar to other buildings it is a two storied building having a garden at front. Behind the garden has a tennis court. The Moharaj Lodge and the Ananda Lodge are adjoining.

Kalichoron Lodge (কালিচরণ লজ): This building is built during the last portion of the Jomidari Era. Thats why this one is looking different than other three. It is having more rooms compare to any others from the premise.
Architecture of the building is somewhat similar to the colonial era buildings. The shape of the building is like the letter ‘U’ in English alphabet. During the noon-afternoon, you’ll find a play of light and shadow for that shape from the inside of the building.

1) A bus from Mohakhali(মহাখালী) terminal of Dhaka will take you near to the Jomidar Palace. Best available bus services are Dhaleswari(ধলেশ্বরী) Service, Jhotika(ঝটিকা) Service, etc. These are direct bus for Tangail(টাঙ্গাইল). Ask the bus to drop you at Natia Para(নাটিয়া পারা). This stoppage is just after the Pakulla of Mirzapur(পাকুল্লা, মির্জাপুর). GPS coordinate of Natia Para(নাটিয়া পারা) is (24°10’24.32″N, 90° 1’1.49″E)

There is a canteen available at Mohera Police Training Center. So you shouldn’t be worried about the lunch there.

This Jomidar palace is currently undertaken by the Police and they have established a training center there. But they allow visitors to visit the Palace for a 20 Taka ticket per person.

Haturia is the birth place of Zamindar Sekander Ali Chowdhury who was the Recognized Muslim Zamindar in British Period. Haturia is the place in Gosairhat Upazila where once upon a time, there was Stimar Station. The old structure of Haturia Zamindar Bari is now destroyed for lack of caring. If Government or any other not care it or take any steps, it will be distinct as soon as possible.

At the Western side of the building, there is a large pond and beside the pond a temple is located named as Noborotno Temple (নবরত্ন মন্দির). The temple is a four storied building having a glorious example of classical architecture.

The whole palace is situated just beside the bank of mighty river Jamuna. After a few miles from the palace premise, the river merged with another big river, Padma. The palace is a two storied building and from the roof you can easily see the Jamuna river.

This palace is the birth place of Promila Debi (প্রমীলা দেবী), the wife of our national poet Kazi Nazrul Islam (নজরুল ইসলাম). Poet first saw her in this palace when he came here to visit Promila's cousin-Dhiren Sen (ধীরেন সেন).

Uttara Gonobhaban, often called Dighapatia Raj (sometimes called Dighapatia Raj Paribar literally Dighapatia Royal Family) was a zamindari in present day Rajshahi, which was ruled by this dynasty of 7 generations of Rajas from late 17th century till the mid-20th century; when the democratic government took power after the end of the British Monarchy’s rule in India, in 1950, the East Pakistan government abolished aristocracies and the zamindari system in present day Bangladesh. The family was seated at the Dighapatia Palace.

The family contributed largely to the development in education, infrastructure and culture of Rajshahi and North Bengal. They were especially famous for their generosity and public spirit. The Rajas built the Varendra Research Museum among other institutions of culture and education. The Rajas of Dighapatia were seated at the Dighapatia Palace. They received royal titles and titles of honor from the Mughal Empire such as Raja, Maharaja and Raja Bahadur and other titles from the British Crown, such as the Indian Orders of Knighthood.

It is also known as Maharajas palace. Raja of Dighpatia built it but it is used as residence for head of states in North Bengal. During regime of British Raj, East Pakistan many meetings took place. There is a marble front of late Raja Pramathanath Roy of Dighapatia.

The first Raja was Dayaram Roy who, at a very young age, received the help from Raja Ramjivan Roy, the first Raja of the Natore Raj family, and eventually became his dewan. Raja Dayaram led the army of Raja Ramjivan in aid of the Nawab of Bengal in 1716 and overthrew the rebellious Raja Sitaram Ray, who was a zamindar(and later king, or Raja) of neighboring Bhusna state. The sack of Muhammadpur, Raja Sitaram's capital, later enabled him to ultimately lay the foundation of the Dighapatia dynasty. For his loyalty, he received large tracts of land in Rajshahi and Jessore as grants and later acquired zamindari in Bogra and Mymensingh.

Nawab Murshid Quli Khan, who was the nawab of Bengal under Emperor Aurangzeb conferred on him the title of 'Rai-Raiyan' in recognition of his services. When the Earl Cornwallis introduced the Permanent Settlement Act, a large number of the old feudal lords and zamindars created during the time of the Nawab Murshid Quli Khan could not meet land revenue standards and thus became defaulters. Their estates were sold up to a new class of wealthy lords. The Dighapatia Raj was one of the few remnants of the old decaying 'jagirdars'. They were avidly following European dress, wine, horse race and various such other external glamour of life. The princely western influence is reflected not only in their palace architecture but also in their furniture and other interior decorations. However, during certain ceremonial occasions they donned extravagant robes, jeweled turbans and carried priceless inlaid swords in dainty scabbard tucked at their waists, following the bygone fashions of the Mughal nobility even when the Mughal dynasty and their imperial rule had faded. Pran Nath Roy and Pramada Nath Roy were some of the important zamindars of Dighapatia. 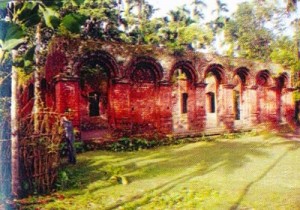 Haturia is the birth place of Zamindar… 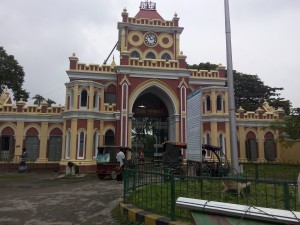