Mymensingh Museum (ময়মনসিংহ জাদুঘর), formerly known as Momenshahi Museum (মোমেনশাহী জাদুঘর) is located at the bagan bari (garden house) of Zamindar Madan Babu at 17 Amrita (অমৃত) Babu Road, Mymensingh, Bangladesh. The museum, which began as an important regional institution for preservation of locally collected historical evidence, lacks proper preservation. Its objective is to preserve the rare and unique relics of local architecture, sculpture, metal works,utensils, handwritten scripts on paper and leaf, and commercial products. Collected from the palaces of Mymensingh District Zamindars, the museum’s initial collection included 214 articles. They are housed in three rooms within the museum.

The museum was established in 1969 at the initiative of the-then Deputy Commissioner of Mymensingh. Initially run by the Mymensingh Municipality. The Department of Archaeology, Cultural Affairs Ministry took charge of the museum in 1989. By 1995, it was enlisted in the gazette.
The collection includes manuscripts and coins, though many are not on display due to insufficient showcase space. A peacock mummy comes from Mymensingh Medical College. Bamboo and cane items, preserved birds, photographs and pottery were damaged during a renovation in 1999–2001.

Natural history items include a tiger head, two deer heads, and the head of a wild bull. Elephant heads, a sofa set, Italian statues, and a huge shade used during hunting come from the Gouripur(গৌরীপুর) zamindar palace. A rhinoceros hide and a table with a marble stone top were acquired from the Atharabari (আঠারোবাড়ি) zamindar palace .The museum contains many paintings of rural Bengal.

This Museum is located at the main city, also near to the great river Brahmaputra(ব্রহ্মপুত্র নদ). Any visitor staying in the town can easily visit this area by having a walk or using a rickshaw. It is also easily reachable from Kachari area of Mymensingh city and nearby municipal building.

It’s not a very large museum. So if a traveler could spend around one hour for visiting this museum then he/she might enjoy the whole view of every single gallery and exhibition.

There are so many hotels and restaurants available in Mymensingh town. You may choose one of those.

Mahatma Karamchand Gandhi, the father of India, was the pioneer of the liberation movement of India from the British Empire. He visited Noakhali in 1946 and the place he lived is now turned into a memorial complex situated 25 kilometers away from the Noakhali District.

The very brief history of India: In 1946, just before the liberation of Pakistan from India, there were some social anarchy began in the undivided India. At that time, he decided to visit different places where the massacre started. According to his plan, he visited Noakhali and gave a peace speech. Gandhi was interested to set up a technical training institute at "Joyag" area for the rural uneducated people because he believed that only education can change the mind of a man and keep themselves away from being involved in crimes like killing/looting etc. At that time, a local lawyer, named Hemanta Kumar invited him to stay at his home. Hemanta was believed as the first barrister in this region on that time. He donated his land and building to Gandhiji and Gandhiji was pleased to him too. Gandhi used to drink only goat milk and he always carried a goat with his team. One night, the goat of Gandhi was stolen from the complex. After that he returned to Bihar (India) but willing to come again to continue the activities of the vocational training center. After that, Pakistan got independence from India. In 1948, Mahatma Gandhi was assassinated by fire and never managed to came back to Noakhali before his death. That was his only visit. In 1971, the east part of Pakistan declared themselves independent and named Bangladesh. Noakhali belongs to Bangladesh now. The Institute is now running autonomously in collaboration with the Bangladesh government.

Current Condition of Gandhi Ashram Trust: After his death, the Pakistani government tried to destroy his memories and work. The Pakistanis always hated Gandhi and all the Hindu people. During the period of 1947-1971, Pakistani people and their supporters forced Hindus to settle in India and destroyed their properties. After 1971, the Independent country Bangladesh began to preserve his history. The Vocational instituted was then named "Gandhi Ashram Trust" and started to serve local rural people. But now after 2000, the training activities started to decline. People are much more interested to move towards to a city now. Now the building is converted into a museum where lots of photos of Gandhi's earlier life is found.

The Ashram Trust is located in Joyag, Sonaimuri, Noakhali district. It is actually situated at Noakhali - Ramganj (Laksmipur) highway. There are some other branches of Gandhi Ashram are established to achieve the mission of Mahatma Gandhi in many different districts of Bangladesh. But actually the historical place where Gandhi resided in Bangladesh is in Noakhali.

Hason Raja Museum is a folk museum located in Zindabazar which is a focal point of Sylhet main town. The house of the famous mystic poet Hason Raja is now the Museum of Rajas. It aims to preserve the history of rich Raja family and keep Hason Raja in center of attention. It inspires research on folk culture and history.

It is maintained and organized by the Educationist Dewan Talibur Raja Trust, named after the grandson of Dewan Hason Raja. The museum's mission is to preserve and share the rich history of the great Raja Family of Sylhet keeping the Zamindar and Mystic poet Dewan Hason Raja Chowdhury (1854–1922) in the center, and the folk literature, folk music and mystic poets of Sylhet Division. The museum promotes a greater public awareness of the rich cultural legacy of Sylhet. In pursuit of these goals, this museum collects archival materials related to Bangla folk literature, music and poets from the greater Sylhet region, and preserves these collections in a repository, open to the public.

The museum also encourages and facilitates research on folk literature and history. The results of this research are made available to the public through museum exhibits, publications and presentations. It was formally inaugurated on 30 June 2006 by thousands of folk loving people by playing "Ek Tara" (a folk musical instrument) together, which was a unique event of this kind.

In 2001, after receiving a fund from the UNESCO, a museum has built by the government at Bagerhat in the UNESCO world heritage site "Shat Gombuj Mosque" complex. It is now being used as a learning center to let people aware about the ancient city named Khalifatabad established by Khan Jahan Ali which is known as Bagerhat today.

It is a one storied building. It has two large galleries to display antiques. Antiques found in Bagerhat are categorized into two parts. One of them are the earthen materials and another is wooden and slate (rock/stone). There is a photo gallery too to display the rare photos of artifacts and ruined architectural structures.

The building is built later but the designers made it with a beauty of ancient structure visibly similar with the mosque because of the dome so that the museum does not look odd in the complex. During the summer time, it is opened from 9 am to 6 pm for the visitors. The entry fee for the complex is 20 taka for Bangladeshi citizens and it is also the ticket of the museum, there is no separate ticket is needed.

The latest collection of this museum is the skin of the alligator (named Kalapahar) of Khan Jahan Ali. After its death, the skin is preserved and being displayed at the museum.

In Khulna, there is a memorial complex by the name of Rabindranath Tagore. It was his ancestors place in Bangladesh. At that time they were known as "Kushari" instead of Tagore. By and by, the family name became Thakur. However, some descendant of the bloodline still lives here and grow their own business.

A descendant of the Kushari Family went near Kolkata (India) to spread his business. At that time in that place he was the only person from the “Brahman” class. That means his family members can do Hindu rituals. During that period, the Brahman class was called “Thakur” by the general people. In course of time, Thakur became their family title.

In that bloodline, the famous noble laurite Rabindranath Tagore was born. On the other hand, the root bloodline of Kushari family remain living in the greater Khulna area.

It is believed that, Five person came to spread Hinduism in the particular part of Khulna. Their descendants lately became the ruler of “Kush” village and the word Kushari became their family name.

After the demolition of the old house, the government of the people’s republic of Bangladesh established a one storied memorial complex in 2007 at Pithavoge where a bust of Tagore is established. There are a lot of photos of historical moments of Rabindranath Tagore to display. The unique thing is, Rabindranath drew a few artworks which are also displayed in here. The most mentionable is the self portrait of Rabindranath Tagore drew by himself. 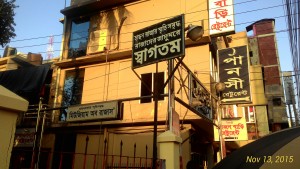