Panam Nagar (পানাম নগর), ancient Painam, a locality now in Sonargaon upazila of Narayanganj district. It is about 2.5 kilometre to the north of Dhaka-Chittagong highway at Mograpara point. It is said to have been the site of Hindu capital city of Sonargaon emerging in the seventh decade of the thirteenth century. The Panam area formed part of the Muslim metropolis developed on the south of the old city, and perhaps constituted the place of residence of the early Muslim governors’. After the Mughal conquest of Sonargaon (1611) the Panam area was connected with the ruling metropolis by construction of highways and bridges. Panam still possesses three brick bridges belonging to the Mughal period: Panam Bridge, Dalalpur Bridge and Panamnagar Bridge.

The existence of these bridges, and the canals enclosing the site on three sides is indicative of its being a suburban area of the medieval city. The pucca road which leads from the Mograpara crossing on the Dhaka-Chittagong highway in the direction of Panam extending up to the Neel-Kuthi looks like a dividing line between medieval Sonargaon and the present Panamnagar, the only surviving relics of the Panam area. The Panam township stands on the east of this road opposite Aminpur, and a one-arched humped bridge leads from the same road over a narrow canal to the main street of Panamnagar.

In all probability the present Panamnagar grew as a by-product of the commercial activities of the english east india company and of the Permanent Settlement. The East India Company established their factory in Panam for the purchase of muslin and other cotton fabrics. The Company, for the purchase of muslin, used to distribute annually to the weavers from their factory in Panam as much as a lakh of rupees as dadni (dadni system advance), and it is estimated that there were then 1400 families of Hindu and Muslim weavers in and around Panam.

Sonargaon developed into a center of trade in cotton fabrics, chiefly English piece goods, during the colonial period, and thereby grew the new township of Panamnagar. A group of Hindu talukdars, who came into being from among the traders in the nineteenth century, chose this site for their residence. The existing brick buildings of Panamnagar, obviously the residence of the Hindu merchant-talukdars, can be dated back to early nineteenth, and the later ones to late nineteenth and early twentieth centuries. Panamnagar which developed in the nineteenth century, continued to flourish till the end of the Second World War.

Panamnagar, a unique township, stretched in a single street 5 meter wide on the average and 600 meter in length. All the buildings have the character of urban street front houses and are lined up on either side of this street which ends up at the Panam bazar. Fifty-two houses exist in dilapidated and disused condition having 31 in the north side of the street and 21 on the south. Panamnagar appears to be well protected by artificial canals all around. Two fairly wide canals run parallel to the street on its either side and joined by a narrow canal on the western side over which is the entrance bridge (Panamnagar Bridge). On the eastern side, the canal on the south swerves rightward and goes eastward crossing the north-south road that passes through the Panam bazar. The northern canal, the Pankhiraj Khal, runs eastward to meet the Meghna-Menikhali stream.

You can rich that place using bus from Dhaka (Gulistan). This will take you around 1 hour to reach at the place. You have to get down from the bus at Mograpara Crossing. From the crossing, you have to take a rickshaw, and have to tell the puller to drop you at Panam Nagar. This will require around 20 taka for the lift.

How To Reach: Sonargaon Upazila

Frequent bus services to Sonargaon operate from Gulistan, Saidabad and other bus stands in Dhaka. Tickets may be bought on roadside counters. The price of the ticket from Gulistan bus stand is around 35 BDT, and the ride may take about 40 minutes, depending on the unpredictable traffic. Mention your destination as Mograpara. You can reach that place using bus from Dhaka (Gulistan). This will take you around 1 hour to reach at the place. You have to get down from the bus at Mograpara Crossing.From the crossing, you have to take a rickshaw, and have to tell the puller to drop you at Sonargaon. This will require 20 taka for the lift.

There are several Buses moving towards Sonargaon from Dhaka. Some of those are mentioned below-
1.Sonargaon Express
Departing from Gulistan
2.Borak Paribohon

We would like to suggest you to start walking from the western part of the panam city, and then move forward to eastern side until you reach to the end of the city. This is a very short path. So you can move slowly by watching the old building structures.

Rabindranath Complex, house of Bishwa kabi (poet of the universe) Rabindranath Tagore, established at Fultala Upazila under Khulna district. The name of his wife was Mrinalini.

Shoshi Lodge (শশী লজ) is located at the center of Mymensingh city which is also known as the Residential Palace of  Moharaja Shoshi Kanto Acharya (মহারাজা শশীকান্ত আচার্য). This palace is very close to the river Brahmaputra which is being used as Women Teachers Training College from the year 1952.

According to the history, most of the rulers from Zamindar family have adopted babies in different era and those adopted child ruled the area later. For example Gourikanta(গৌরীকান্ত) was adopted by Roghunondon(রঘুনন্দন). Son of Gourikanta was Shashikanta(শশীকান্ত) and his wife adopted Surjokanta (সূর্য্যকান্ত) as she was childless. Later, Surjokanto became the prominent Zamindar of Mymensingh district. People used to call him as Moharaja(মহারাজা).

Moharaja Surjokanto Acharya was the Zamindar in Mymensingh region for long 41 years. During the reign of his Zamindari he did so many work for social welfare and made a remarkable change in infrastructural development.

He started to build an unique two storied building on an area of nine acre at the end of nineteenth century. Childless Zamindar Surjokanto named after this building in the name of his adopted son Shoshi Kanto Acharya. After completion of construction this building was extensively damaged by a destructive earth quake on the year 1897. Zamindar Surjokanto was immensely worried at this great loss.

Later Zamindar Shoshi Kanto Acharya re-built this building with many additional features in the year 1905 and did more renovation work in 1911. This unique classical architecture and its surrounding will certainly attract a traveler to explore this place recurrently.

Bangladesh Parliament or 'House of the Nation' or 'Jatiyo Shangsad' is located in capital Dhaka with area of 208 acres. It was designed by Louis Isadore Kahn and made of concrete and marble showing a rich blend of ancient and modern architecture. Use of different geometrical shape and floating outlook are some different attractions of this glorious creation. You can visit only surroundings and lakes of the Parliament as it is not open for all.

Parliament of Bangladesh is a unicameral legislature consisting of 350 members of which 300 Members from 300 territorial constituencies that is one from each constituency, on the basis of adult Franchise. The remaining 50 seats are reserved for women who are elected by the aforesaid elected Members in accordance with law on the basis of procedure of proportional representation in the Parliament through Single Transferable Vote. This provision for 50 reserved women seats will continue for ten years from the beginning of the 9th Parliament.

As per provision of clause (3) of article 72 of the Constitution, the term of a Parliament is five years. It is ordinarily dissolved on completion of five years from the date of its first meeting after the general elections. The President has the authority to dissolve the Parliament earlier, if at any time he is satisfied that there is no Members of Parliament. The term of Parliament can be extended beyond 5 years by an Act of Parliament by not more than one year at a time when the Republic is engaged in war. 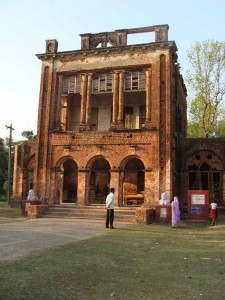 Rabindranath Complex, house of Bishwa kabi (poet of the… 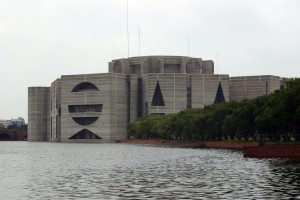 Bangladesh Parliament or ‘House of the Nation’ or…