Bangladesh is a land of beauty, and it is blessed with boundless natural wonders. Pukur Para Jhorna or Waterfall is just one such wonder. This country has several waterfalls scattered all around. The waterfall is located in the Bilaichhori Thana of Rangamati district. To reach the waterfall, you need to use the trekking routes from Bandarban. FYI, it is just few hundred meter from the Bandarban district’s border.

This waterfall is currently the widest waterfall from Bangladesh. It has a width of approximately 80 meters and a height of 4-6 feet on an average. During the rainy season, you will not be able to see any stones from the waterfall. The only thing visible is the cascade of water, fresh and beautiful. Some people call this place the “Niagara of Bangladesh”. If you walk alongside the stream, it takes around 40-50 minutes to reach at the bottom of the waterfall stream. Except during the rainy season, the path is in good condition, but during rainy season, it is advised to not walk that road as the slippery path is a serious life risk.

Trekkers used to create a make-shift shelter at Pukur Para village and only visits the waterfall for a few hours. But if you make your trip a bit wisely, you can set few tents around the waterfall during summer or winter for nighttime camp out. There are numerous dry and clean places around the waterfall for your camping.  Just imagine sleeping beside a waterfall at night; the sound of the rushing water,  a full moon & a sky full of stars away from all the hustle and bustle of the city, absolute bliss.

It is very easy village path for trekking and having lot of trees at both sides for the shades. It is around half an hour of walking to reach near a water dam named Shohosro Dhara (সহস্র ধারা) Irrigation Project. It uses to barrier the water from the waterfall.

The waterfall was very near from the irrigation project dam. You may not find the path to visit the top of the waterfall. You may find a view of another waterfall from that road and according to the local people, it may be very tough to access.

It is basically a tall but slim waterfall having very less amount of water during any season. It use to have water in a large amount (but not violent) only during the rainy days. As soon as the rain is gone, the waterfall starts to get less flow of water.

Himchhari Natural Park is just around 5 kilometers apart from the main town. You can reach at that place by any kind of vehicles. To enter the area, you'll need to buy tickets. Which is around 20 taka. There is only two place that you can enjoy at the park, one is the falls, and another one is the top of the hill.

Rijuk Waterfall (Rijuk Jhorna) is located at Ruma Upazila of Bandarban District. The water continuously falls onto the Sangu river from about 300 feet high hill, with beautiful sound throughout the year. This water is shiny like pearl particles in the space creating a unique beauty of nature. This lake is surrounded by many kinds of plant and under wood. You can go there any time but during the rainy season the most attractive views of this fall can be seen. This awesome place will make you the most naturalistic and very close to your heart.

{:} ) [3] => Array ( [name] => Sijuk Waterfall 1 [post_id] => 22355 [post_link] => http://offroadbangladesh.com/places/sijuk-waterfall-1/ [thumb_link] => http://offroadbangladesh.com/wp-content/uploads/2015/10/Sijuk-Jhorna-0-300x225.jpg [post_content] => Sijuk Waterfall 1 is located in Rangamati District, but if you decide to have a trip to Sijuk Waterfall (সিজুক ঝরনা), you can form a group comprises couple of ebullient members from Khagrachhari. You may expect poor road condition and other hectic factors. If you start your journey after a quick breakfast from Khagrachhari town, you can start for Dighinala (দীঘিনালা) by using CNG auto rickshaw. It actually costs 500 taka, but you can bargain to manage at best 450 taka. It would be advisable to contact a tour guide for directions. During the journey, you can enjoy the exquisite beauty beside the road from the vehicle. If you start your journey at 8:00 am, then you can expect to reach Dighinala at 10:00 am morning. We can reach Nondoram (নন্দরাম) village by 11:00 at morning through bike. The village is beside the river Kasalong (কাসালং). This village is actually located at the Sajek union of Rangamati (সাজেক, রাঙামাটি). Before this village, an Army camp is located on the way. Travelers must entry their names to that camp. You can have tea in that village and then start your trekking again through the hillocks of Rangamati. Some tribal people pronounce Sijuk canal as Shishuk khal (শিশুক খাল). The canal is formed after joining two mighty streams. The two waterfalls are located at those two streams. You can explore the left side stream first (furthest) and the right side (nearest) stream later. The level of the water depends on the season, but you can expect to face around an average height of 3-4 ft. But at some points the water level is near 6 ft. Also the canal is totally covered with dark forest. As the depth of the water is very high, the flow of the water is less. Lot of rotten leafs are available on the water. At some places, the mud under the water produce gasses with bad odors with bubbles when pressed by feet. The more you progress, the more you welcome the Hati Poka (হাতি পোকা).Those microscopic insect bite can cause lots of pain. Wasps and scary looking mosquitoes are there too. To add these misery, you may find some leafs stinging. A soft brushing those leafs with arms cause you inflammation. After passing through such hideous, you may finally reach near to the waterfall. We can hear the roaring sound of the waterfall but may not see that. That portion of the Jhiri (ঝিরি) is covered with large rocks. All of the rocks are covered with mosses and ferns. Those are the best hideout for snakes and other reptiles. Also crossing those stones are not easy. After jumping and bumping through rocks, you can finally reach in front of the Sijuk waterfall. It is having mighty water flow. Shorter and mightier than other one. ) ) Himchhari Natural Park is just around 5… 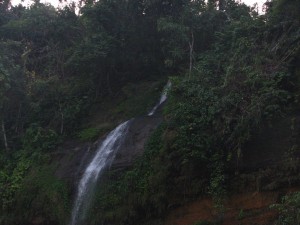 Sijuk Waterfall 1 is located in Rangamati District, but…