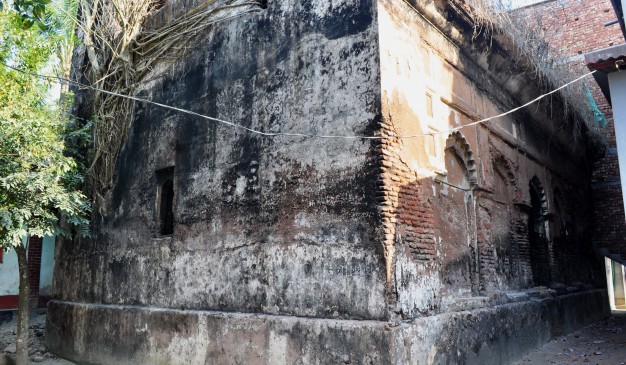 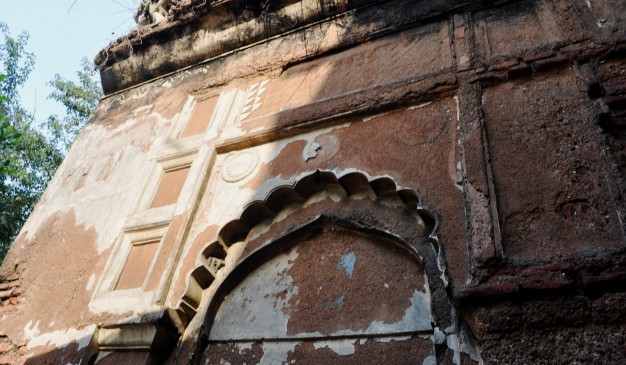 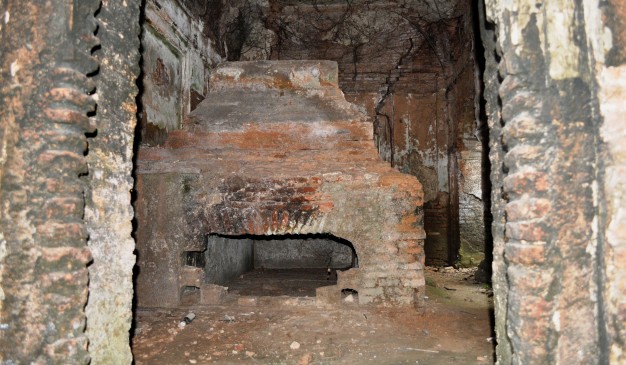 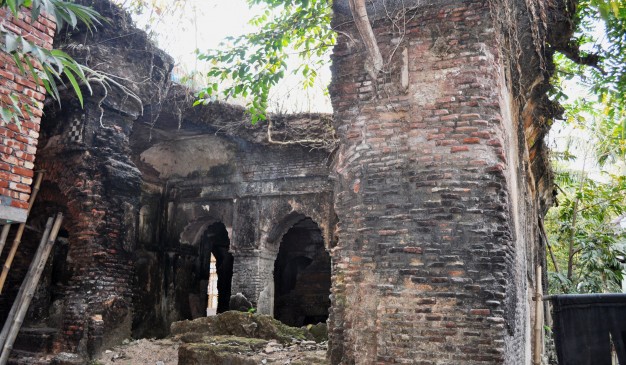 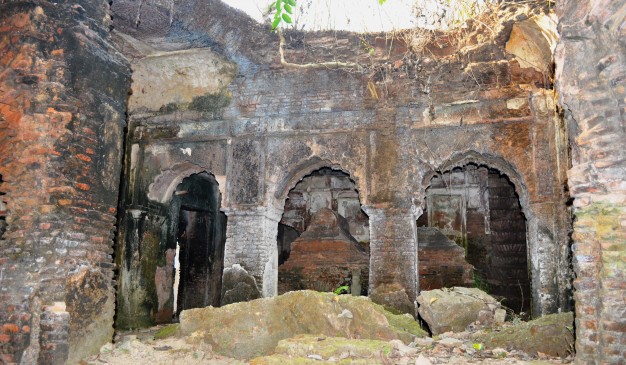 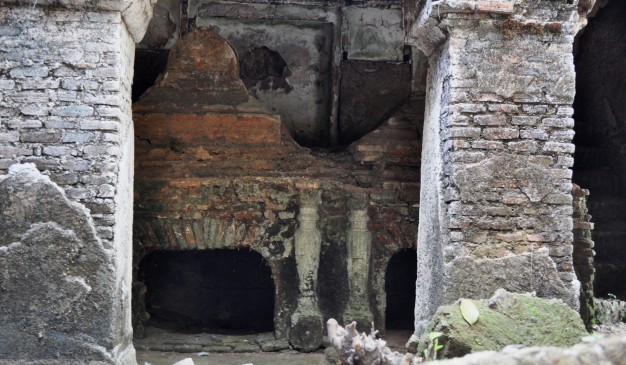 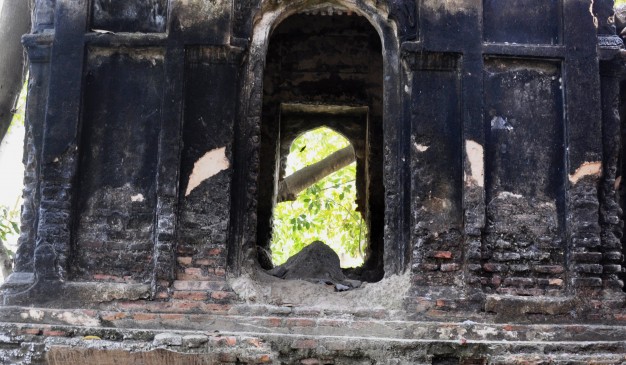 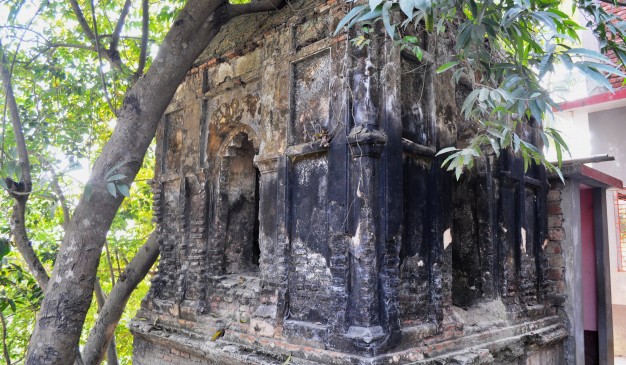 In every single part of Bangladesh there are some Archaeological & Historical remains, which has enriched our cultural history. Lack of awareness and proper knowledge in common people results in gradual ruining of many Historical & Archaeological sites in our country.

One of the great example of deteriorations of an Archaeological site in Narsingdi district is ‘Single domed Mosque and Tomb of Shah Mansur’ located at Kumradi, Shibpur upazila.

It was built in eighteenth century by a Muslim saint named Shah Mansur. In course of time, the existence of the mosque is totally replaced by a new built Madrasa. But, still now the remaining of ‘Tomb of Shan Mansur’ is existing, although it is hard to assume how the original structure was.

Tomb of Shah Mansur, A massive structure which is architecturally rich and decorated with different kinds of design. It is in rectangular shape and built in very unique way. In the western wall of this building there are five arch shaped entrance, among them middle one is open and decorated with multi foil design. Others are Closed arch & also contains the same design like the opened one. The southern side of the tomb is severely disturbed, broken and ruined. Main entrance of the tomb is totally vanished, but still we can observe some three archways very close to the grave of Shah Mansur. It seems like there are two grave inside the building. We assume that other grave might be Shah Mansur’s wife.

There is another unique structure situated in the southern side of the tomb. It is just a square shaped Minar containing open space inside of it, in the roof top it contains a bulbous shaped dome. It has four arch shaped ways in four brick wall.

In the most eastern part of this tomb there is a large pond. Which is probably same years old as the tomb is.

Myth related to this Structure:

There are several myths interrelated with this feature. People say that Shah Mansur used to pet a tiger inside of square shaped structure which is situated in the eastern side of the tomb. Although, It’s a myth but it contains some evidences which might prove it true. Inside of this square shaped structure there are two iron’s ring attached with brick wall.

And it is also said, Once there were some big fishes in the pond. Local people believe that, those fish were actually cursed human being and for this reason they buried those death fish in a grave yard near to Pond.

Present condition of the features situated in this complex is in very sensitive condition. One domed Mosque built by Shah Mansur is vanished and a new Madrasa replacing it. The tomb of Shah Mansur is near to destruction. The whole brick building contains several banyan tree and different species of trees.
The unique square shaped Minar is also near to ruin. Beside this structure there is bathroom built very recently for Madrasa students.

Immediate steps should be taken to conserve and preserve these features from its deterioration.

You can ride on a Dhaka-Bhairab Bus from Mohakhali, Airport, Abdullahpur and Tongi Bus stand. After reaching at Itakhola Bus stand of Shibpur thana, Narsingdi; Then you may step off and ride on a CNG or Auto Rickshaw to reach there.

Referred to where to eat in Narsingdi, click here

Chamchika Mosque is a very old and beautiful mosque which was made by copying chamchika mosque in India. This is near the Khania dighi, also called Khania Dighi Masjid. Chamchika Mosque is located in Shahabazpur Upazila of Chapai Nawabganj.

The photo of this iconic mosque used to be printed on the Ten Taka note of Bangladesh. Nowadays these notes are very rare and are available only at the banks or on in the collection of few people now a days. Atiya is a historical four century year old mosque located at the Delduar Thana of Tangail district. It was named by the village Atiya and the mosque is also known as Atiya Jame Masjid.

Atiya Jame Mashjid is approximately 6 kilometers from the Tangail town. A small river called Louhojong Nodi flows near the mosque which gives it a more aesthetic appeal. The mosque is around 18m by 12m, it has four spherical domes at the top, one is the larger, which is located at the west part of the mosque. Other three are smaller sized and located at the east side of the mosque. All three domes are in a single row. Seems like the bigger one is for the Imam, and other three are for Musalli (regular people). All the domes are decorated at the bottom part and having a small minaret like object at the top. The mosque has four pillars at the four corners and each of the pillars are stylish and decorated nicely.

Shamsur Rahman ( শামসুর রাহমান, 23 October 1929 – 17 August 2006) was a famous poet, columnist and journalist of Bangladesh. Shamsur Rahman, who emerged in the latter half of the 20th century, wrote more than sixty books of poetry and is considered a key figure in Bengali literature. He was regarded the ‘unofficial poet laureate’ of Bangladesh. Major themes in his poetry and writings include liberal humanism, human relations, romanticism, rebellion of youth, the emergence of and consequent events in Bangladesh, and opposition to religious fundamentalism.

Shamsur Rahman was born in his grandfather's house at Mahut-Tuli, Dhaka. His paternal home is situated on the bank of the river Meghna, a village named Paratoli, near the Raipura Upazila of Narshingdi district. He was the fourth of thirteen children. During leisure time, he used to go his Village and there beside the pond near to the house, he wrote one of the great poems

Still today, all the things are in same spatial context. But, the building of his house is in very poor condition. It’s almost on the way to decay.

There is a three domed mosque beside the house of Shamsur Rahman, which was built in the Islamic year 1299.This 137 years old mosque still architecturally fit and being used for regular prayers.

Jamalpur Shahi Mosque is one of the oldest mosque in Gaibandha district. It was built by Hazrat Maulana Shah Jamal (R). There are no specific inscription behind the proper construction period of this mosque. There is a Folklore that a war had been occurred between Hazrat Shah Jamal and contemporary Hindu Raja Khirodhar (ক্ষীরোধার) where Raja Khirodhar was defeated by Shah Jamal (R). For preserving this victory, Hazrat Shah Zamal (R) built this mosque just in one night.

The people who are living here, have strongly believe about this Myth. There is also a pond in front of the mosque which was also built by Shah Zamal in one night. 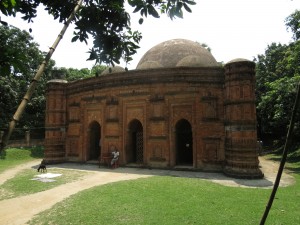 Chamchika Mosque is a very old and… 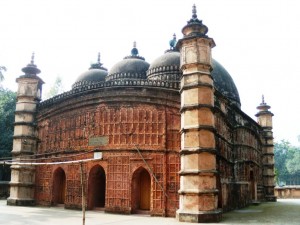 The photo of this iconic mosque used… 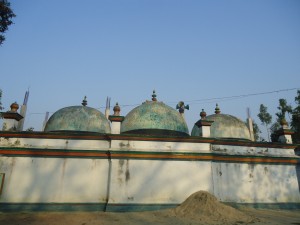 Jamalpur Shahi Mosque is one of the oldest…