The twin temples consist of the Shree Shree Anandamoyi ( শ্রী শ্রী আনন্দময়ী) Shiva and Kali Mata Mandir (কালী মাতা মন্দির). The Hindu Rabidas (রবিদাস) community perform a two-day-long Kattyani (কাত্ত্যানি) Puja, locally known as the ‘Shat’ (সাত) Puja, in the Bengali month of Kartik (কার্তিক). The temple is in dilapidated condition due to lack of repairs.

From the town hall Mor of the Mymensingh city, you can take either CNG driven auto rickshaw, or any local bus for Muktagachha. It may cost 30 Taka per person and required around half an hour to reach at Muktagacha. From Muktagacha, you can take a rickahaw to reach that Zamindar House. On the way to Zamindar House a traveler will have to cross this temple.

You can buy famous sweetmeat Monda (মণ্ডা) from the place of origin known as Mondar Dokan at the gateway of Muktagacha Zamindar House.

There are so many local hotels and restaurants available in the Muktagacha Bus stop and nearby. You may chose one according to your choice

Array ( [0] => Array ( [name] => Ashram of Loknath Baba [post_id] => 22280 [post_link] => http://offroadbangladesh.com/places/ashram-of-loknath-baba/ [thumb_link] => http://offroadbangladesh.com/wp-content/uploads/2015/10/P_20151013_204336_1_p-300x169.jpg [post_content] => Ashram of Loknath Baba is a holy place for Bengali Hindu pilgrimages and religious people in Mymensingh. Everywhere in our country a pilgrim from Hindu religion will find a Ashram devoted for the worshiping. In Mymensingh city ORB team experienced couple of Ashrams on the edge and nearby Brahmaputra river. All around the year people worship here but in the month of June of every year this Mymensingh Loknath Babar Ashram becomes more festive at the event of Tirodhan Dibos (on Tithi) of Baba Loknath. Great quotation of Baba Loknath to his devotees: “Whenever you are in danger, whether in war, forest, ocean or jungle, remember me. I shall save you.” Baba Loknath was born on 31 August 1730 (Bengali calendar 18th Bhadra, 1137) on the sacred day of Krishna Janmashtami in in the village of Chaurasi Chakla, named as Kochua, few miles far from Kolkata, North 24 Parganas, now in West Bengal, India. He is from a Brahmin family. His father name was Sri Ramnarayan Ghoshal and mother name was Shrimatee Kamaladevi. He has lot of followers and devotees around the world. He has traveled many pilgrimages on foot of Persia, Arabia, Israel and Mecca. They believe at the age of 160, on June 1, 1890 C.E. Baba Loknath took his Samadhi (Left his life means died). There is only one photograph is available at present of Baba. ) [1] => Array ( [name] => Gurudwara Nanak Shahi [post_id] => 10226 [post_link] => http://offroadbangladesh.com/places/gurudwara-nanak-shahi/ [thumb_link] => http://offroadbangladesh.com/wp-content/uploads/2015/06/Guru-Duara-11-300x169.jpg [post_content] =>

According to the commemorating, the visit of Guru Nanak (1506-1507), founder of Sikh religion, it is the most important historic place. It is said to have been built in 1830. The present building of the Gurudwara Nanak Shahi was renovated in 1988-1989. The parkarma verandah had been constructed on all four sides of the original building to provide protection. You can go there in every Friday afternoon to pay a visit and see their rituals.

Jora Shiv Mandir is located at the Sukulpotti area of Natore Sadar. It is assumed that this Shiv Temple was established by the adopted daughter of High Queen Rani Bhabani. In Sangskrit language, Shiv means happy/benevolent/kind/eminent. Also, as for a person’s name, it is meant as auspicious/ propitous. This temple is also known as Sree Sree Mohakali and Jora Shiv Mandir.

In the Bangla month of Falgun, the 14th lunar day’s night of dark fortnight is considered as the Shiv-night which is very auspicious for Hindu women. This temple holds the architectural beauty and history of many many years.The outer scenario and design can easily depict the expert artistical work and the inclination of hte then architects. every year, Hindu community celebrate very gorgeous Durga Puja in this temple. Ashram of Loknath Baba is a holy place for… 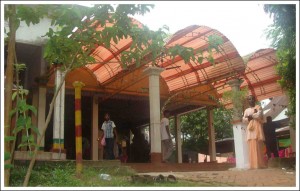