Boro Katra (বড় কাটরা) was built between 1644 and 1646 AD to be the official residence of Mughal prince Shah Shuja, the second son of emperor Shah Jahan. The prince endowed it to his diwan and the builder of the serai, Abul Qasim. The word Katra may have originated from Arabic word Katara which means colonnaded building.

It is a historical and architectural monument located in Old Dhaka, Bangladesh.‘Katra or katara’ in Arabic and Persian means ‘Caravan (Karwan) Sarai’ or simply a ‘Sarai’. It is a palatial building dating to the reign of the Mughal dynasty in the Bengal region. It is situated to the south of Chowk Bazar close to the north bank of the river Buriganga.

Words from the Second inscription of north gateway: “Sultan Shah Shuja Bahadur was famed for deeds of charity-Wherefore being hopeful of the mercy of God his slave Abul Qasim al-Husainia-Tabtaba, As Simnai, Built this sacred edifice endowing it with twenty two shops attached to it, o the rightful and lawful condition that the official in charge of the endowment should expend the income derived from them upon the repairs of the building and upon the poor, and that they should not take any rent from any deserving person alighting there in, so that the pious act may reflect upon the monarch in this world and they should not act otherwise, or else they would be called on the day of retribution. This inscription was composed by Sad-ud-din Muhammad Sherazi” (Dacca, p.193 by prof. A.H. Dani)

Architectural Property: The building’s architecture follows the traditional pattern of the Central Asia’s caravanserai and is embellished as per Mughal architecture. It originally enclosed a quadrangular courtyard surrounded by shops and was overlooked by a row of 22 living cells in each wing. Two gateways were built in the northern and southern wing. The southern wing is a two-storeyed structure and extends 223′ along the river. It is marked in the middle by the southern gateway, an elaborate three storied central archway framed within a projected rectangular bay that provides access to the courtyard. The underside of the arched alcove of the gateway is adorned with intricate plasterwork. The wall surface around the spandrels with plastered panels in relief contain a variety of forms such as four-centred, cusped, horse shoe and flat arches. Each wing is two storied and the corners are marked by tall octagonal towers.

It’s located at Rahmatganj of Old Dhaka, Just very south to the Chalk Bazar Shahi Mosque. From Gulistan Bus-stop it is near about 3km south-west via Kazi-Alauddin road or Nazimuddin road. You can just hire a rickshaw or auto-rickshaw to get there from the Gulistan Bus-stop.

Beside enjoying the enchanting view of the Boro Katara, you can go for a boat trip from the Shadarghat boat terminal which is a few minutes away. You may also taste the delicious & traditional Nawabi foods found in Chalk Bazar area and its surrounding.

The lanlord of pirgacha sub district norendronarayan son of raghabendranarayan died in 1765 without any legacy. Then the wife landowner Joydurga manage the landlord for three decades. This Joydurga is popularly known as Devi Chowdhurani in history.In the time of Sonnasi Bidroho (Sannasi revolution) she keep peace with VobaniPathok and war against English. In this insurgency collector Richard Gudland and army commander lieutenantbrenan got feared and forfeit the landlord of DeviChowdhurani. This time Devi Chowdhurany Levant herself for some days. After that time she again came to manage the landlord and she manage it for 1791. Now all of the building of it damaged. Only the pond is also now there.

This is locally named as "Shaha Bari", built by someone rich merchant. The owner of the house left the house during the war 1971 with Pakistan. Before leaving the country, he somehow able to sell his properties.

After a few minutes of walking distance from the "Shaha Bari", there is another old house, and this one is much larger. Actually this is the mansion of the local Zamindar of here. This house is currently occupied by the local "Land Survey" section of Madaripur. 4/5 government employees used to work here. Also the old house is using by the families of these employees. From my observation, this building is not that much older compare to other Palaces from Bangladesh. But still this place is worth to visit.

Initially the people from there was apathetic to help me, and was curious about my presence here. But after a short talking with them, they started to provide information about this house. And one of the employee guided me to visit the whole Mansion.

Monu Mia Zamindar House, a massive Palace with two conjunctive complex located very near to the Ghorashal Bus-stand of Narsingdi. It was reconstructed in the 1335 BE (Bengali Era) by a land lord of this region named Sazda Mia. This Zamindar House is one of the greatest examples of Classical Colonial Architecture in Bangladesh.

At the front view, meticulously designed Corinthian Columns, arch shaped door, decorated Parapet with leaf's motifs will certainly arise the attraction to observe its inner beauty. Inside of this Palace, it is well furnished and decorated with distinguish design. The temperature in the palace always stays little down than the outside yard.

In the front of the house, there is a huge space for porch. Several ponds surrounding the Palace increases its beauty. 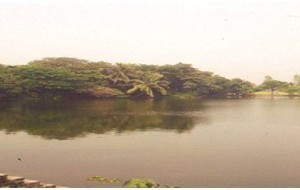 This is locally named as “Shaha Bari”,…