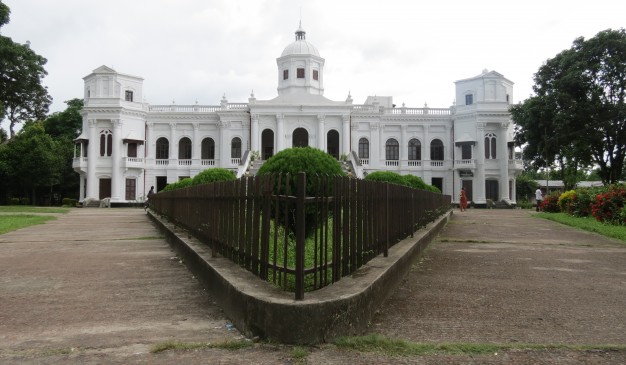 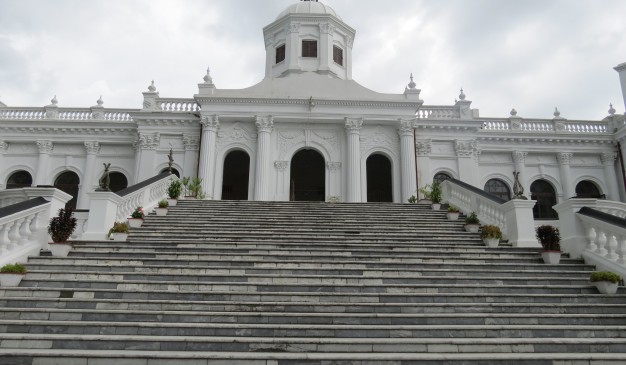 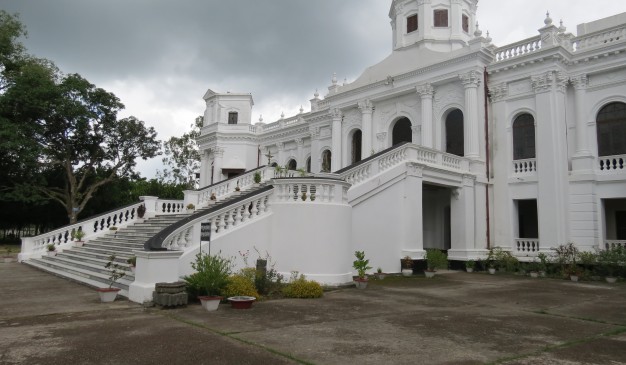 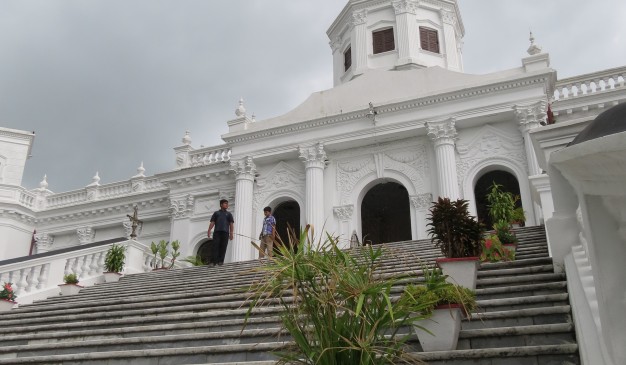 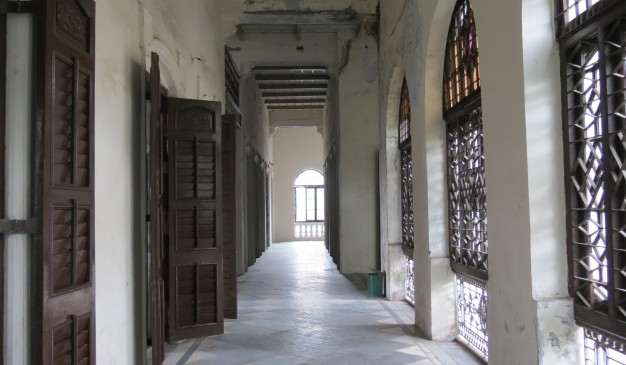 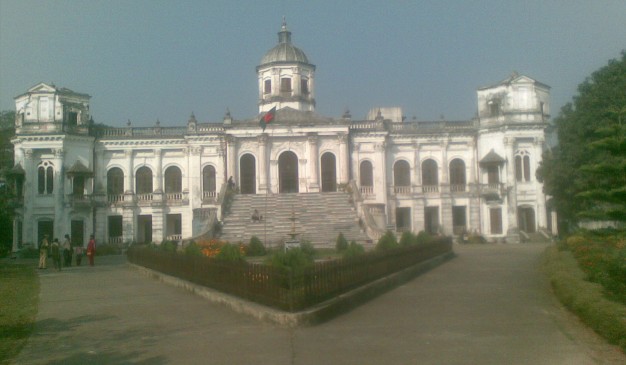 Few of the attractions in Bangladesh are as stately, large and beautiful as the Tajhat Zamindar Palace. This historical palace was built near the beginning of the 20th century. It is situated roughly three kilometers south east of Rangpur’s city center and currently serves as a museum for the public.

The front of this impressive edifice is about 76 meters long and two stories high. A ribbed conical dome supported by a tall octagonal neck is located in the center of the roof and crowns the palace. These are just some of the extraordinary features that continue to attract visitors from around the world to this small corner of the globe. The incredible architectural skill that went into the building and design of this 100-year-old palace is truly something special and visitors often find themselves stunned by the craftsmanship that is found in this amazing structure. It is hard to believe that all this, and the surrounding city, all started as a simple bit of trade involving hats.

Sometime during the 18th century a man by the name of Manna Lal Roy traveled from Punjab in India as a cap or hat merchant.There was a massive cap bazaar where trade was regularly conducted about half a kilometer southwest of Mahiganj and this was where he set up shop. The area was known appropriately as taj (cap) hat (bazaar) and the name has always stuck. Manna Lal Roy was a shrewd businessman who managed to amass quite a bit of wealth through his cap sales. In fact he became so rich that he was able to loan many of the viceroys in the region money during the famine of 1770-1790. This gave him immense power and influence and eventually led to him becoming the founder of the Tajhat dynasty. In the 1900s, one of his indirect heirs, GobindaLal Roy, became the last viceroy and Raja of Tajhat. GobindaLal Roy was the most educated viceroy to ever take his position and under his authority Tajhat flourished. It is thought that the Tajhat Palace was built under his rule.

There are a number of features of the palace that testify to the incredible wealth of the Lal Roy viceroy. Apart from the building’s immense size, the wide stairs that climb to the second story on the front of the building are made of marble. Beautiful pictures can be found on doors and windows.

You can take a rickshaw or auto rickshaw (Battery Driven Rickshaw) to visit this place from Rangpur.
But, if you want to know how to reach Rangpur from Dhaka,  click here

How To Reach: Rangpur District

Dhaka and Rangpur are linked by road. Some of the bus services are listed below for your assistance.

Dhaka and Rangpur is also linked by railway. Some necessary information of train services are given below for your assistance.

The accommodation facilities in Rangpur are now much more developed than before. There are many hotels/motels in the district. Some of the places you may consider staying in Rangpur are listed below for your assistance:

It won’t be a problem to find a suitable restaurant for you to eat here in Rangpur.
To know more about restaurants in Rangpur, click here

For shopping you can visit The Jelaporishod Super Market by the way which is located in the center of Rangpur City.

) [1] => Array ( [name] => Tahkhana Complex [post_id] => 3614 [post_link] => http://offroadbangladesh.com/places/tahkhana-complex/ [thumb_link] => http://offroadbangladesh.com/wp-content/uploads/2015/02/Tahkhana-Complex42-300x225.jpg [post_content] => Tahkhana Complex is located on the bank of a pond called Zahedulbala at a distance of 500m. towards north-west of Chhoto Sona Mosque. Two-storeyed in plan, the building called Tahkhana measures 35.35 x 11.58 m. On its first floor, there are 17 rooms of which two are octagonal. The octagonal room on the north-west was used for performing Salah, while the rest for different purposes, viz-saloon, recreation, dining, meeting hammam etc. The hammam complex proper is located on the south if the Tahkhana. There is a staircase in the south-east corner which leads down to the water level of the pond. There were provisions of supplying both cold and hot water following a channel of terracotta pipe, to the hammam complex. The entire building was constructed with small bricks laid in lime mortar. The wall of the building is decorated with niches and different kind of art motifs at its different points. There are two views regarding the construction of this building. Firstly, Shah Shuja used to come and stay here for his administrative visit, rest and recreational purpose and to meet his spiritual guide Shah Niamatullah (R). Secondly, to provide residential accommodation to Shah Niamatullah (R) during the year 1655 AD. A mosque and tomb of Shah Niamatullah (R) are located on the north-west and north of the building respectively. At present, these buildings are protected monuments by the Department of Archaeology. ) [2] => Array ( [name] => {:en}Kirtipasha Palace{:}{:bn}কীর্তিপাশা প্রাসাদ{:} [post_id] => 989 [post_link] => http://offroadbangladesh.com/places/kirtipasha-palace/ [thumb_link] => http://offroadbangladesh.com/wp-content/uploads/2015/01/Kirtipasha-Jomidar-Bari-Jhalakathi-211-300x225.jpg [post_content] => {:en}

Kirtipasha Palace was named after King Kirty Narayana. Ramjibon sen founded the Kirtipasha palace. The jewels of the family are namely Rohini Roy and Tapon Roy. The contribution of Rohini Roy is Rohiniganj. There is a hospital in that area that is older than the Jhalakathi district hospital. There is also a family living near to the Shiva temple and Shiva's statue.

Kirtipasha Zamindar Bari (কীর্ত্তিপাশা জমিদার বাড়ী) is located at the village Kirtipasha (কীর্ত্তিপাশা) of Jhalokathi district. This is probably a century old house. Now a days, it is abandoned and in a dilapidated condition. For most of the cases only the walls are standing, and the floors or ceilings are disappeared.

The name of the village is after the Zamindar Kirtinarayan Pasha (জমিদার কীর্তি নারায়ণ). And the founder of the Zamindar Bari was Ramjibon Sen. Only one of the building from this massive property was in good condition. Right now that one is a part of a girl's school along with newly built buildings. The Zamindar Bari premise has a Shiva temple inside. And the remaining of a beautiful temple is also exists these days (only the columns and pillars).

Nagarpur Zamindar Bari (নাগরপুর জমিদার বাড়ী) is located at the Nagarpur Upazila of Tangail district. This place is located in an interesting area. It has river Dhaleswari at the eastern side, and the River Jamuna at the western side. It is believed that there were a naval route between the Kolkata and Nagarpur that time. Now the Zamindari system has vanished and it took that route along with that.

The Zamindari of Nagarpur was established during the 19th century by the Jodunath Chowdhury. It's right now a massive complex which is known as Choudhury Bari as well. They are very helpful towards the people of their area. One of the decedent from the family named Suresh Chandra Ray Choudhury was the founder secretary of the famous club East Bengal from this Sub-continent.

Most of the buildings from the complex are in ruin, and few are in good condition. Using those good ones the government has established Nagarpur Mohila Degree College. If you enter inside the dilapidated section of the complex, you can find a hideout for the bats. There are probably thousands of bats rest and start flying away after people’s presence, which create a sharp wind flow from the flapping of the wings of the bats. 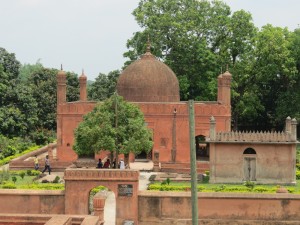 Tahkhana Complex is located on the bank of a… 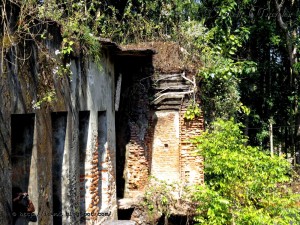