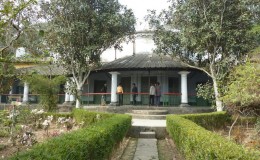 Chuadanga is linked by road and train with the other districts.

Some of the services are listed below for your assistance:

The Rocket Steamer launches from here several times per week heading to Dhaka (Tk 1200/650 for 1st/2nd class per person, 2 per cabin, 26-30 hours) with a few stops along the way including Barisal. It departs Khulna at 2:45AM, but it’s possible to board the boat around 6-7PM the night before and sleep in your berth for no extra charge. The boats launch from Rocket Ghat just behind the train station, where you’ll also find the BIWTC office for ticket bookings.

Chuadanga is connected to four of its neighboring districts (Kushtia, Jessore, Jhenidah and Meherpur) through inter-district highways and connected to Jessore and Kushtia through Railway. The district is connected to the rest of the country by three highways and railway. There are 203 km of finished road, 211 km herring-bone and 132 km mud road. Total length of railway tracks is just over 50 km that connect the three railway stations inside the district with the country’s railway network.

Chuadanga and Dhaka is linked by railway. You can come to Chuadanga by getting on Chitra Express train. It operates every day except for Mondays.