The Chandamari mosque in Kurigram is an ancient Mughal mosque that has been around for centuries. However, the mosque is falling inexorably into ruin due to acid rain and lack of proper maintenance. The mosque is situated in the village of Chandamari in Chakirpasha union under the Rajarhat Upazila in the district of Kurigram. No one knows the exact year the mosque was built or who built it. The locals consider it the oldest mosque in the area, at approximately five hundred years old. The architecture of the mosque is very similar to that of other buildings dating back to the Mughal times. It should be mentioned that there is no department of archaeology in the district. Should archaeologists visit the mosque and perform carbon dating experiments, its year of foundation may be pinpointed.

During a visit to the site, local man Abdul Zalil Sarker and President of the Mosque Committee Jakir Hossen Chowdhury told Star Insight that perhaps future generations will know the exact age of the mosque. “It was built in the 16th or 17th century. It bears some similarities to the structure of the Atia mosque (1609 AD) in Tangail,” a local historian said. Local sources say that though there are 52 decimals of land in the mosque’s name, whilst it is established on only five decimals. The height of the mosque is 45”. There are three large, four medium and twenty-four small domes on top, the four corners and around the mosque respectively. Nine of smaller domes have been damaged.

This mosque, however, is not one of a kind. Hundreds of old buildings with ample antique value and rich heritage are crumbling due to lack of care while others are even being deconstructed. The issue seems to be ignored completely by authorities despite plenty of public interest and protest.

The mosque was made with flat tally bricks, which were cemented together with a kind of paste called Bhishkas. The thickness of walls, roof and domes are 4”. From a long period of continued carelessness, a crack had formed in the center of the 3 large domes. Being unfit, the middle dome was reduced by ½ feet and repaired by the mosque committee, who also built a tin-shed porch in front of the mosque.

After reaching Kurigram, take local transport to visit that mosque.

How To Reach: Kurigram District

Dhaka and Kurigram is linked by road. You can take a bus from Dhaka to reach Kurigram. Some of the bus services have been listed below for your assistance.

There are few accommodation facilities available. Some of the places you may consider staying in are listed below for your assistance.

The main gate of the building is currently locked and no outsiders are entertained to have an entry. So if you go there, make sure you can have an entry, or you have to return from there without visiting that archaic building. According to the local people, the palace is open for public at 1st and 12th boishak (বৈশাখ) of Bengali calendar, and the two Eid days.

Near the Zamindar Bari (জমিদার বাড়ি) an old mosque is available. The mosque is having eight domes in two rows. First row is having five equal sized smaller domes and the second one is having three domes where middle one is the largest. At the eastern side of the mosque, a 15 feet tall minaret is available with old stairs. I don't know the exact built date of the mosque. If you know, you can share as a comment at below.

Softhori Mosque is located at center of Atwari-Boda road and the bounding line of Atwari and Thakurgaon sub-district of Panchagarh. It is the oldest mosque of the district. A person name Sudharu Saha was established Softhori Mosque. No actual information about its formation date. But there is similarity between Softhori Mosque and dome mosque at Mugrapara in Sonargaon in Narayanganj district.

It was built during the Sultani time, in 1478. For the similarity between two mosques it is assumed that Solthori Mosque was established during the Sultani time. Squire Shape Solthori Mosque has only twelve ft. width walls, with no specific place for the Imam. Hence the entry door is very low and only 5 people can pray together once. In the north and south side there are two small door. The wide compound of the front has an arch. Now the arch has changed its real look. The walls is designed with flower and leafs. The Softhori Mosque was affected by earthquake, but was reconstructed in 2007.

A eighteenth century mosque named as Dewan Bari Mosque located at Aminbazar area of Savar, within a clear view from the Dhaka-Aricha highway. There is an adjacent old house to this Mosque known as Dewan Bari. It is assumed that this old house and Mosque built in temporary time. The mosque was built by a leather wholesaler Hazi Janab Ali in 1880 A.D. [from: Abu Sayeed M. Ahmed – Mosque Architecture in Bangladesh – 2006]

[We need more detail information of this spot. If you have more information, then please be advised to add and share in our website. Your name will be published as a Content Contributor] 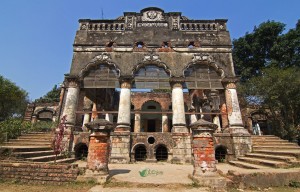 Softhori Mosque is located at center of… A eighteenth century mosque named as…