The university stands on the west side of the Asian Highway, popularly known as the Dhaka-Aricha Road, and is 32 kilometers away from the capital. Spread over a land area of 697.56 acres (2.8 km²), the campus surrounded by the Bangladesh Public Administration Training Centre (BPATC) on the south, and the Savar Cantonment on the northeast, on the north of which is the National Monument (Jatiyo Smriti Soudho) & a large dairy farm on the east. The topography of the land with its gentle rise & plains is shooting to the eye. The water features sprawled around the campus make an excellent habitat for the winter birds that flock in every year in thousands and bird watching here is a favorite pastime for many explorers.

The university was established in 1970 by the government of Pakistan by the Jahangirnagar Muslim University Ordinance, 1970. During the first two years, it operated as a project. Its first Vice-Chancellor, Professor Mafiz Uddin Ahmad (Ph.D in Chemistry, University of Illinois, Chicago) took up office on September 24, 1970. The first group of students, a total of 150, was enrolled in four departments: Economics, Geography, Mathematics and Statistics. Its formal inauguration was delayed until January 12, 1971, when the university was launched by Rear Admiral S. M. Ahsan, the Chancellor. From then to still now 12th January is observed as University day. At the time of starting, its name was Jahangirnagar Muslim University, and the initial plan was to operate this university as like as Aligarh Muslim University. But after the independence of Bangladesh, its name changed as Jahangirnagar University under the act of Jahangirnagar University Act’ 1973.

Jahangirnagar University with a dozen residential halls a few more under construction is mandated to provide residential accommodation to each and every students with separate halls for the female students. Each hall has its own administration system headed by a provost and is equipped with facilities like playground, rooms for indoor games, the dining hall etc.

Jahangirnagar University stands on the west side of the Asian Highway, popularly known as the Dhaka-Aricha Road, and is 32 kilometers away from the capital. There a significant number of buses moving towards JU from different location of Dhaka city. From Gulistan, Farmgate and Gabtoli Bus stop local and direct Buses available all the day. You ride of those moving there at the Varsity via Dhaka-Aricha Highway. After crossing Savar Bus Stop it is Just 10 minutes away by Bus.

How To Reach: Savar Upazila

There are two prime ways to get into the Savar Upazila, One is via Bypass-Nabinagar from Uttara zone (Northern side of Dhaka). Another one is Via Gabtoli-Aminbazar, which is commonly known as Dhaka-Aricha highway. A significant number of Buses moving toward Savar from various bus-stop in Dhaka. Just catch one to be there.

The Bus services moving toward Savar from Dhaka are-

You may enjoy the sight seeing and natural beauty of varsity campus. If you have sufficient time you may explore the botanical garden area of JU campus.
If it is winter then there is a plenty of chances for watching migratory birds. All around the year there are different types of Cultural activity takes places in Selim Al Din Mukto Muncho. If luckily you see something like that you may stop by and enjoy the program.

"Dinajpur Sangeet Mohabidyaloy" a musical college located at Chakbazar of Dinajpur District. It is locatedat the opposite side of "Hotel al Rashid". The musical college was established in 1994. The college was built in British rule time. Its architecture tells so. The red colored building is looking nice. The total building iscombination of red color and white color. In Bangladesh there are two musical college it is one of them. Administrative building is the main attraction of the college. It has two domes which enriching it’saristocracy. At first look it is look like an old palace or Rajbari.

The university was founded by the Government of Bangladesh according to a university act in 1986 to give special importance in science and technology education. It is the first specialized science & technology university of the country. After SUST, seven more science and technology universities have been established in Bangladesh. SUST is traditionally known for research and education in the physical sciences and engineering. It is one of the most selective higher learning institutions, and received 40,881 undergraduate applicants for 2012-2013 session—only admitting 1,385, an acceptance rate of 3.39%.

Shahjalal University of Science and Technology was established in 1986. The campus is located in Kumargaon, approximately five kilometers away from the heart of Sylhet City Centre. The university started its academic programme with three departments: physics, chemistry and economics. The first convocation of SUST was held on 29 April 1998 and the second convocation held on 6 December 2007.

SUST is the first university in Bangladesh providing whole campus free Wi-Fi access for students & staffs. The university introduced an integrated honors course for the first time in Bangladesh and it introduced the semester system (American credit system) from the 1996-97 session. According to the masterplan for the university, within a few years Shahjalal University of Science and Technology will be one of the finest institutions of the region.

The university students invented and introduced the paperless 24/7 SMS Based Automated Registration of Admission Test procedure for the first time in Bangladesh. Interested students can complete the registration process through mobile phone messages. The contemporary government launched the system on 13 September 2009. For the invention, the University won an Ambillion Award in a competition of South Asian countries in 2010 and National Award for E-Content and ICT for Development Award 2010. Now, most of the public universities in Bangladesh have adopted this process of registration.

St Francis Xavier Girls High School is one of the best school for the girls of Old Dhaka. This school is located just beside the Gregory's school. Since it is a girl’s school, the entry may not be entertained by the school authority.

As this school remains close at Saturday as weekend, so you can take a chance to visit the school on holiday. This school was built at 1912 under the same board of the Gregory's school, but later on the board is separated, and now controlling by a different authority.

There are two main building inside the school premise. One is “U” shaped. Half of that building used for the kindergarten students, and rest of it for the school's girls as for hostel. The classroom building is “L” shaped and this one was built at 1993. This white colored white shaped building looks nice, and it has a basketball ground in front of it.

There is a small garden inside the school premise. You can easily find a statue of mother Merry who is holding the earth. This garden is profound with several flower plants and small fruit trees. Also at the other end of the ground, you will find a flat labyrinth which is nicely decorated.

The playground for the students is a bit smaller. Also one corner of the playground contains several instruments for the kids, like the seesaw, slipper etc. There is a small two stored building inside the school premise which almost looks like the brother house of the Gregory's school. It is actually used to keep the exam papers and other stuffs; just like a kind of store house.

Hemnagar Zamindar Bari (হেমনগর জমিদার বাড়ি) is a less highlighted edifice from Bangladesh. Not that much tourists use to travel here despite of having everything to become a promising tourist attraction from Bangladesh. Only local people from around use to visit here. It was built by the prominent Hindu Zamindar (জমিদার) from Tangail (টাংগাঈল) district named Hemchandra Choudhury (হেমচন্দ্র চৌধুরী) at 1890.

The Main building at the front side has two small statues of angel at the top. That's why local people know this as Porir Dalan (পরীর দালান) which means a Palace of Angel. Main building of this Zamindar Bari (জমিদার বাড়ি) is currently using as an administrative building of Hemnagar (হেমনগর) Degree College, but the other buildings at the back side is empty right now. There it has approximately 25 rooms inside.

Front side of the building is having the best styles from the whole premise. It is highly ornate at the walls using colorful glasses. Every inches of the walls, pillars, and the archways are flourished with flowers, vines, stars, etc formed using those colorful glasses.

The Zamindar (জমিদার) was slight cruel and rude on the peasants. They were coerced to follow few rules. For example, if anyone wanted to pass this palace premise, he/she must had to continuously keep vowing and walking backwards with bare feet. Such things must have poured the heart of locals with hatred and grief. That's why the powerful Zamindar (জমিদার) had to escape from the place during the country's separation. Along with the buildings, the whole premise was having 7 massive ponds (only few are right now available). Local people say those 7 ponds are for the seven ladies (daughters and sisters of the Zamindar). Dhonbari Zamindar Bari is very near from this place. 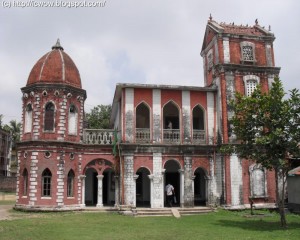 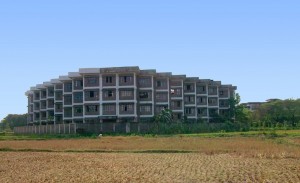 Shahjalal University of Science and Technology 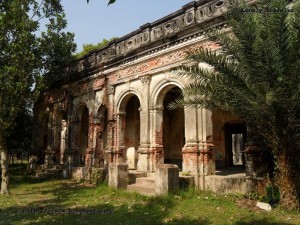