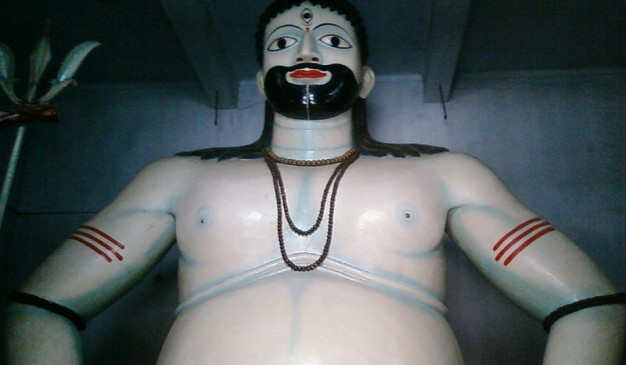 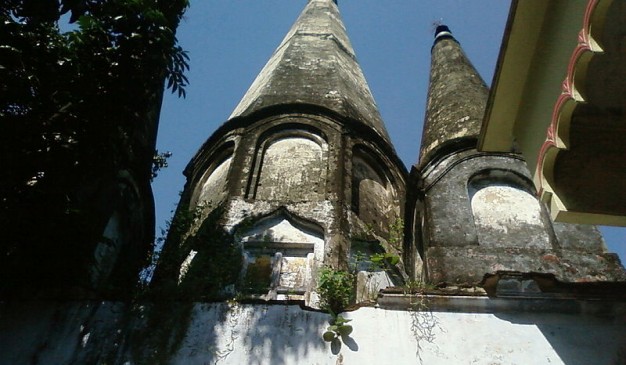 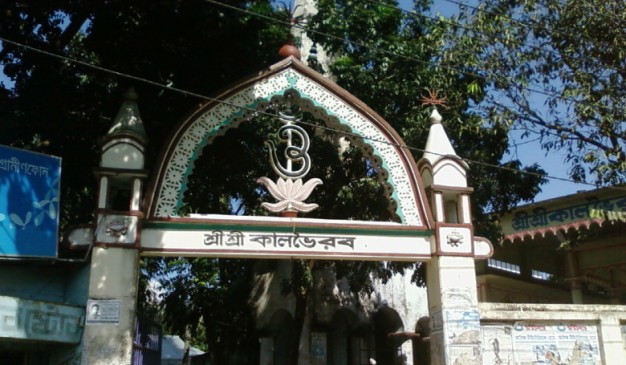 Kal Bhairab Temple is a Hindu temple which is dedicated to the God Shiva. The temple is famous for the giant Shivalinga. Shivalinga is a 28-feet tall Shiva statue. No other statue in the world is assumed to be as big as it. Hindu Lord Shiva known as Kal Bhairab is the main attraction here, but Goddess Kali is also been worshiped. The location of statue of Kali is on the right side of the Kal Bhairab and the statue of the Goddess Saraswati on the left. The temple is a major pilgrimage place for Shaivites in Bangladesh.

The temple dates back to the 19th century. It is said that approximately 200 years ago a sculptor named Durgacharan Acharjee saw a dream which motivated and influenced him to make preparations to build the statue from soil. Noor Muhammad, the famous landlord of Sarail donated the land to build this temple.

Before the Brahmanbaria city was established, Medda was the market located beside the famous Titas river. This market is almost 300 years old. Durgacharan first built this statue by the bank of the river with soil. Regular prayers were held by the local fans until 1971.

During the Bangladesh Liberation War the Pakistani soldiers damaged and looted a lot of Hindu temples in Bangladesh. This temple was one of the damaged temples. The soldiers damaged the parts of this statue using dynamite. Later the statue was made again. It took four years to build this statue again but it reached the height of 24 feet. The current statue is made of stone.

Both regular and annual prayers are held here. People from different regions come to visit this temple. This place is also referred as one of the tourist attractions of the Brahmanbaria district. There are management committees to look after the temple. The giant statue of the Shiva is mostly locked for maintenance issues. The Government of Bangladesh looks after the charges for maintenance.

You can reach Brahmanbaria district both by bus and train. After reaching in there, you have to take a rickshaw or CNG auto rickshaw to travel to this place in Medda.

How To Reach: Brahmanbaria District

Dhaka and Bahamanbaria is also linked by road. You can take a bus from Komlapur Bus Stand of Dhaka to get to the Brahmanbaria district. Some of the bus services are listed below for your assistance.

Some places of may consider staying in Brahmanbaria have been listed below for your assistance:

If you are hungry you may search for nearby local restaurants. You may also carry your own food. Referred to where to eat in Brahmanbaria, click here

Joy Kalibari Temple, one of the oldest temples in Natore, is located in Natore Sadar Upazila at Lalbazar area. This temple is approximately 300 years old, was built around the beginning of 18th century by Dayaram (দয়ারাম) Roy (1680-1760), the great and influential Dewan of Queen Bhabani (1716-1795) of Natore and the establisher of Dighapatia Royal Family. This temple has 2 buildings. Alongside the main building, in the right, there is a Shiv Mandir. Every weekend, people from all over the district come to this historical and beautiful temple to worship and pay their respects. There are various religious occasions like Durga Puja, Kali Puja etc. which are being celebrated here every year with much pomp and splendor.

Sri-Sri Madan Mahan Ziub Kali Mandir (শ্রী-শ্রী মদন মোহন জিউব কালী মন্দির) is situated at Gobindaganj Upazila under the district of Gaibandha. It is approximately half kilometer away from Raja Biratnagar. A banyan tree and pond is situated just in front of the Mandir Complex. Everyday many tourist from different places come to visit here. Specially, in the month of Boishakh a fair is celebrated here.

A huge number of moth (মঠ) has been found all over the places in Munshiganj District. Shyamsiddhir Moth is one of the old moth, which is located in Shyamsiddhi village, to the west of Sreenagar Bazar under Sreenagar upazila in Munshiganj district. A Bangla inscription fixed over the doorway in the south side implies that it was constructed by one Shambhunath Majumder in 1243 BS/ Shakabda 1758 (1836 AD). The math is named after by its location.

The building is square in plan, measuring 6m externally, and the walls are 1m thick. This brick built math stands on a 1.20m high platform, and is about 20m high. The moth is divided into three stages. The lower square part is the main shrine. On its south side there is an entrance with pointed arch, flanked by a rectangular panel on its either side; while each of the other three sides contains three rectangular panels in plaster, of which the central one is bigger than the flanking ones. Over the lintel level, all four sides are relieved with two semi-circular arches - one above the other - set within a rectangular frame under a large semi-circular arch. A sun emblem in plaster is depicted in the small arches.

The entire surface of the walls were originally plastered, but now have fallen at places. The shrine is covered by a dome, over which the base of the tapering shikhara (spire) is transformed into an octagonal shape at its second stage. Internally, the dome is supported on half-domed squinches and multi-cusped corner arches, while the side walls are relived with ornamented arched panels. Above these arched panels and corner arches medallions are depicted. The interior of the dome is ornamented with two bands of floral motives at the base.

At the octagonal second stage there are eight pilasters on the eight corners. The large rectangular area in each side is decorated with large window panels with closed shutters. Above the window panel runs panels containing a group of serpent hoods and floral leaf pattern alternately around the eight sides. Above each of the eight sides there is a curved chala decoration, from which the uppermost stage of the math rises in a tapering mass. The shikhara was once crowned with kalasa finial, but is now missing, although the iron trishul (trident) is still standing.

It is a typical single shikhara type of math with a series of repeated curved vertical mouldings, similar to the sonarang twin temples.

Vatodara Shiv Mandir (ভাটোদাড়া শিব মন্দির) is located in Dighapatia near the Dighapatia Rajbari. This temple was established near a 100 years ago, as the local says. Whereas, Vatodara Kalibari, mainly uses for worshipping in various occasions, was built recently. In various occasions like Durga Puja or Kali Puja, people from Hindu religion of this locality greatly celebrate their rituals here. Although, Vatdara Shiv Mandir remains almost dysfunctional and out of care, people of the area largely come and worship in Kalibari. A huge number of moth (মঠ) has…