Kopotakkho River the pre-Dravidian term ‘Kabadak’ was transformed into ‘Kapotaksha’ [Kapotaksa] (meaning the ‘pigeon-eyed’) in Sanskrit. The river ichamati branched into two streams at Darshana in Kushtia district. One flowing southeast is known as the bhairab. At the south of Kotchandpur, an offshoot branches out from the Bhairab and flowing south meets with the shibsa near Paikgachha in Khulna district. This offshoot of the Bhairab is the Kopotakkho. Once upon a time, the water of this river was clear and transparent like the eyes of a bird. ‘Kapot’ means pigeon and ‘Aksha’ means eye.

The Kopotakkho originated from the Mathabhanga River with a great meander. A canal was dug to run the river along a shortened course avoiding the meander and the Kopotakkho got disconnected from the Mathabhanga. The Mathabhanga splits into four main channels-the Churni, chitra, nabaganga and kumar-within Kushtia district. The Churni joins the Bhairab, to become an important source of its Khulna-Ichamati branch. The Chitra flows south-southeast to Uzirhat, where it splits into two streams, the Khulna-Atari and the Chitra, the former joining the Bhairab north of Khulna town, while the latter joins it in the south. The Nabaganga is another decayed channel, navigable in the rainy season up to Magura. The lower Nabaganga channel takes much of the Gorai’s flow into the pasur. The Kumar, also called the Pangasi, branches from the Mathabhanga, 16 km from Alamdanga town, and flows southeast to a point 8 km north of Magura town, where it splits into two channels. One of the channels falls into the gorai, and the other joins the Nabaganga through the Muchikhali.

Later on, the Kopotakkho maintained its principal discharge from the Bhairab. Disconnection of the Mathabhanga from the ganges and again disconnection of the Mathabhanga and the Kopotakkho resulted in a very narrow flow. From the monsoon the river receives only the local rainwater and percolated water and loses its navigability at most places. In summer, the river almost dries up near Jhikargachha. The high levee near Tala upazila indicates that once upon a time the river might have had a width of 750m, but it is now only about 170m; but at Chandkhali the figure is about 300m. The river was about to die, but the Bangladesh water development board maintains a flow from the Ganges by pumping, providing irrigation to its buffer area in the ganges-Kopotakkho irrigation project (G-K Project).

The water of the Kopotakkho is being used for irrigation also in some places of Jessore district through pumping. The Kopotakkho along with its branches and sub-branches drains about 3,315 sq km of Kushtia, Jessore and Khulna districts. The river is navigable in Khulna district and there is a launch service plying on the river. The total length of the river is about 260 km.

The Kopotakkho is under tidal influence but not above Jhikargachha. To protect it from saline water a long salination protection embankment has been constructed along its bank. Irrigation is not suitable in parts of Khulna district due to salivations. Saline water is however very suitable for shrimp culture.

At first a traveler has to reach Khulna or Jessore then head to Kesabpur by using local buses or other means of transport, whatsoever is available.

How To Reach: Jessore District

By Air:
Jessore is also linked to Dhaka by air. Airline companies offering flight service from Dhaka to Jessore have been listed below:

Several buses leave from Dhaka, Gabtoli station to reach Jessore. Some of them are listed below for your assistance:
1. Hanif Enterprise
Gabtoli Counter, Contact: 8016040, 8011759
Fare: TK 280 (Approx.)

Jessore is also linked to Dhaka by air. Airline companies offering flight service from Dhaka to Jessore have been listed below:

The price for Khulna ranges from 390-1390 BDT and Jessore 350-1260 BDT depending on the compartment selected. It is approximately 238 km away from Dhaka. A tourist from Jessore may take Bus or CNG auto rickshaw and go through the Jessore-Chuknagar road. From Khulna main road a traveler has to go to Khulna Satkhira highway.

The district of Jessore holds many hotels you may consider staying in. Some of them have been listed below for your assistance:

A tourist has to search for restaurants and fast food shops nearby. Referred to where to eat in Jessore, click here

Mighty river Meghna's branch is located eastward to the Narsingdi Sadar. It is used as a river ghat to move in various directions from Narsingdi District. If someone pays a visit there at the Ghat, he/she may observe a cluster of wood made engine boats awaiting for passengers. It is a place largely of gatherings all the day long. The launch terminal is just steps away from this Ghat.

Kocha River is a much larger river from the Southern part of our Bangladesh. It is created when the two famous rivers Modhumoti and the Shondha merged together near at the Hularhat (হুলারহাট). After converging the two rivers it got a new name Kocha (কচা নদী) and carrying this new name until it falls into the Bay of Bengal.

Most of the main rivers from our Southern Bangladesh are having bridge on them to ease the communication. But for some unknown reason, this river Kocha (কচা নদী) is not having any bridge. And the communication between the Bagerhat (বাগেরহাট) or Pirojpur (পিরোজপুর) and Barisal (বরিশাল) is hugely dependent upon this river. One has to wait for around 30 minutes to 2 hours to cross this river. Where as a bridge can reduce this duration into few minutes.

The Padma River (Bengali: পদ্মা Pôdda) is a major trans-boundary river in Bangladesh. It is the main distributary of the Ganges (Bengali: গঙ্গা Gôngga), which originates in the Himalayas. The Padma enters Bangladesh from India near Chapai Nawabganj. It meets the Jamuna (Bengali: যমুনা Jomuna) near Aricha and retains its name, but finally meets with the Meghna (Bengali: মেঘনা) near Chandpur and adopts the name ‘Meghna’ before flowing into the Bay of Bengal. Three side of the shariatpur is bounded by river. Padma river is bounded Shariatpur by various name such as Padma, Meghna & kirtinasha. 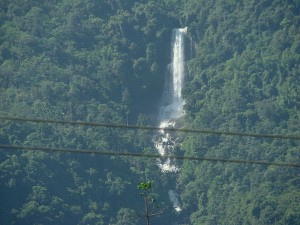 Kocha River is a much larger river…