Kartalab Khan Mashjid or Mosque of Kartalab Khan (কর্তালাব খান মসজিদ) is located at the Begum Bazar of Old Dhaka. It was built by the Dewan Murshid Quli Khan, also known as Kartalab Khan during 1701-1704, and the mosque named after him. For its location, people used to call this as Begum Bazar Mosque. Hardly very few people know this mosque as Kartalab Khan’s Mosque now a days. The Google Map coordinate of the mosque is (23°43’2.03″N, 90°23’54.59″E), near to the Dhaka Central Jail.

Like any other mosques of that period, this one was built over a plinth like high vault. This mosque has five domes at the top of it, and an extended do-chala (দো চালা) like room at northern side. Though it was built around 300 years back, but now a days none of its antiquities are available.

There are buildings around the mosque those are using as market. So you can easily use any of those. This mosque could have been used as a token of our glorious past if it were handled with great care.

Mughals subadar MANSUR KHAN donated 10.56 acres of land for Nidariya Mosque and built it in 1176. In that time there was Motayalli as Ijar Mahmood Sheikh, Bijara Sheikh Mahmud,and Khan Mahmud Sheikh. People says because Subedar Mansur Kha’s not of having dari(দাড়ী) for that the mosques was known as Nidariya. Now the local people pray in this mosque.

Chuna Khola Mosque or single domed square mosque is similar to Singair Mosque and Bibi Begni’s Mosque. Chuna Khola Mosque has three pointed arched entrances, rectangular frames border the north and south sides. The mosque has three Mihrabs along the west wall corresponding to the three doorways on the east. The central one is huge. Rectangular frames border the Mihrabs too with terracotta decorations. A horizontal row exists at the top. There is a Kalasa motif in the middle of the row above the central frame. The interiors of the Mihrabs are extensively decorated with terracotta motifs.

Unlike any other mosques from around, this one was having plenty of spaces around. In fact it was at the middle of the field (paddy or other seasonal). It is a single dome mosque and the dome is noticeably larger one. Also, the dome isn't placed at the center of the mosque. From my observation the dome is inclined slightly towards the Northern wall.

Apart from the beautiful semi spherical dome atop, the mosque is having three doors at the Eastern wall. And a single door each at the Northern and Southern walls. The mosque has beautiful four columns at the four corners of the mosque (similar to any other from it's contemporary). The shape of this Chunakhola Mosjid is square.

Zinda Pir Mosque (জিন্দা পীরের মসজিদ) is very near from the Khan Jahan Ali Mazar. This is a small square shaped mosque having a dimension 6x6 (in meter). It has a single dome at the top. The Eastern side of the wall has three doors and other twos (not Western) are having a single door. This mosque was in ruin and restored during 2002.

During that restoration process the mosque has lost its most of the antiquities. They believe the guy who built this mosque was a holy man. He was reciting the Holy Quran one day and disappeared. That's why the believe that the guy is not dead yet. And hence they call him Zinda Pir (জিন্দা পীর), and call the mosque as Zinda Pir Mosque (জিন্দা পীরের মসজিদ). In English, the word Zinda Pir (জিন্দা পীর) means an alive holy man. This story doesn't have any authentic source to believe. It is simply the way they believe this. This mosque premise has a lot of old graves around. Those are not having any naming and that's why it is unsure about the graves. Also it has a Mazar (মাজার) near the mosque and lot of people pray on there.

Bozra Shahi Mosque is an elegant historic mosque. Amanullah built it during the 1741-42 AD and later it was repaired by the Bazra Zamindar named Khan Bahadur Ali Ahmad and Khan Bahadur Mujir Uddin Ahmad. This mosque has similar complexion of the mosques during that era. The main difference is the stylish outer walls. It has three domes at the top; the middle dome is slight larger. 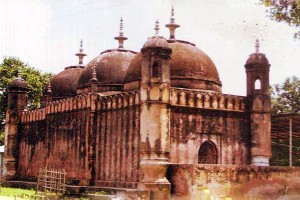 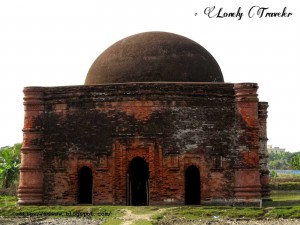 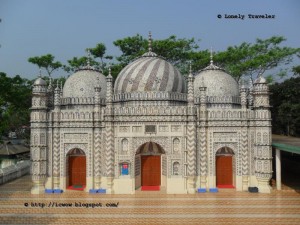