Belabo Bazar Mosque,a grand mosque constructed with Tk 35 million, was inaugurated on 8th of November 2008. At least 12,000 people can say their prayers at a time at the mosque of 200 feet length and 125 feet width. Renowned industrialist of Narsingdi district Abdul Kadir Mollah carried the whole construction cost of the mosque.

The first founder and land owner of the Moque named ‘Alhajj Mahmud Ali Bhuiyan’ donated his land for building this Mosque. Who is known as ‘Mamdi Bepari’. Later Abdul Kadir Mollah announced his grand donation on a public place in Belabo to build this Mosque as a Mega Structure. Local people feels proud to be the inhabitants of this Upazila. Many people from different direction come to visit this Mosque everyday.

You can take a look at lotkon(লটকন) Garden all the way down from Morzal/ Shibpur bazar Bus stop to Belabo Bazar. Greenish garden environment will make you feel the real natural beauty. You can observe the interior and exterior view of this Mosque. Its architectural beauty will make you amazed in some ways.
This zone is archaeologically very rich.If you move on season,at the time of excavation generally held in ( December-march) you can take so many picture of special structure or building underneath the surface.

Referred to where to eat in Narsingdi, click here There are also some options available at Belabo Bazar.

This spot is located in Shibganj Upazila of Chapai Nawabganj district. Tin Gomguj mosque is a special attraction of the Mughal era. There are 3 entrances and 3 mihrabs inside the mosque. The architecture of the mosque is not much artistic. Locals pray in this mosque frequently.

Beside the bank of the Ichhamoti river (ইছামতি নদী), you'll find an old house that is currently abandoned. No inscription was found about the house. From the architecture of the old house, you can only guess that it was a house of a wealthy man who could have been a Zamindar (জমিদার) or a rich merchant. Boktnogor/Boktonogor(বকতনগর/বক্তনগর) is a place located near the Shikari Para(শিকারী পারা) after Bandura bazaar(বান্দুরা বাজার).

This well-built edifice has lot of rooms inside. Front side of the house is still firm, but damaged at the back sides. Still now a days the house has a lot of open spaces around including ponds. At the south-west corner of the mansion, another edifice is available. This one is an old mosque. Again it is unsure about the builder of the mosque.

If the owner of the mosque and the house is the same person, then the owner must be a Muslim. The village name is Boktnagar (বক্তনগর) which should came from Bokht Nogor (বখত নগর). Possibly someone lived there named Bokht (বখত) and sounds a Muslim name, but all are predictions.

The mosque is a small one having three domes at the top. Middle one is a bit larger compare to other twos. Just above the main gate, and inscription is found written in Arabic. The mosque has a pond at the southern side and a graveyard at the eastern side.

This is a six domed mosque. It was completely dilapidated and only few walls were available. But the government totally renovated this mosque recently. There is no road available to reach near to the mosque. You have to walk through the mango garden and beside the fields. You have to rely on your GPS (24°49'54.71"N, 88° 9'1.17"E) device, or the local villagers to be you on the correct route.

This spot is located in Shibganj Upazila… 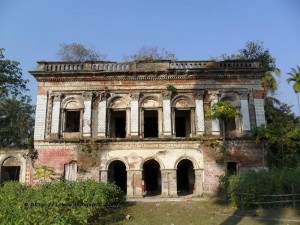 Beside the bank of the Ichhamoti river… 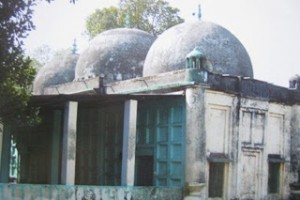 This three-dome mosque is about 200 year’s elderly. A… This is known as Dhuni Chawk Mosque…