Fegnasar Shiva Temple (ফেগুনসার শিব মন্দির) was built in the reign (1159-1185 AD) of great King Bollal Shena. Another conception said, it might be built between 1725-1758 AD during the reign of King Raj Bollov. In course of time, it was on the way to destruction. Then, Moharaja Raj Bollov took some initiative to reconstruct that. It can not be assured who particularly built that temple. King Ballav was a great devotee of Shiva.

This temple is in rectangular shape at base,measuring 15 feet length,10 feet width and about 25 feet high from the ground. Very common constructing material like bricks, cement and limes being used to build that temple. At the last day of full moon night in every Bengali month of Falgun, there is a large festival of worshiping being held here.

There are so many stories being populated among common people about the builder of that Temple. Inside the temple, there is a large “Shiva Lingha” (শিব লিঙ্গ) (Phallus) placed. According to the local people, this is the largest phallus brought from South India (not true at all,because largest one is located at Faridpur District). Just about 100 meter away, there is a branch of Dhaleswari river flowing.

Dolmancha Mandir is located at the place name Dhamsreni about 3 km east from Ulipur sub district of Kurigram district. Now it becomes ruin. This Temple or Mandir is located at the home yard of Braksama Priest who was appointed by (1658-1787) landlord Rani Satyabrati. Here has more some Temple but all of the mare seriously damage by 1897 earth quake.

Temple of Sree Chaitannya Dev is 500 years old. The temple is very famous and an attractive tourist spot for people residing in Golapganj. The place is admired for being the forefather’s home of the famous Vaishnava saint.

On the same day as above Swami Premananda Laid the foundation stone of an indoor hospital with twenty beds as its service activities. In this year i.e. 1916 the Mission work was transferred to its permanent place from the rented house. After 8 months,first Governor of the East Bengal, Lord Carmichael inaugurated the opening ceremony of this medical service centre. In March of this year Dhaka Ramakrishna Mission received the affiliation of the Headquarters at Belur. The Ramakrishna Mission Authority of Belur appointed the local executive committee to manage the work. After 85 years crossing the temple had reached its dilapidated condition. The main construction work began in 2000.

Architectural significance: The temple has a capacity of sitting for about 600 persons, while the height of the temple, say, 80 ft from the ground level, with a completely new and pleasing out looking both inside and outside differ from any other temple of Ramakrishna Order. It has 5 entrances. The shrine room with hexagonal view has been made in such a way that devotees can see the shrine from every side of the temple except back. The main dome is surrounding by 6 small domes with the symbols of 6 religions in their pinnacles, presenting the universality of Ramakrishna Order on the basis of Sri Ramakrishna's realization “as many faiths so many paths." The basement with an area of 5500 sft will be utilized for the purpose of a museum, casual exhibition, discourses and seminars on religions and cultures of different faiths and on topics of learning. Dolmancha Mandir is located at the place… 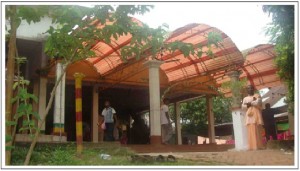 Temple of Sree Chaitannya Dev is 500… Ramakrishna Mission and moth is a historically…