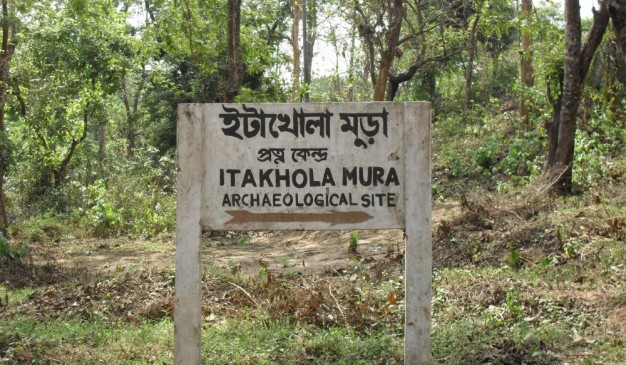 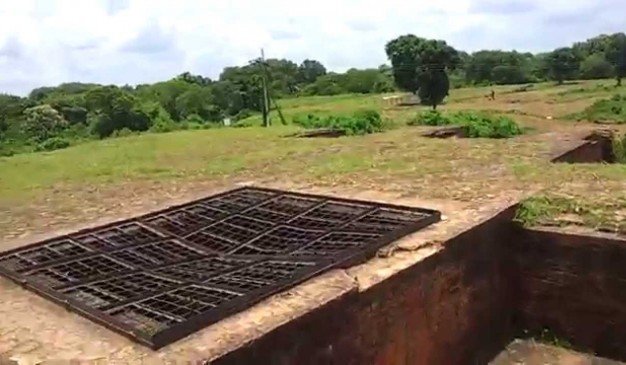 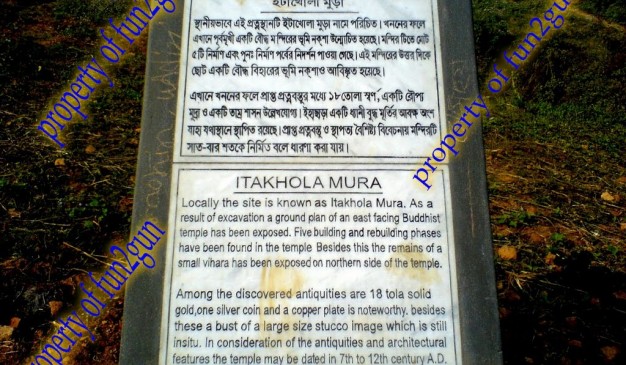 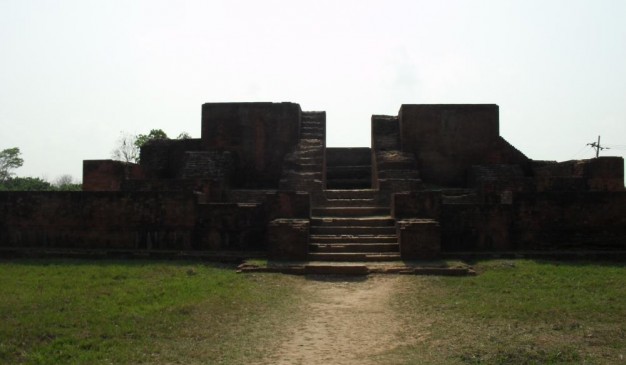 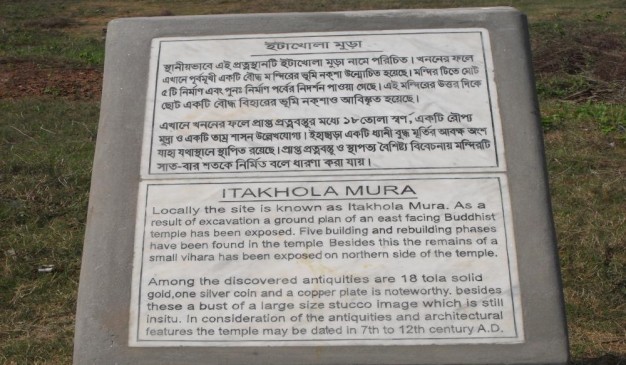 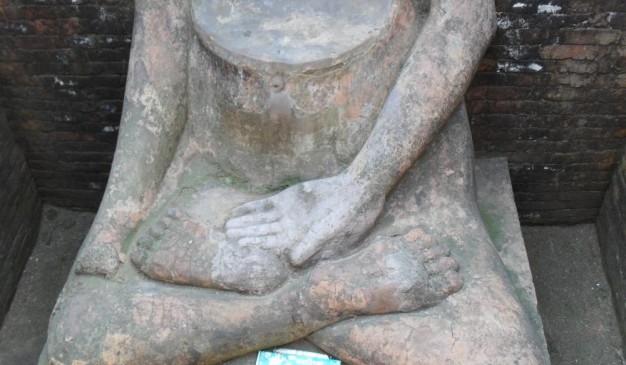 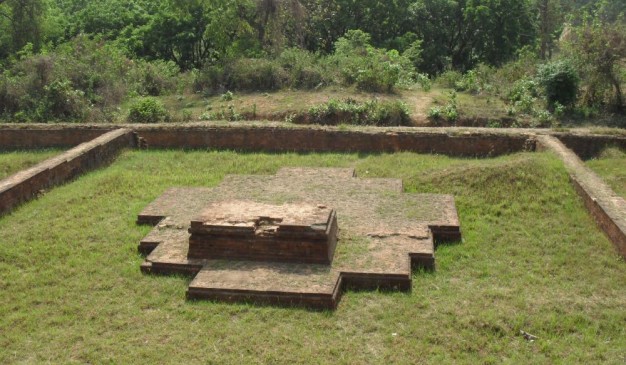 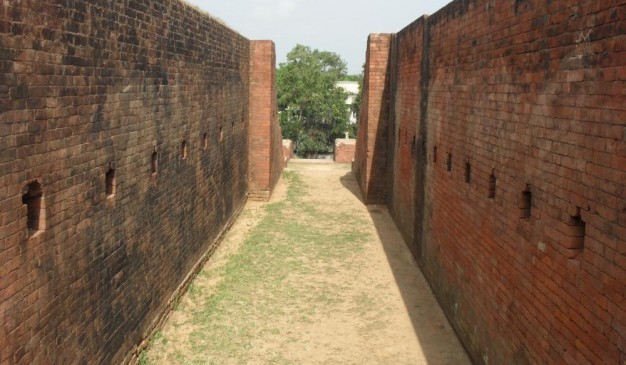 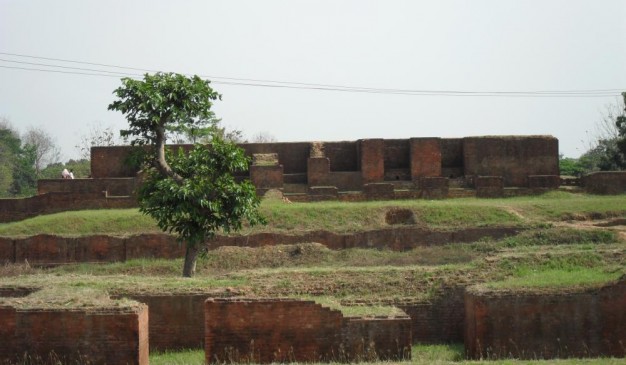 Itakhola Mura is an archaeological site in Mainamati. This site is one of the most impressive ruins. It lies in three terraces on adjacent hillocks just opposite the Rupban Mura site across the Kotbari road in Comilla. Excavations have revealed here a grand stupa complex with an attached monastery, located 42m to its north. The cultural phases of the site are stated (or overstated) to be five; the earlier three being still buried underneath the later remains.

The Stupa Complex was originally built as a solid stupa in the traditional style on a 13.1 meter square basement. However, it has one peculiarity; a small sanctum (2.4 m x 2.1 m) built in the center of its eastern or front side.

Subsequently, the shrine was enlarged and elaborated by additions and alterations, especially by adding three long narrow chapels in the eastern side after blocking the old sanctum; thus giving the structure an oblong shape (41.4 m x 24m). In this particular feature, it is strikingly similar to the Rupban Mura shrine. The side chapels were ultimately blocked up, leaving space for a few cubicles for installing cult images, as in other parts of the shrine. This establishment is surrounded by a 2.6 m wide circumlocutory passage and is enclosed by a 1.2 m thick boundary wall.

This holy precinct is again enclosed within a much larger, well-defined, and better preserved boundary wall (79 m x 56 m), in the slightly lower second terrace. It contains three interesting subsidiary shrines, two in two corners of the eastern side, and the other, a slightly larger one, at the back in the west. An elaborate entrance with 22 broad steps at the Center of the eastern side leads to the much lower third terrace. The outer face of its damaged boundary wall in this front side is excellently decorated with offsets, sunken panels, and ornamental designs.

Five votive stupas lie at the base of the long staircase, three of them in a north south row within a well-defined enclosure, all semi-cruciform in shape, like that of the larger subsidiary shrines in the western side of the second terrace. They certainly represent an experimental early stage in the development of the cruciform style in Buddhist architecture that we see in mature form at shalvan vihara, paharpur, Vikramashila and many other sites. These structures may reasonably be dated as belonging to 7th-8th centuries AD.

The Monastery This medium sized monastery of the usual square shape with 19 cells and one entrance hall was built around an open courtyard, 16.2m. Square, on a separate mound. Its monumental gateway complex, 17.6m x 8.5m, projecting outwards, lies at the Centre of the eastern wing. Some of the cells have brick-built bedsteads. This structure was badly damaged by brick-hunters in 1944-45.

Mentionable antiquities from the site, besides the stucco image, are three round pellets of solid gold, (19 tolas), and a copperplate inscription, discovered during clearance work after the excavations. The copperplate has not yet been deciphered.

After reaching at Comilla Sadar Upazila, take rickshaw to visit this spot which is located in Kotbari area.

Sat Masjid is located in the Mohammadpur area of Dhaka city, the building exhibits seven domes- three over the prayer chamber and four over the corner towers. Hence it is known as Sat Gombuz (seven domed) Mosque. The mosque occupies the western end of a slightly raised masonry plinth 26.82m by 25.60m, which is enclosed by a low wall with a gateway in the middle of the eastern side. This arched gateway with flanking ornamental turrets is exactly in alignment with the central doorway of the mosque proper. The top of the gateway could be approached from either the north or the south by an ascending flight of steps. The mosque proper forms a large rectangle 14.33m by 4.88m on the inside and is emphasised with massive hollow domed towers of octagonal design on the exterior angles. The prayer chamber is entered through arched doorways - three in the east and one each on the north and south sides.

Corresponding to the three eastern archways there are three semi-octagonal mihrabs inside the western wall. Beside the central mihrab there is a three-stepped masonry pulpit. The central archway and the central mihrab, including two other archways on the north and south walls, have outwardly projected frontons depicting ornamental turrets on either flank.

The interior of the mosque is divided by two wide arches into three conventional divisions - a large central square bay and a smaller rectangular bay on either side. The roof is covered with three slightly bulbous domes on octagonal drums, the central one being bigger than its flanking counterparts. The large central dome is supported by the wide arches together with the two blocked arches over the central mihrab and central archway and the triangular pendentives on the upper angles. But in covering the side rectangles with domes a clever method has been adopted. In order to make a circular base for the dome, the rectangular space has first been made square above by creating half-domed vaults on the east and west walls. These half-domed vaults together with a further series of pendentives on the corners directly support the small domes.

The corner towers have flanking turrets like those in Khwaja Shahbaz’s Mosque and musa khan mosque, both in Dhaka city. Each of these consists of two storeys and is a monument by itself. The lower storey is pierced with four cardinally set arched openings in the north-south and east-west axis. Internally the roof of the lower storey is domical, but its reverse side is flat and forms the floor of the upper storey.

Charpatra Mura is a small but interesting archaeological site in Mainamati. It is situated in the northern part of the Lalmai ridge at about the center of the Comilla Cantonment area. A small Hindu shrine, 45.7m × 16.8m, was uncovered here. The shape and architectural design and decoration are unique; differing basically both from the Buddhist architecture of Mainamati and the traditional Hindu temple architecture of the Gupta or other Indian types. It appears to represent a synthetic Bengal type that has evolved gradually by assimilating certain elements and features of local Buddhist architecture.

The temple has two distinct parts, an open pillared hall in the badly damaged front part and a cell at the back in the west. The latter part was found less damaged and decayed, that is to say, better preserved and undisturbed. It could therefore be properly excavated and uncovered. The exterior of this cella or temple proper at the back shows a fantastically complex and variegated shape produced by a multiplicity of angles and corners resulting from a combination of symmetrical projections and offsets at lateral and vertical planes, maintaining, nevertheless, a delicate balance between exotic growth and basic strength and proportions of the original form and the traditional plan. The overall effect is highly pleasing.

A few very significant objects were discovered in this monument. These are a bronze relic casket and four copperplate grants - three of them issued by the last two kings of the chandra dynasty and the fourth by a Later-Deva king, all in favor of a Ladaha Madhava (Visnu) temple situated in devaparvata. One record identifies the locality as Pattikeraka. On the basis of our present knowledge and information, it may be stated with absolute certainty that this new settlement was definitely located in the Lalmai -Mainamati area, and occupied a part or the whole of the old city of Devaparvata, and that the Ladaha Madhava temple of the inscriptions may reasonably be identified with the excavated Charpatra Mura temple.

The temple was probably reconstructed, if not originally built, by the Chandra King Shri-Ladahachandra (c 1000-1020 AD) who derived his name from that of the consecrated deity. Alternatively, the deity derived its name from that of the builder king who appears to have been especially devoted to him. This king issued two of the four grants found here. The appellation, Charpatra Mura, is related to the discovery of four copperplates.

Rudrakar is a famous place in Shariatpur. It was built 150 years ago. It's been evaluated one of the Sacred places for Hindu religious people. It stands at Rudrakar Union in Shariatpur. Everyday, people from different directions come to visit this place. Sat Masjid is located in the Mohammadpur area… 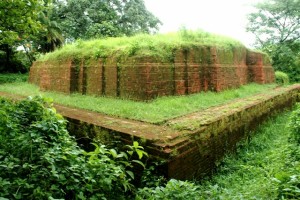 Charpatra Mura is a small but interesting… Rudrakar is a famous place in Shariatpur…. Balia Zamindar House or Palace is once…