If you want to go there, first you may go to Bhedarganj Upazila & from there you can go to Soigau Union.

How To Reach: Shariatpur District

It can be said that the communication system of Shariatpur was backward until 1992 definitely. There was only 3 km of road facilities in the district. The street was created as a result of the gradual improvement in the district. However, in every district, union, even with most of the rural road, network has been developed. Different regions of the country to the east of the capital and other districts Shariyatpur travel was the primary cause of water. Kamcarastaya be spies of the public at least 35 kilometers on foot Angaria Latest from the law suit was to launch in Madaripur. Back to Faridpur Sadar, Shariyatpur days would at least some villagers. With the gradual development of the street, was established ebansariyatapure district has reduced the problem. The boats was the main vehicle for rainy season. Before 1950, the region adjacent to the boat janasadharanagayanara Chandpur, Dhaka or in Narayanganj, had to travel. Downstream by boat south of the country, the business was in Barisal. Over time, with boat launches and steamers were replaced. Before bhojesbara, Sureshwar and pattite steamers were Gorge. But does allow the sthaneara steamer. In 1991, the new steamer pattite crowd. SHARIATPUR rainy season, WAPDA Wharf, Angaria, bhojesbara, Naria, bhedarganj, laukhola, damudya, Sureshwar, bandana, and the launch of the space to navigate through different places. Only in the dry season Sureshwar, WAPDA Ghat, laukhola and bandana launch crowd. The bahananauka rainy season. Since the trip was a little easier now going trawlers. In the dry season, however, can move rickshaw through the streets of mud. How many police with all the facilities so you can walk the streets. Shariatpur be done to live up to Sureshwar Madaripur movement. Baby or assessment can be collected from there. Through to the launch of a long time Shariyatpur public capital. Sureshwar dry season, WAPDA Ghat, laukhola and up launches at pattihate reach the masses. The shariatpur Mawa Ghat and mangalamajhiraghata be easily used to pass on.

Sadarghat, dhaka to Shariatpur via Launch

Referred where to eat at Shariatpur District. Click here

Kansat is an ancient village in Shibganj. The ancestors of the Zamider used to stay in a village called Koroi Jhakoir. Dossu sardar due to torture of Pandits moved to Muktogacha in Myemensingh. Later on they moved to Kansat. It is said that previously the king had a house known as Kongsohatta. From this area is known as Kansat.

Boro Katra (বড় কাটরা) was built between 1644 and 1646 AD to be the official residence of Mughal prince Shah Shuja, the second son of emperor Shah Jahan. The prince endowed it to his diwan and the builder of the serai, Abul Qasim. The word Katra may have originated from Arabic word Katara which means colonnaded building.

It is a historical and architectural monument located in Old Dhaka, Bangladesh.‘Katra or katara’ in Arabic and Persian means ‘Caravan (Karwan) Sarai’ or simply a ‘Sarai’. It is a palatial building dating to the reign of the Mughal dynasty in the Bengal region. It is situated to the south of Chowk Bazar close to the north bank of the river Buriganga.

Words from the Second inscription of north gateway: “Sultan Shah Shuja Bahadur was famed for deeds of charity-Wherefore being hopeful of the mercy of God his slave Abul Qasim al-Husainia-Tabtaba, As Simnai, Built this sacred edifice endowing it with twenty two shops attached to it, o the rightful and lawful condition that the official in charge of the endowment should expend the income derived from them upon the repairs of the building and upon the poor, and that they should not take any rent from any deserving person alighting there in, so that the pious act may reflect upon the monarch in this world and they should not act otherwise, or else they would be called on the day of retribution. This inscription was composed by Sad-ud-din Muhammad Sherazi” (Dacca, p.193 by prof. A.H. Dani)

Architectural Property: The building's architecture follows the traditional pattern of the Central Asia's caravanserai and is embellished as per Mughal architecture. It originally enclosed a quadrangular courtyard surrounded by shops and was overlooked by a row of 22 living cells in each wing. Two gateways were built in the northern and southern wing. The southern wing is a two-storeyed structure and extends 223' along the river. It is marked in the middle by the southern gateway, an elaborate three storied central archway framed within a projected rectangular bay that provides access to the courtyard. The underside of the arched alcove of the gateway is adorned with intricate plasterwork. The wall surface around the spandrels with plastered panels in relief contain a variety of forms such as four-centred, cusped, horse shoe and flat arches. Each wing is two storied and the corners are marked by tall octagonal towers.

Bhetarbandh Zamindar Bari or landlord house is located at Bhetarbandh village in Bhetarbandh union about 16 km far from Nageshwari sub district of Kurigram district. At the primary period of British ruling time, the headquarter of bhatarbandh pargana was at Rajshahi. After banned Permanent settlement law the bhatarbandh pargana headquarter transferred to Nageshwari sub district of Kurigram district. Wood made half part of the Landlord house is now lost. Now another half part of the house use as a union council office.

Bardhan Kuthi (বর্ধন কুঠি) is one of the historical places of Gaibandha district. It is situated near the Gobindaganj Upazila of Gaibandha. During the reign of British East-India company Raja Harinath (রাজা হরিনাথ) ruled the Bardhan Kuthi. During the separation of Indian subcontinent the last Ruler of Bardhan kuthi Raja Shoilesh Chandra (রাজা শৈলেশ চন্দ্র) Migrated to India from Bangladesh.

Due to the establishment of Gobindaganj college in this place, We can only observe the relics of Bardhan Kuthi. But it demands more research and discussion, By which we can discover the continuation of distinguish dynasty in Bardhan Kuthi. We may also reveal the valuable information of contemporary Zamindar’s and their lifestyle as well.

Kansat is an ancient village in Shibganj…. 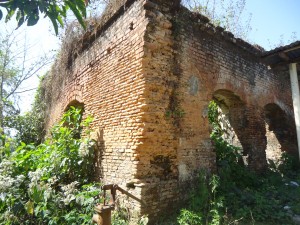